The Latest: Nipsey Hussle’s fiancee: ‘I’m lost without you’

LOS ANGELES (AP) — The Latest on the killing of rapper Nipsey Hussle outside his clothing store in Los Angeles (all times local):

The fiancee of Nipsey Hussle has broken her silence posting a tribute to the rapper on social media a couple days after he was fatally shot outside his clothing store in South Los Angeles.

Actress Lauren London posted a solo picture of Hussle along with other images that included her, the rapper and their family on her Instagram account Tuesday. She captioned her photos writing: “I’m lost without you.”

The 34-year-old London shared a photo of her smiling and hugging Hussle. Another photo showed the rapper raising their 2-year-old son in the air along with a selfie photo of the father and his son.

London’s tribute comes hours after 29-year-old suspect Eric Holder was arrested in the shooting death of Hussle on Sunday.

London’s representative did not immediately respond to an email requesting comment. 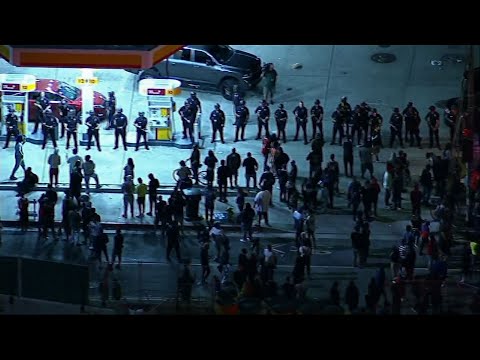 Police say they believe Holder killed Hussle and shot and injured two other men outside Hussle’s clothing store in South Los Angeles on Sunday afternoon, then climbed into a waiting car with a woman and fled.

Police had been circulating Holder’s name and photo with hopes that the public could help find him.

Police say the 33-year-old Hussle and Holder were acquaintances who got into a personal dispute that led to Holder returning with a gun and killing the rapper.

Authorities say a man matching the description of the suspect in Nipsey Hussle’s shooting death has been detained.

Los Angeles sheriff’s spokeswoman Nicole Nishida says a man matching the description of 29-year-old Eric Holder was detained Tuesday afternoon in Bellflower, a city about 20 miles southeast of where Hussle was slain Sunday.

Nishida says Los Angeles police detectives are on their way to determine if the man in custody is Holder. Police said earlier Tuesday at a news conference that they believe Holder fatally shot Hussle over a personal dispute.

Hussle was a respected and beloved artist for a decade in hip-hop inner circles, and broke out with his Grammy-nominated major label debut last year.

Social media sleuths are lighting up their streams with conspiracy theories connecting a documentary about a herbalist who claimed he had a cure for AIDS in the 1980s and the shooting death of Nipsey Hussle.

Hussle, who was killed Sunday in Los Angeles, was reportedly working on a film about Dr. Sebi, who in 1985 beat New York allegations of practicing medicine without a license after claiming his diet of low alkaline eating could cure AIDS and numerous other ailments.

Dr. Sebi, born Alfredo Bowman, died in a Honduran jail cell in 2016 after his arrest for carrying large sums of cash into his native country.

Nick Cannon says on Instagram he’ll carry on Hussle’s work and has posted photos and videos of Dr. Sebi along with mentions of Hussle.

Police have said they believe the man suspected of shooting Hussle on Sunday had a personal dispute with the rapper.

Los Angeles police Chief Michel Moore says the killing of rapper Nipsey Hussle involved a personal dispute between Hussle and the suspect identified by authorities and was not gang violence.

Moore told reporters Tuesday that 29-year-old suspect Eric Holder and Hussle knew each other, but Moore did not disclose any details about the nature of the dispute or how the two men knew each other.

Moore says the suspect repeatedly came up to Hussle and spoke with him, then returned with a gun and opened fire before fleeing in a car driven by an unidentified woman.

The chief called on Holder to surrender.

Los Angeles police Chief Michel Moore has called on the suspect in the killing of rapper Nipsey Hussle to surrender.

The chief told a televised press conference Tuesday that he was confident 29-year-old suspect Eric Holder was watching.

Moore urged Holder to go to a police station and turn himself in.

Moore says he was devastated by the killing of Hussle, who was shot outside his South Los Angeles clothing store on Sunday, a day before they were to have a meeting about the relationship between police and the inner city.

The chief says the attacker had repeatedly walked up to the artist and spoke to him, and then returned with a gun and opened fire.

Moore says Holder fled in a car driven by an unidentified woman.

Los Angeles Mayor Eric Garcetti is urging anyone who may have information about the killing of rapper Nipsey Hussle to call city homicide investigators.

Police have named 29-year-old Eric Holder as a suspect in the fatal shooting of Hussle outside his South Los Angeles clothing store on Sunday.

The mayor told reporters Tuesday that an increase in gun violence over the past week alone has killed 11 people and he intends to use city resources to roll back that rise.

Garcetti also called Hussle a gifted and brilliant artist who had a deep impact on the city.

Los Angeles police are seeking a 29-year-old man who they believe shot and killed Nipsey Hussle outside the rapper’s clothing store where he was trying to remake his community.

Los Angeles police Chief Michel Moore has scheduled a briefing Tuesday morning in which he will discuss how detectives came to identify Eric Holder as the man suspected of killing Hussle Sunday afternoon and wounding two others. Holder is suspected of fleeing in a 2016 Chevy Cruze with the license plate 7RJD742.

Moore also plans to discuss a wider upsurge of violent crime in the city. The press conference was scheduled before Holder was identified as a suspect. It will be held hours after a disturbance at a memorial for Hussle Monday night left at least 19 people injured, including two people taken to local hospitals in critical condition.

Dozens of police officers cleared the memorial site after a fight apparently broke out and a stampede ensued.