TALLINN, Estonia (AP) — Igor Smirnov was introduced to opiates the day his first son was born, when he got celebratory drunk and a neighbor injected him with an intoxicating extract of opium poppies.

“I’ve never tried anything better in my life,” he said. “It’s natural, it’s a clean high.”

Smirnov graduated to heroin during a stint in prison for robbery in the mid-’90s, as the Estonian economy was reeling from the 1991 collapse of the Soviet Union and drug abuse rates shot up. After the Taliban banned poppy production in Afghanistan, decimating the 2001 harvest, a new drug appeared to take the place of heroin on the quaint, cobbled streets of Estonia’s capital, Tallinn: Fentanyl. People called it “China White.”

Smirnov didn’t like the drug at first, but soon learned to live with it.

“Fentanyl costs too much,” he said. “If you use fentanyl, the dealers are simply collecting money because the high lasts a short time.”

Smirnov has lived the arc of illicit drug abuse in Estonia, a tiny Baltic state that for nearly two decades has battled a fentanyl epidemic so severe its overdose death rate was almost six times the European average.

Once fentanyl landed in Estonia, heroin disappeared. Even after poppies started growing again in Afghanistan and Estonian police choked off fentanyl supply in 2017, heroin didn’t come back. Instead, users turned to cocktails of other kinds of synthetic drugs, including amphetamines, alpha-PVP, a dangerous stimulant also known as flakka, and prescription drugs, harm reduction workers, users, public health officials and police told The Associated Press. 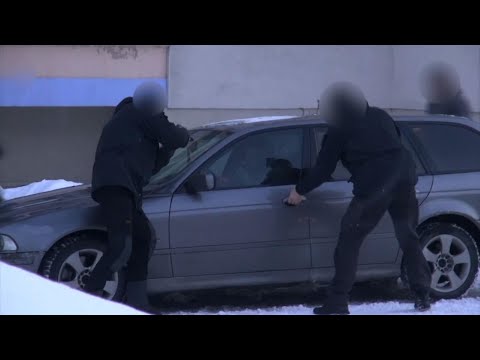 Video: Estonia won its war on fentanyl in 2017 after major police busts effectively cut off supply to the tiny nation. Overdose deaths plunged. But many users didn't return to heroin. Instead, they began injecting combinations of synthetic drugs. (March 26)

There are signs that the U.S. is on a similar path, tipping from plant-based drugs like heroin to synthetic ones like fentanyl and methamphetamine. That could herald big changes in global narcotics supply chains and cement the role of China -- an important source of illicit synthetic drugs -- as a vital link in the worldwide drug trafficking business.

“The trajectory is toward full synthetics,” said Daniel Ciccarone, a professor at University of California San Francisco School of Medicine, who researched heroin and opioid supply chains under a federally-funded study. “Name the major drug producers in world – Afghanistan, Colombia -- only people in the know would say China. Well, guess what? China.”

Fentanyls are easier to make and smuggle than heroin, and far more profitable to sell. One kilogram of fentanyl bought in China for $3,000 to $5,000 can generate over $1.5 million, according to the U.S. Drug Enforcement Administration. Fentanyl is also at least 30 times more potent, which can make it hard for users to return to heroin after getting used to the punch of synthetics.

“What happens after fentanyl is heroin doesn’t work anymore,” said Jaan Vaart, who used to use drugs and now runs a mobile outreach bus for Convictus, a harm reduction center in Tallinn. “Nobody wants to spend their money on water. Heroin was like injecting water after that.”

Estonia won its war on fentanyl in 2017. A massive law enforcement surveillance operation led to a clandestine laboratory hidden beneath a staircase in a brick home outside Tallinn. It was one of two major busts by police that year that effectively cut off fentanyl supplies to the tiny nation, which is roughly twice as big as New Hampshire. Police seized nearly 10 kilograms of fentanyl that year, up from 314 grams in 2016. Overdose deaths plunged after the busts.

What happened next took many by surprise.

“Something fishy is going on. They don’t like heroin after this. They prefer stimulants,” said Katri Abel-Ollo, a researcher at the center for addiction prevention of Estonia’s National Institute for Health Development. “They use different types of drugs, it’s like Lego construction. Our harm reduction workers say the mental state of patients is becoming worse and worse. They are unpredictable in how they behave.”

Ekaterina, a thin 30-year-old in methadone treatment, said if you know where to look you can still find fentanyl in Estonia. But people are increasingly into new things, especially something her friends call “crystal.”

She said crystal hits like a bunch of different drugs all at once. Her friend had the chemical formula for the main ingredient tattooed on her arm: C15H21NO, or alpha-PVP, the drug known as flakka.

“In Estonia, it’s new,” said Ekaterina, who did not want her last name published.

Flakka gained notoriety in the U.S. five years ago for the insane things it made people do: One user impaled himself on a fence. Another reportedly jumped off a bridge. A young woman in South Florida, also believed to be on flakka, ran through the streets naked and covered with blood screaming about God and Satan. After China banned the drug in late 2015, flakka use plummeted in the U.S.

New synthetics like flakka are bringing agitation and volatility to the streets of Estonia.

“A person who uses fentanyl compared to a person who uses alpha-PVP is still more in control,” said Aljona Kurbatova, head of the drug abuse prevention center at Estonia’s National Institute for Health Development. “They are mostly a danger to themselves, but with alpha-PVP, people don’t really control how they act.”

Looking ahead, Kurbatova sees two possibilities, neither good. Fentanyl comes storming back into Estonia and users with diminished tolerance overdose in droves. Another possibility is that alternative synthetics dominate the market, creating costly new health and social problems that Estonia’s drug treatment systems, calibrated to address opioid abuse, are ill-equipped to handle.

“Be afraid. Be very, very afraid,” she said. “It was so much easier when it was just heroin.”

Supply and demand drivers are fueling the rise of synthetics in other countries as well, according to a sweeping 2019 analysis by the RAND Corporation, a nonprofit policy research group headquartered in Los Angeles.

In U.S. regions with the most extensive exposure to fentanyl, synthetic opioids appear to be replacing heroin just as they did in Estonia, drug seizures and mortality data show. Rising overdose rates from methamphetamine, often with opioids present, and studies that show growing numbers of people taking both opioids and stimulants suggest users in the U.S. also may be turning to cocktails of synthetic drugs, as they did in Estonia.

“It’s kind of all we see now,” said Brian Boyle, DEA special agent in charge of New England. “We do not just see pure heroin anymore.”

It’s a global trend. Illicit drug markets in Latvia and parts of Canada also appear to be tipping from heroin toward fentanyls, while in Finland, heroin has been largely replaced by the semi-synthetic opioid buprenorphine, according to RAND.

“This is a new dawn,” said Bryce Pardo, a lead author of RAND’s report. “It’s no longer plant-based.”

That shift is potentially bad news for Mexican poppy farmers and good news for unscrupulous chemists at clandestine Chinese labs.

The rise of e-commerce, darknet marketplaces and the cryptocurrency bitcoin helped China emerge as a global supplier of novel synthetic drugs. Before Chinese suppliers exported fentanyls and fentanyl precursors, they were selling cathinones, stimulants sometimes sold as “bath salts,” cannabinoids and sending methamphetamine precursors to super-labs in Mexico, according to U.S. and international law enforcement agencies and officials, as well as U.S. legal cases and U.S. Treasury Department sanctions.

“China has been doing this for the last ten years,” Pardo said. “The synthetic opioid phenomenon is one chapter in the new psychoactive substances saga.”

The U.S. Drug Enforcement Administration says China’s vast, freewheeling chemicals industry is the largest source of synthetic opioids that end up in the U.S., either via mail directly or through Mexico.

Beijing disagrees. Chinese officials have lashed out at U.S. assertions that Chinese supply is at the root of America’s opioid problem and called for evidence to support claims that China is the top supplier.

DEA data shows that after China bans a specific kind of fentanyl, seizures of that substance in the United States drop, suggesting that China is a meaningful source of synthetic opioids. In May, China designated all kinds of fentanyls as a class of controlled substances, a move that appears to be having an impact.

“We are seeing less coming directly from China, and more fentanyl and precursors being routed through Mexico,” Mary Brandenberger, a DEA spokeswoman, said in an email.

The takedown of Estonia’s main Russia-linked fentanyl networks in 2017 did not appear to disrupt flows of fentanyl analogs, suggesting alternative supply chains may still be active.

“While fentanyl is reported to enter the country from Russia, the new fentanyl derivatives mainly originate in China,” according to the European Monitoring Centre for Drugs and Drug Addiction’s 2019 report on Estonian drug markets.

Estonian police told the AP they’d gathered a few investigative leads implicating Chinese sources but have struggled to trace supply chains definitively. Estonian customs said each year a handful of packages with synthetic drugs shipped directly from China are seized, but more may be transshipped via larger European countries.

China’s National Narcotics Control Commission told the AP that Estonian authorities have not asked for help. “We really have not received this kind of cooperation request from Estonian police, nor have we received contacts providing leads,” a NNCC spokesperson said.

Meanwhile, the volume of synthetic narcotics coming into Estonia by mail is growing and new psychoactive substances, or NPS, are proliferating.

Many long for the simpler days of heroin.

Today, Smirnov is in treatment and, like Estonia itself, is off fentanyl. He still yearns for a lost organic past, when he could head out into Estonia’s poppy fields and harvest the bulbs for a clean, natural high.

“Poppy liquid is better,” he said wistfully. “One hundred percent.”