Buttigieg to Democrats: Don’t get bogged down zinging Trump

DES MOINES, Iowa (AP) — Democratic presidential candidate Pete Buttigieg says President Donald Trump is “kind of like a Chinese finger trap — you know, the harder you pull, the more you get stuck” and warns that Democrats shouldn’t get bogged down in trying to “knock him flat with some zinger.”

In Iowa for the first time since officially launching his campaign , Buttigieg discussed how to defeat Trump after drawing an audience of more than 1,600 people at a Des Moines rally Tuesday night.

“We’ve got to acknowledge — without giving an inch on the racism or xenophobia that played a role in that campaign — we’ve got to also pay attention to the things that make people susceptible to that message and make sure we’re addressing them,” said the mayor of South Bend, Indiana.

The rally was one of the biggest campaign events yet for a 2020 contender in the Des Moines area, a particularly notable feat for a candidate who just over a month ago was barely registering in the polls. Buttigieg’s main task now is turning grassroots energy into a real, sustainable movement.

In an interview with The Associated Press, Buttigieg said Iowa — its caucuses produce the first votes of the presidential nominating season — “will be really central to our strategy.” 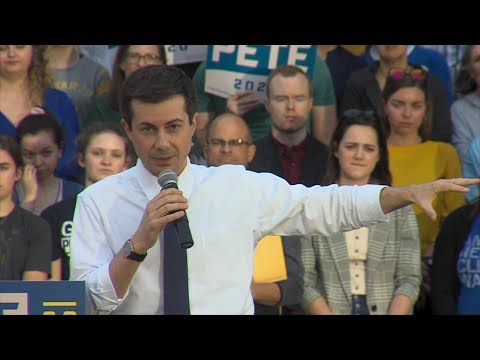 “There’s a political style here that rhymes a lot with my home territory in Indiana,” he said. “I think that the mechanics of a caucus really favor a style that involves a lot of engagement, which is how I like to practice politics ... of course there’s a simple logistical advantage of it being the one early state that’s within driving distance of my home.”

Asked whether Trump leaned on racial animus to win the White House, Buttigieg called the president out for playing “white guy identity politics.”

“By far the political movement that is most based on identity politics is Trumpism. It’s based on white guy identity politics. It uses race to divide the working and middle class,” he told the AP. “There are a lot of strategies to blame problems on people who look different or are of a different faith or even of a different sexuality or gender identity. ... It’s a cynical political strategy that works in the short term but winds up weakening the whole country in the long term.”

Buttigieg has argued that he’s uniquely positioned to take on Trump because he can appeal to the white working class voters who left the Democratic Party for the Republican. But in recent days, he’s acknowledged he needs to address the lack of racial diversity among supporters at his events.

In the AP interview, Buttigieg said he plans to make sure that “our organization and our substance reflect our commitment to diversity.” He said he’ll do that by hiring a diverse staff and by addressing a range of policies that affect minorities, including but not limited to criminal justice reform, education, homeownership and entrepreneurship.

“I think any white candidate needs to show a level of consciousness around issues like white privilege,” he said. But when asked whether he had experienced white privilege, he said that “part of privilege is not being very conscious of it, right?”

He added: “You’re much more conscious when you’re at a disadvantage than ... when you are on the beneficial side of a bias. But there’s no question that that’s a factor that has impacted people in many different ways. And we need to be as alive to it as possible.”

Buttigieg said that to be able to create a diverse coalition without alienating white working-class voters, issues of racial justice need to be discussed in a unifying way.

“I mean being pro-racial justice should not be skin off the back of any white voter,” he said. “I think there’s certainly an environment where sometimes these ideas are pitted against each other, where it’s suggested, for example, that connecting with white working-class voters somehow means that you have to walk away somehow from our commitment to racial justice — but our commitment to racial justice is part of the bedrock of the moral authority of the Democratic Party.”

The South Bend mayor has surged from a relatively unknown candidate in the field to a media darling who’s gained support in nationwide polling and posted a stronger-than-expected fundraising number in the first quarter. He’s drawn attention for his plainspoken style, and the historic nature of his candidacy, as the first openly gay contender in a same-sex marriage.

During the Des Moines rally, an audience member asked what he should tell his friends who say America isn’t ready for a gay president. Buttigieg replied, “Tell your friends I said ‘hi.’”

The impact of his personal life on the campaign was on striking display at both of his Iowa events Tuesday. During a town hall meeting in Fort Dodge, after Buttigieg spoke about the need for marriage equality, a protester stood up and shouted, “You betray your baptism!” He was escorted out.

Buttigieg joked to the crowd, “Coffee after church gets a little rowdy sometimes,” then added: “We’re so dug-in, in such passionate ways, and I respect that, too. That gentleman believes that what he is doing is in line with the will of the creator. I’d do it differently. We ought to be able to do it differently.”

In Des Moines, another protester shouted “Sodom and Gomorrah!” The crowd drowned him out with chants of “Pete! Pete! Pete!”

Asked by the AP how he would win over a protester like the one in Fort Dodge if he could sit down with him, Buttigieg said, “I’m not sure he would want to sit down with me,” but that he hoped others who have concerns about his candidacy would come to his events and ask a question, “so we could have a respectful exchange.”

“There are a lot of positions, there’s a wide range, with fringes, in our politics. That’s part of how politics works, and you shouldn’t be in this if you aren’t prepared to deal with that,” he said.

The turnout at the Des Moines event was unexpected, according to Polk County Democratic Party Chair Sean Bagniewski, who said Buttigieg’s team had predicted at most 200 people would show up. The campaign didn’t have any volunteers to take down information for enthusiastic supporters who wanted to be a part of the campaign.

“It’s a very narrow window to capture momentum and energy and attention, and if you miss the opportunity to match your staff and energy with the moment, you can miss your chance,” Bagniewski said.