EXPLAINER: What are cicadas and why do they bug some people?

Cicadas, red-eyed bugs singing loud sci-fi sounding songs, can seem downright creepy. Especially since the trillions of them coming this year emerge from underground only every 17 years.

But they’re not monsters or a plague of locusts. Once you get to know them, scientists say you can appreciate the wonder of these unusual creatures. So here are some answers to cicada question that may be bugging you.

They are a family of insects called magicicadas. They belong to a group of bugs that are different from other insects in that both the nymphs and adults have a beak they use to drink plant fluids. Adults have two sets of wings.

There are more than 190 known varieties of cicadas in North America and 3,390 of them around the world.

Most cicada species come out every year. In the United States, there are groups of cicadas that stay underground for either 13 years or 17 years. These are called periodical broods.

Except for one species in India and one in Fiji, only the U.S. gets these periodic cicadas.

Cicadas are not locusts. They are not grasshoppers. Those are different species. But when Europeans first arrived in America, some started calling them locusts and even grasshoppers.

Different groups of cicadas come out in different years in different places. This year’s group is called Brood X, as in the Roman numeral 10. There are 15 broods that still come out regularly. Others have gone extinct.

WHY SO MANY YEARS?

Some entomologists theorize that it’s an evolutionary defense mechanism. They stay underground so long that most predators will have no memory or history to look for them.

WHY SO MANY CICADAS?

That’s another evolutionary defense mechanism. Lots of creatures — even ants — eat cicadas. When they first come out and try to molt their skin, they can get stuck and are particularly vulnerable to attack.

They come out in large numbers so that some of them will survive. The survivors make the next brood, says University of Maryland entomologist Michael Raupp.

WHERE WILL THEY BE THIS YEAR?

This is one of the largest broods seen by the most people.

WHEN WILL THE NEXT BROODS COME OUT?

Brood XIII, a 17-year cicada, will come out in Illinois, Indiana, Iowa, Michigan and Wisconsin.

Dogs have been known to binge and eat too many. But that’s a function of amount, not the bugs themselves.

The only things cicadas can harm are young trees if they climb up them and try to plant eggs on weak young limbs. Experts say netting young trees protects them. Do not use pesticides.

When cicadas die, they fertilize the trees and may smell a bit. Trees tend to bloom more the year after a cicada emergence, says cicada expert Gene Kritsky.

Some people are scared of the way they look or are upset by their smell. A lot of people are frightened of bugs. And when they come out in mass numbers, they can be hard to avoid. Raupp suggests staying indoors or heading to the beach, which they don’t like.

There’s also the inconvenience factor. They can seem to ruin weddings and large events just because there’s so many of them. 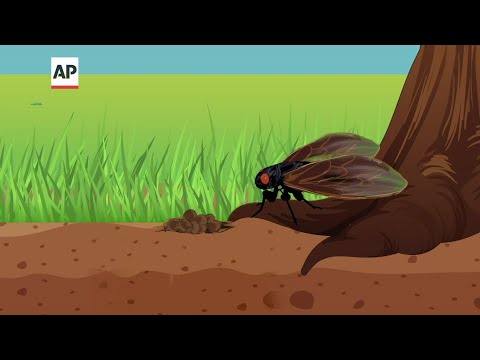 WHY DO CICADAS SING LOUDLY?

It’s all about sex.

Cicadas sing by flexing small drum-like organs in their abdomens, and what you hear in the trees is called a chorus. It’s nothing but males trying to attract females by singing to them. Think of them as the insect version of a boy band. Each species has their own song. When the females are interested, they twitch their wings.

It is so loud because they sometime want to woo a female far away. Get thousands of them together and they can reach 105 decibels, which is louder than a lawnmower.

WHERE DO THEY LAY EGGS?

Female cicadas make slits in small tree branches and usually lay 20 to 30 eggs in each slit. A female can lay 400 to 600 eggs in a lifetime. The eggs hatch in late July to early August. Then the cicadas fall to the ground and immediately burrow underground.

WHAT DO THEY DO UNDERGROUND?

Periodic cicadas spend most of their 13 or 17 years underground, where they feed off plant roots and their bodies grow and change.

WHEN DO THEY ARRIVE?

Any day now. Early ones are already out. In Tennessee and other southern states they’ve started coming out in large numbers. They don’t come out in mass until the soil temperature about 8 inches (20 centimeters) deep is 64 degrees Fahrenheit (18 Celsius).

WHEN DO THEY LEAVE?

Once the males mate, they die. After females lay their eggs, they die.

So except for the eggs, they’ll be gone by around July 4, Cooley says. Annual cicadas can last until October.

When a lot of them die in the same place, it can “smell like roadkill,” Cooley says. “Get a shovel or a rake and move them somewhere far away,” he suggests.

You bet. There’s even a University of Maryland cookbook. You can start with cicada dumplings appetizers, move to “El Chirper Tacos” and finish off with “Chocolate-Chip Trillers,” which are cicada cookies, Raupp’s favorite.

“They have a buttery texture, a delicious, nutty flavor, probably from the tannins, from the roots of the trees on which they fed,” Raupp says. “And they’re going to be really good with a Merlot.”

ARE THEY BEING TRACKED? Bug experts watch them whenever they come out, but now you can too.

Kritsky has a Cicada Safari app where people can track and report cicada sightings.

HAVE CICADAS MADE HISTORY?

Brood X got so loud that in 1902 at Arlington National Cemetery that they almost drowned out President Theodore Roosevelt, who was known for his booming speaking voice, Kritsky says.

In 1970, Bob Dylan was getting a honorary degree at Princeton during a Brood X emergence. It spurred him to write the song “Day of the Locusts.”