Amid drought, Colorado rafters flock to oases while they can

FORT COLLINS, Colo. (AP) — Across Colorado, parched rivers are at some of their lowest levels on record. But on one still spared by the drought, boisterous children and guides bob along as water splashes into their blue inflatable rafts.

The summer activity on the Cache La Poudre River in northeastern Colorado reflects the precarious situations of rivers and lakes in dry regions, with rafters and boaters eager to enjoy the remaining oases while they can and businesses hoping to eke out a season threatened by drought.

“Any time that you make your living off of Mother Nature, you definitely partner with a pretty turbulent environment,” said Kyle Johnson, whose whitewater rafting company, Rocky Mountain Adventures, has been fully booked seven days a week.

Johnson said the booming demand on the river is a “redemption” from the last rafting season, which was cut short by the pandemic and wildfires. But the healthy water levels on the river might not last much longer. Johnson notes the drought could end this season prematurely as well.

“It’s a little bittersweet,” said Savannah House, a Fort Collins resident who was recently rafting on the Poudre, noting the extreme conditions in other parts of the state. 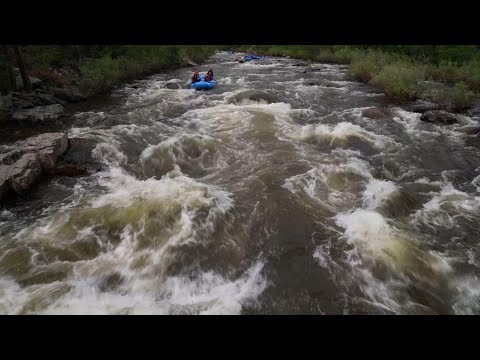 For years, those who rely on rivers and streams for their livelihoods have struggled with the hotter, drier weather brought on by climate change.

The rising temperatures have meant dwindling and less reliable amounts of the mountain snowpack that normally drains from high altitudes to replenish water levels. What does trickle down is more likely to get absorbed by the dry, thirsty ground before it reaches the river — a predicament many places were already experiencing this year.

“We really are seeing the impact of the dry conditions last year impacting all of our watersheds and water resources,” said Karl Wetlaufer, a hydrologist for the federal Natural Resources Conservation Service.

Now the heat wave gripping the region is deepening worries, affecting even simple recreational activities once taken for granted.

The Yampa River in northwest Colorado is experiencing some of the lowest stream flows on record due to below average snowpack, increasingly dry soil, and the spring’s hot, dry weather. In Steamboat Springs, a recreational hub along the river, rafting and kayaking ended a few weeks ago, and fishing and tubing could soon be over too if the water dips much lower.

“We have known since 2002, when this mega-drought started, that our climate has shifted to a hotter and drier future. And the future is now,” said Kent Vertrees of Friends of the Yampa. The conservation group has received funding from the Walton Family Foundation, which also supports The Associated Press’ coverage of water and environmental policy.

To alleviate conditions, conservation groups and water agencies created a pathway to release water from an upstream reservoir. That helped “keep the fish wet, cool the river down and increase the oxygen levels in the river,” Vertrees said.

Cottonwood trees have also been planted to shade the river and cool it down when the water is running low. It’s unclear how much such measures will help maintain water levels.

The Associated Press receives support from the Walton Family Foundation for coverage of water and environmental policy. The AP is solely responsible for all content. For all of AP’s environmental coverage, visit https://apnews.com/hub/environment.