GOVERNMENTS & CENTRAL BANKS: National economies hammered by the pandemic are coming back on line to varying degrees, largely based on how recently peak infections arrived.

— March jobless claims in France jumped 7% — the biggest single-month increase since the 1990s. Yet the Labor Ministry figures released Monday reflect only a sliver of the upheaval.

More than 10 million are receiving payments as part of a French program to keep shuttered companies from firing workers. Half of France’s private sector workforce is on temporary unemployment.

— The Czech Republic is allowing smaller stores to reopen in its latest phased return to normalcy. Stores up to 2,500 sq. meters (26,900 sq. feet) can operate, with social distancing measures in place. Three Czech plants of Skoda Auto that belong to Volkswagen renewed production on Monday. 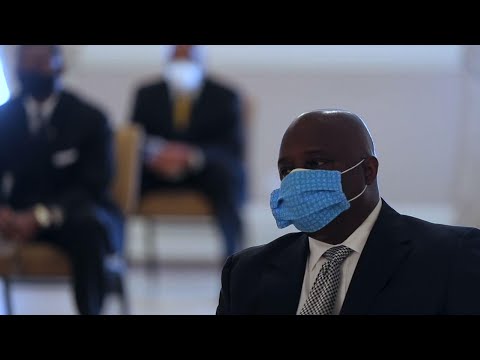 If Larry Hammond had died in a normal time, he would've had a funeral befitting a Zulu king. But since only 10 could attend the service, friends organized a parade of cars outside the family home, honoring from afar a life lost to coronavirus. (AP Video)

ENERGY: Crude price have crashed almost 80% since the beginning of the year and thousands of oilfield workers have lost jobs. On Monday, contract driller Diamond Offshore filed for bankruptcy protection.

— Crude prices plunged 27% Monday in the U.S. to just above $12 per barrel, and falling prices are ravaging national economies in the Middle East.

— Utilities registered drops in power usage early this year due to warm weather. The outbreak has extended that trend, according to Bank of America. New York and California had power loads drop between 6% and 11% below normal on average during the past five weeks.

Analysts note that several states are planning to re-start at least some economic activity, but say there is significant uncertainty around timing for fully reopening the economy.

— Profits for energy companies in the S&P 500 could plunge 115% compared with last year, according to S&P Capital IQ. That will likely mean defaults and debt downgrades, which would ripple outward beyond the energy sector and negatively affect credit markets.

SURVIVAL MODE: Cash burn has become a universal metric for companies trying to ride out the pandemic with zero revenue coming in.

— General Motors canceled its quarterly dividend for the first time March of 2014, nearly five years after emerging from a government-funded bankruptcy brought on by the Great Recession. GM is also suspending share buybacks and it’s extending $3.6 billion of a three-year revolving credit line until April of 2022.

GM’s North American factories have been shut for more than a month. Automakers generally book revenue when they ship vehicles to dealers, so the lack of production has cut off most of GM’s income.

— Cruise operators that had incorporated outside of the U.S., even though their headquarters are in places like Miami, found themselves adrift when government relief checks went out. There is little appetite to extend relief to companies that sought to avoid higher U.S. taxes. Still, the companies employ or are partially responsible for tens of thousands of jobs.

Two cruise lines said in regulatory filings over the weekend that they had found a lifeline in Germany. Royal Caribbean obtained a 12-month debt holiday from Euler Hermes Aktiengesellschaft, Germany’s export credit agency. The deal will provide Royal Caribbean with $250 million through April 2021. Norwegian Cruise Lines obtained $386 million through a similar debt holiday with Hermes. The companies can’t pay dividends or repurchase stock through the term of the loans.

CHECKED OUT: The lodging industry has been carved out by the arrival of coronavirus and are in desperate need of cash.

— The occupancy rate at InterContinental Hotels that remain open are in the low to mid 20% range. The company said in a regulatory filing Monday that about 10% of its U.S. hotels are closed, while approximately 50% are closed in the Europe, Middle East, Africa and Asia region. In China, 12 of its 470 hotels are closed.

EASING BACK: Boeing is gradually bringing some production back on line. It said Monday it will resume production at a South Carolina plant where two-aisle 787 passenger jets are built. The company said most employees will return Sunday night or Monday. The plant has been shut down since April 8 after employees tested positive for the virus that causes COVID-19. Boeing recently resumed production at Seattle-area assembly plants.

MORE TESTING: Kroger Health, the healthcare division of The Kroger Co., said Monday it will expand its drive-thru COVID-19 testing to 50 locations in more than 12 states. The company said it expects to perform up to 100,000 tests by the end of May. Kroger said customers can fill out an online form to determine if they should be tested.

MARKETS: This is the busiest week of the earnings seasons, with nine Dow components reporting quarterly results.

— Stocks around the world rose Monday as governments prepare to gradually lift restrictions they imposed on businesses to slow the sweep of the coronavirus pandemic.