SIOUX FALLS, S.D. (AP) — The Centers for Disease Control and Prevention on Thursday recommended that the operators of a South Dakota meatpacking plant where about 800 workers contracted the coronavirus implement a strict social distancing policy and find ways to overcome language barriers.

The CDC memo specifically addressed the situation at the Smithfield Foods plant in Sioux Falls but that also may give an indication of the broader recommendations that the agency is working on for meat processing plants nationwide. Smithfield closed the plant indefinitely because of the outbreak and faced complaints that it wasn’t doing enough to protect its workers.

A CDC team toured the plant last week and reported that the company had slowed down production lines to space workers farther apart and installed about 800 Plexiglas barriers along the lines. But even though there were only a few workers left in the plant, some were still gathering closer than 6 feet apart when not at their work stations or not wearing face masks, the team found. 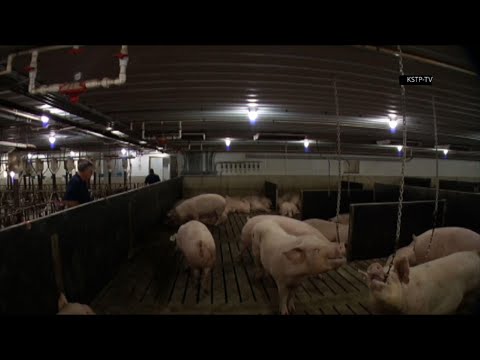 Smithfield is also planning to give workers a new face mask every day and to equip production staff with face shields, according to the CDC.

The CDC memo also stresses the importance reconfiguring parts of the plant to accommodate social distancing, including making sure workers don’t congregate in locker rooms, cafeterias or break areas.

South Dakota Gov. Kristi Noem said she would like to see the plant reopen as soon as possible.

Keira Lombardo, a spokeswoman for Virginia-based Smithfield Foods, said the company was still examining the report. Smithfield has not indicated when it might reopen the plant, which produces roughly 5% of the country’s pork.