NEW YORK (AP) — The official death toll from the coronavirus soared in New York City on Tuesday after health authorities began including people who probably had COVID-19, but died without ever being tested.

Officials reported 3,778 “probable” deaths, where doctors were certain enough of the cause of death to list it on the death certificate, and 6,589 confirmed by a lab test. Combined, that would put the total fatalities in the city over 10,000.

The change in the city’s accounting of deaths came after officials acknowledged that statistics based only on laboratory-confirmed tests were failing to account for many people dying at home before they reached a hospital or even sought treatment.

“Behind every death is a friend, a family member, a loved one. We are focused on ensuring that every New Yorker who died because of COVID-19 gets counted,” said Health Commissioner Dr. Oxiris Barbot. “While these data reflect the tragic impact that the virus has had on our city, they will also help us to determine the scale and scope of the epidemic and guide us in our decisions.”

New Yorkers continue to die at an unnerving pace even as the number of patients in hospitals has leveled off.

Earlier Tuesday, officials said 778 deaths were recorded statewide Monday, bringing New York’s total to more than 10,800. That figure, though, did not factor in the probable deaths now being counted in New York City. 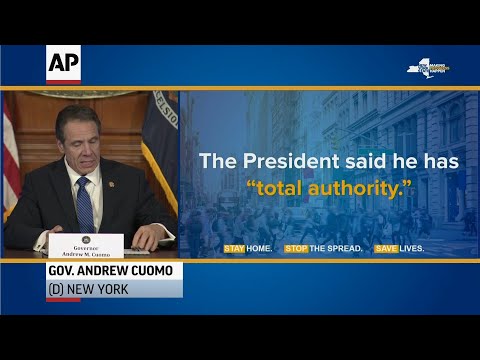 Here are other developments in the coronavirus outbreak:

The Democratic governor criticized Trump’s assertion Monday that “when somebody is president of the United States, the authority is total.”

“His proclamation is that he would be king, that’s what a king is,” Cuomo said at his daily briefing. “A king has total authority. That statement cannot stand.”

The Republican president made his comments after Cuomo and governors on both coasts announced multi-state compacts to coordinate reopening society amid the global pandemic.

Cuomo said restarting the economy must be done cautiously, or the hard-won gains of the past month could be quickly lost.

In a tweet Tuesday, Trump appeared to liken the governors to mutinous crew members in the movie “Mutiny on the Bounty.”

Cuomo said the president was “clearly unhappy.” But after taking aim at the president’s comments Tuesday in multiple TV appearances and during his state Capitol briefing, Cuomo said he would not engage in a fight with him.

“The president is clearly spoiling for a fight on this issue,” Cuomo said. “This is too important for anyone to play politics.”

The total number of people hospitalized Monday was down slightly to 18,697, the first decrease since mid-March. Total hospitalizations have been flat recently, and Cuomo believes the state could be inching past the peak of the crisis.

One big health system, Northwell Health, said it has discharged over 3,330 coronavirus patients over the last eight days and that the number of disease patients in its hospitals is the lowest it’s been since April 3.

Meanwhile, New York City’s once-overwhelmed 911 system is now seeing a more normal volume of medical calls, another sign the crisis could be ebbing.

The fire department, which runs the city’s EMS system, said it received 3,932 calls requesting ambulances Sunday, down from a record high of 6,527 on March 30. The average volume last March and April was just over 4,000 calls.

Sunday was the sixth straight day that the city’s medical call volume was lower than the previous day.

The fire department said it’s too early to know exactly why volume has dropped.

MADE IN NEW YORK

State and city officials have stressed the need to greatly expand coronavirus testing before any relaxation of social distancing guidelines can be contemplated. Health care workers have complained throughout the virus pandemic of shortages of personal protective equipment like gowns and face shields.

Sen. Charles Schumer and Rep. Alexandria Ocasio-Cortez asked the federal government to help pay for funerals for the state’s thousands of dead.

The two Democrats appeared together in the hard-hit neighborhood of Corona, Queens, part of Ocasio-Cortez’s district, to ask the Federal Emergency Management Administration to approve disaster funeral assistance across New York.

“It’s bad enough people are losing their jobs, and don’t have food to eat, are separated from their families and loved ones,” Schumer said. “But to not be able to give a decent funeral and burial to someone who is near and dear to you is outrageous.”

Ocasio-Cortez said the coronavirus is “decimating an already vulnerable community” and funeral costs are one more burden.

More than 4,000 trains, buses and ferry boats across the New York City plan to sound their horns in unison Thursday to honor transportation workers keeping the system running during the coronavirus crisis.

Each vehicle will give two one-second horn blasts at 3 p.m., the Metropolitan Transportation Authority said. The Port Authority, New Jersey Transit, Amtrak and the Staten Island Ferry are also participating.

The city’s commuter infrastructure has been operating at a reduced schedule, serving mainly to health care workers and other essential employees.

The MTA, which runs the city’s subways and buses, said 59 employees have died of coronavirus and more than 2,200 workers have tested positive for the disease.

Former Democratic state Assemblyman Richard Brodsky died last week of a heart attack and not of complications from the coronavirus as originally suspected. His daughter told The New York Times that the 73-year-old had shown symptoms consistent with COVID-19, but also had a heart condition. Test results returned after he died showed he did not have the disease. The Democrat represented parts of Westchester County from 1983 to 2010.