Trump said the diagnosis was not good news, but added, “What is good news is that he is the greatest fighter and winner that you will ever meet.″

A bearded Limbaugh, seated next to first lady Melania Trump, looked stunned as the president announced the award. He eventually stood and saluted Trump and offered a thumbs-up to Republicans in the House chamber.

Melania Trump presented the award to Limbaugh, placing the blue-ribboned gold medal around his neck.

Trump thanked Limbaugh for “decades of tireless devotion to our country” and said the award recognized the millions of people a day Limbaugh speaks to and inspires, as well as his charity work.

Limbaugh said Monday he intends to work as much as possible. He also said he had focused more “intensely” in the past two weeks on what he called his “deeply personal relationship” with God. 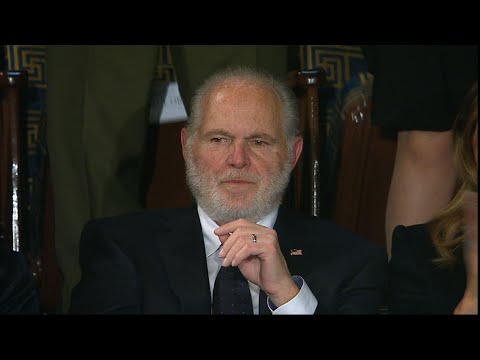 Limbaugh is widely credited as key to Republicans’ takeover of Congress in 1994 and has strongly supported Trump and other Republicans.

Limbaugh has frequently been accused of hate-filled speech, including bigotry and blatant racism through his comments and sketches such as “Barack the Magic Negro,” a song featured on his show that said former President Barack Obama “makes guilty whites feel good” and called Obama “black, but not authentically.”

His popularity has survived brickbats and thrived despite personal woes. In 2003, Limbaugh admitted an addiction to painkillers and entered rehabilitation.