EXPLAINER: Chauvin jury could stay anonymous for a long time

MINNEAPOLIS (AP) — The judge who oversaw Derek Chauvin’s trial in George Floyd ’s death said the jury would remain anonymous until he deemed it safe to release their names, in an effort to not just protect the 12 jurors from outside influence but also to preserve Chauvin’s right to a fair trial.

Hennepin County Judge Peter Cahill hasn’t said how long their names might stay secret. He told potential jurors in the runup to the trial that their names would come out eventually, but assured them he would protect their privacy as long as he feels it’s necessary.

HOW LONG MIGHT IDs OF CHAUVIN JURY STAY SECRET?

Names of jurors and other data such as questionnaires normally become public soon after trials in Minnesota. But in a case similar to Chauvin’s — the 2019 trial that led to the conviction of former Minneapolis Officer Mohamed Noor in the shooting death of Justine Ruszczyk Damond — Hennepin County Judge Kathryn Quaintance waited more than 18 months before agreeing to release the names.

Even then, it took legal action from the Star Tribune to get the names unsealed. And the judge released only names, with no additional identifying information. 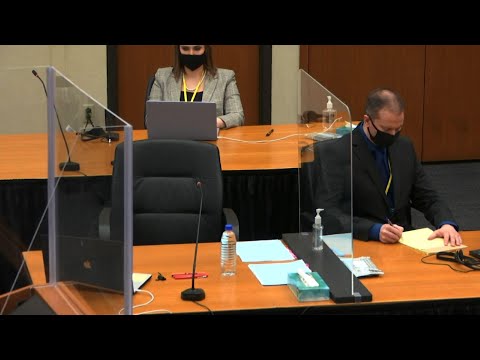 A jury has been seated for the trial of former Minneapolis police officer Derek Chauvin in George Floyd’s death, with opening statements set for March 29. The final juror was chosen Tuesday, more than two weeks after the process began. (March 24)

HOW COMMON ARE ANONYMOUS JURIES?

They’ve become more common in the U.S. in recent decades. Sometimes judges approve them in organized crime cases. Examples include the 1987 and 1992 trials of John “Teflon Don” Gotti and the 2019 trial of Joaquín “El Chapo” Guzmán.

There was an anonymous jury for the 1993 trial of Laurence Powell and Stacey Koon, two of the Los Angeles police officers accused of beating Black motorist Rodney King, as well as for the trial of three African American defendants accused of beating white trucker Reginald Denny in the riots that followed the officers’ acquittal.

But judges have also approved them in trials, including civil cases, in which the only risk to jurors was the possibility of being approached for news interviews afterward, according to the Freedom Forum Institute.

Minnesota first empaneled an anonymous jury for the 1993 trial of alleged gang member Shannon Bowles in the slaying of Minneapolis police Officer Jerry Haaf in 1992, according to the William Mitchell Law Review. The Minnesota Supreme Court ruled in 1995 that keeping the jurors’ identities under wraps did not infringe on Bowles’ right to an impartial jury or his right to be presumed innocent, and set out rules for future anonymous juries.

WHAT IS KNOWN ABOUT THE CHAUVIN JURY?

Chauvin’s jurors were referred to only by number in open court. Cahill and attorneys for both sides tried to avoid eliciting identifying information from them during the selection process. The video feed did not show the jurors. According to the court, six of the jurors were white, and six were Black or multiracial.

The foreman was Juror No. 19, a white man in his 30s who said during jury selection that he works as an auditor. The man described himself as someone who tries to resolve conflict and make decisions based on facts, not emotions, and said he has a friend who is a canine officer with the Minneapolis Police Department.

That man said he supported Black Lives Matter in general but disagreed with actions by some BLM activists. He had an unfavorable opinion of Blue Lives Matter. He wrote in his questionnaire that he had heard Floyd was on hard drugs but didn’t think it should affect the case. “Whether you are under the influence of drugs doesn’t determine whether you should be living or dead,” he wrote.