WASHINGTON (AP) — The two doctors spread out their charts on the Resolute Desk in the Oval Office.

The projections were grim: Even if the U.S. were to continue to do what it was doing, keeping the economy closed and most Americans in their homes, the coronavirus could leave 100,000 to 200,000 people dead and millions infected. And the totals would be far worse if the nation reopened.

Those stark predictions grew even more tangible and harrowing when paired with televised images of body bags lined up at a New York City hospital not far from where President Donald Trump grew up in Queens.

Latest on the Global Outbreak:

The confluence of dire warnings and tragic images served to move the Republican president off his hopes for an Easter rebirth for the nation’s economy.

But while Trump sided with the White House doctors over its economists, at least for now, the decision shed light on a West Wing beset with divisions and a commander in chief torn between an instinct to embrace the image of a wartime president fighting an invisible enemy and the desire to protect the nation’s bottom line as he barrels into a bruising reelection fight. 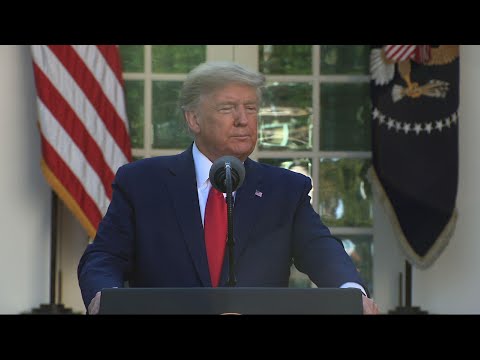 The abrupt change in Trump’s tone was startling: Easter was no longer going to be the sunrise after blackest night. Instead, it could be the darkest moment before dawn.

“We’re thinking that around Easter that’s going to be your spike. That’s going to be the highest point we think, and then it’s going to start coming down from there,” Trump said Monday on “Fox & Friends.” “The worst that can happen is you do it too early and all of a sudden it comes back. That makes it more difficult.”

The bleak forecasts were carried into the Oval Office by Dr. Anthony Fauci and Dr. Deborah Birx, who displayed to Trump projections that, on the low end, could yield 100,000 American deaths from COVID-19. One model showed that deaths could have soared past 2 million had there been no mitigation measures.

“We showed him the data. He looked at the data. He got it right away. It was a pretty clear picture,” Fauci told CNN on Monday. “Dr. Debbie Birx and I went into the Oval Office and leaned over the desk and said, ‘Here are the data, take a look.’ He just shook his head and said, ‘I guess we got to do it.’”

But as is often the case with Trump, it also took the power of images to prompt him to act.

Over the weekend, the death count in New York City skyrocketed, the silence of the city’s empty streets shattered only by ambulance sirens. Makeshift medical tents were hastily erected in Central Park. And hospitals, including Elmhurst Medical Center in Queens, not far from Trump’s childhood home, were so overwhelmed that patients were lying in hallways and corpses stowed in refrigerated trucks.

“This is essentially in my community, in Queens, Queens, New York,” Trump said. “I’ve seen things that I’ve never seen before.”

Aides likened Trump’s emotional response to his reaction to the 2017 pictures of dead Syrian children that prompted him to give the order for the first air strike of his presidency. Trump also invoked some friends — he did not identify them — who he said are battling the virus.

“I have some friends that are unbelievably sick,” he said Monday in a Rose Garden press conference. “We thought they were going in for a mild stay and in one case, he’s unconscious — in a coma.”

The weekend decision also revealed the sharp divides among those advising Trump, both inside and outside the West Wing.

For weeks, those in the White House who warned that the doctors’ strict recommendations would cripple the economy — and Trump’s reelection chances — had the president’s ear and pushed him toward the idea of restarting business in the states where infections were low.

Trump’s decision to extend national guidelines to clamp down on activity left them disappointed.

Stephen Moore, a former Trump adviser who had been pushing the administration publicly and privately to roll back restrictions in places with low infection rates, said the economic impact would grow worse every day that the shutdown continues, with more bankruptcies and more jobs lost. He had urged Trump to begin to reopen in places like Idaho, Iowa and Nebraska, far from the infection hot spots.

But Trump was swayed by arguments that the fiscal pain would be worse if the economy was reopened and then forced to be shut again.

As in the early, chaotic days of his administration, Trump’s White House has become increasingly siloed in recent weeks, with different working groups functioning separately and sometimes in competition. Members of Trump’s coronavirus task force, led by Vice President Mike Pence and including Fauci and Birx, did not know that Trump would be floating the idea of a quarantine of the New York area over the weekend — and then quickly moved to walk him back, according to three administration officials not authorized to publicly discuss private conversations.

The president is getting conflicting advice from outside the White House as well.

While some Republican governors, like Henry McMaster of South Carolina, have urged the president to reopen the economy, Gov. Ron DeSantis of Florida considered banning travelers from hot spots like New York from entering his state, which experts believe is poised to see a surge in coronavirus cases.

After speaking with DeSantis, Trump mused to reporters Saturday about a quarantine of New York, as well as parts of New Jersey and Connecticut, blindsiding their governors and raising questions about federal authority.

Even if the measure was unenforceable, Trump thought it could be a signal to supporters elsewhere that he was walling off a virus hot zone comprised of three Democratic states. But Fauci and other advisers persuaded him that it would accomplish little except ignite worry.

Like forecasts for a monster hurricane, the pandemic projection models can disagree with one another. But the coronavirus models all agree that this outbreak and its consequences are extremely serious.

Birx singled out one by the Institute for Health Metrics and Evaluation at the University of Washington in Seattle, suggesting it’s close to how government experts see things. That model predicts more than 84,000 total U.S. deaths through early August, with the highest number of daily deaths — an estimated 2,200 — occurring April 15.

That would be three days after Easter.

For most people, the new coronavirus causes mild or moderate symptoms, such as fever and cough that clear up in two to three weeks. For some, especially older adults and people with existing health problems, it can cause more severe illness, including pneumonia, or death. The vast majority of people recover.

The virus has caused a global pandemic that has sickened about 800,000 people and killed tens of thousands, according to figures compiled by Johns Hopkins University.