WASHINGTON (AP) — President Donald Trump is urging voters to back Republicans in the midterm elections, saying the party “must ALWAYS hold the Supreme Court.” But the Supreme Court, while shaped by political changes, is the unelected branch of government that can’t be held by any party.

Trump was responding Wednesday to an op-ed column in The New York Times written by retired Justice John Paul Stevens, who called for the repeal of the Second Amendment to allow for gun control legislation.

TRUMP: “THE SECOND AMENDMENT WILL NEVER BE REPEALED! As much as Democrats would like to see this happen, and despite the words yesterday of former Supreme Court Justice Stevens, NO WAY. We need more Republicans in 2018 and must ALWAYS hold the Supreme Court!”

THE FACTS: Gun rights activists have seized on the column by Stevens, who was a registered Republican but a member of the court’s liberal wing, as proof that Democrats are trying to undermine the Second Amendment guaranteeing the right to bear arms. Democratic leaders haven’t called for repealing the amendment, which they say does not preclude reasonable gun control measures.

And unlike the elected branches of government, no party holds the Supreme Court. Presidents nominate justices, who must be confirmed by the Senate. 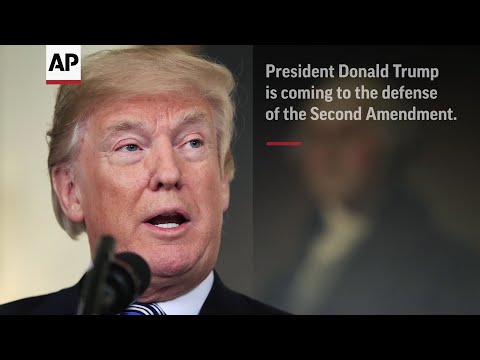 Until recently, party label and ideology did not always go hand in hand. Chief Justice Earl Warren was the bane of conservatives in the 1950s and 60s, but he was appointed by Republican President Dwight Eisenhower. Justice Byron White, appointed by Democratic President John F. Kennedy, was one of two dissenting votes against a woman’s right to abortion in the landmark Roe v. Wade case. Stevens and David Souter, two of the dissenters in the court’s 2008 decision in favor of gun rights, also were Republican appointees.

But Trump is right that Republican-nominated justices have formed a majority of the Supreme Court for nearly 50 years and, since Stevens’ retirement in 2010, ideology and party have aligned. The five more conservative justices were appointed by Republicans, while the four more liberal justices were Democratic nominees.

That’s why the stakes were so high after conservative Justice Antonin Scalia died in 2016. If President Barack Obama’s nominee, Merrick Garland, had been confirmed, it would have flipped the ideological and partisan majority of the court.

Republican senators kept the seat open and, when Trump unexpectedly won election in 2016, were delighted to confirm Trump’s nominee, Neil Gorsuch, over Democratic objections. Trump has pointed to his nomination of Gorsuch and other federal judges as among his biggest accomplishments.

Republicans would have the opportunity to cement control of the court if Justice Anthony Kennedy — the most moderate of the conservatives — or one of the older more liberal justices, Stephen Breyer or Ruth Bader Ginsburg, were to retire with Trump in office and Republicans in control of the Senate.

Recently changed Senate rules make it relatively easy for the president to get his pick confirmed since Trump’s fellow Republicans control the Senate and Democrats have little ability to delay a nomination.

The worry for Trump is that Republicans have the barest Senate majority and could lose control of the chamber in the November elections. Trump nominees would find it considerably more difficult to be confirmed in a Senate run by Democrats still seething over the Republican refusal to consider Obama’s Garland nomination.