Taste of the Tour: A signature dessert in Kirk Douglas’ wake

SAINT-SAVIN, France (AP) — It’s a Tour de France dilemma: When you’ve found a gem of a hotel with a knockout restaurant along the race route, do you greedily keep the precious address to yourself?

Then again, a pleasure shared is a pleasure doubled, and Le Viscos in the picture-postcard village of Saint-Savin — skirted by the Tour on its second weekend — is certainly a pleasure.

Hollywood actors Kirk and Michael Douglas and late French rocker Johnny Hallyday are among those who have made the pilgrimage for the belt-busting fine cuisine of chef Jean-Pierre Saint-Martin.

His son, Alexis, has now taken the reins in the kitchen from his 70-year-old dad. The hotel that dates back to 1840, when it was a stop for travelers to stable their horses, has been in their family for seven generations.

Alexis, 39, sees himself both as a guardian of the family tradition of offering hospitality and as a culinary inventor not hidebound by that long tradition.

His exquisite dessert eclairs, filled with tangy stewed strawberries and cream as light as a cloud, neatly encapsulate his philosophy. Topped with nuggets of light biscuit that crack between the teeth, his creation is a surprising and welcome contemporary reboot of the classic custard-filled choux-pastry found in all French patisseries. 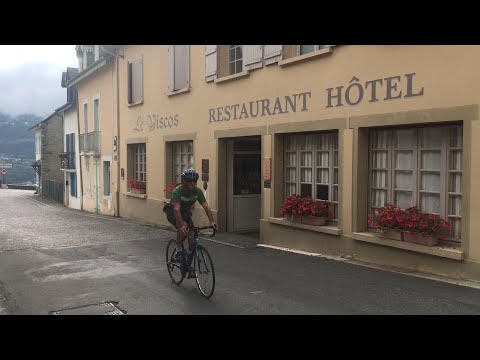 “As the seventh generation, it’s our duty to carry on this tradition and, I hope, pass it to the eighth,” Alexis says. “My job can be taught but is first and foremost a passion.”

BREAD AND BUTTER: When one French rider starts to fade, another comes to the fore at what is shaping up as the most thrilling Tour in recent memory. One way or the other, France may still be on course for its first winner since Bernard Hinault in 1985.

Furious racing on Stage 15 from Limoux to Foix on Sunday saw French rider Thibaut Pinot profit from the first signs of weakness in the high mountains from French race leader Julian Alaphilippe.

Pinot edged closer to the yellow jersey in the overall standings with a display of climbing power on the last uphill finish in the Pyrenees, signaling that he’ll be a major contender to win the Tour in what promises to be a climactic final week in the Alps.

British rider Simon Yates won the stage, his second at this Tour. Pinot was second, more than a minute faster than Alaphilippe, who ground on grimacing to place 11th at the top, still in yellow but with a smaller cushion over his rivals for the race lead.

CULTURE SLICE: The 185-kilometer (115-mile) trek swept past a ruined fortress perched on a rock overlooking the village of Montsegur where more than 230 people were burned at the stake in the 13th century after their surrender in 1244 following a nearly year-long siege.

QUOTE OF THE DAY: “If I crack I hope he’ll carry the torch for the French” — Alaphilippe, expressing hopes that Pinot will win if he himself can’t.

STAT OF THE DAY: 1:32. The amount of time in minutes and seconds that Pinot has clawed back from Alaphilippe in two days, on Stages 14 and 15. From seventh, he has vaulted to fourth.

NEXT ON THE MENU: The Tour is exquisitely poised entering its last rest day Monday before attacking the Alps, with four riders — Alaphilippe, defending champion Geraint Thomas, Dutch rider Steven Kruijswijk and Pinot — all within two minutes at the top of the standings.