NEW YORK (AP) — At a time when anti-Semitic incidents are on the rise worldwide, schools should take steps to teach empathy as an antidote to racism and religious hatred, several rabbis attending an international conference said.

The religious leaders praised a pilot project in El Paso, Texas, that requires students to pause each day to consider others. Children are given a small box shaped like Noah’s Ark. They collect money in it daily and give it to charities chosen by their classes.

“If you want to change the trajectory of the way things are going, you have to nip hatred in the bud,” Rabbi Levi Greenberg said at the International Conference of Chabad-Lubavitch Emissaries, a branch of Hasidism. The annual event ended Monday.

Greenberg, who lives in El Paso, approached the El Paso Community Foundation in 2018 with an idea after seeing a similar program initiated by colleagues in South Africa. The theory is that daily giving connects the students emotionally to others outside their normal environment. They become more compassionate and empathetic to other cultures and circumstances, Greenberg said. 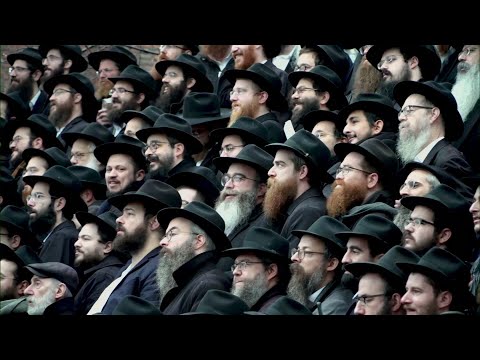 Anti-Semitism was on the minds of many of the attendees at an international gathering of Chabad-Lubavitch rabbis and lay leaders in town for the annual men’s meeting, but several said discussions must include solutions. (AP Video/Jessie Wardarski and Emily Leshner)

“Lectures are important, but action is transformative,” and the repetition of the daily giving brings subtle changes. “It’s like muscle memory,” Greenberg said.

So far, the boxes have gone to 1,500 students of all ages, but plans are to reach “tens of thousands more,” Greenberg said.

The program started in two schools and took on added poignancy in August after a gunman walked into a Walmart in El Paso, killing 22 people. Police say the assailant targeted Mexicans.

Another school was added to the pilot when fall classes began.

Greenberg said his best anecdote came from a principal who talked about a 15-year-old, upper-middle-class student who ignored the destitute people who often waited with him each morning to cross the border to El Paso from Ciudad Juarez, Mexico. That has changed. Collecting the money daily raised his awareness about the lives of the poor in his community.

“He started to have empathy. That is very powerful feedback,” the rabbi said. “It all happened because he was giving every day. He wasn’t listening to lectures or speeches or anything like that.”

Similar pilot programs are underway in several communities, including Lawrence, Kansas. Greenberg and others were approached by hundreds of attendees seeking to import the program locally.

The El Paso program is an extension of the philosophy of the movement’s late leader, Rabbi Menachem Mendel Schneerson, known as the Lubavitcher Rebbe, who was one of the most influential global leaders in Judaism in modern times.

“The Rebbe always taught that action is the most important thing,” Greenberg said.

Earlier this year, Israeli researchers reported that violent attacks against Jews spiked significantly in 2018, with the largest reported number of Jews killed in anti-Semitic acts in decades.

Capped by the deadly shooting that killed 11 worshippers at Pittsburgh’s Tree of Life synagogue on Oct. 27, 2018, assaults targeting Jews rose 13% that year, according to Tel Aviv University researchers. They recorded nearly 400 cases worldwide, with more than a quarter of the major violent cases taking place in the United States.

Rabbi Yitzchok Loewenthal, of Copenhagen, Denmark, said some “Jewish or Jewish friendly” people in his community were targeted recently with anti-Semitic yellow stars painted on their post boxes, and dozens of graves were desecrated.

Security in Copenhagen was already heightened because of a 2015 attack in which a gunman opened fire outside of a bat mitzvah celebration, killing a Jewish security guard.

While anti-Semitic acts must be confronted, and security considered, “that must not be the focus. The focus should be a positive,” Loewenthal said.

He has invited others outside Judaism to his community center and synagogue, where attendees socialize and learn more about Chabad. The efforts include adults, but the program is focused on the youth and schools and has the support of the local government to encourage interaction.

“It is across all borders,” including Christians and Muslims, Lowenthal said.