WARSAW, Poland (AP) — The Trump administration lashed out at some of America’s closest traditional allies Thursday, accusing Britain, France and Germany of trying to bust U.S. sanctions against Iran and calling on European nations to join the United States in withdrawing from the Iranian nuclear deal.

In an unusually blunt speech to a Middle East conference in Poland, U.S. Vice President Mike Pence slammed the three countries and the European Union as a whole for remaining parties to the landmark 2015 agreement after President Donald Trump withdrew from it last year and re-imposed tough sanctions on Iran.

The harsh criticism threatened to further chill U.S.-European ties that are already badly strained on many issues, including trade and defense spending. And it underscored the stark two-year trans-Atlantic divide over Iran that manifested itself again ahead of the Warsaw conference co-hosted by the U.S. and Poland.

France and Germany declined to send their top diplomats to the ministerial-level meeting. EU foreign policy chief Federica Mogherini also stayed away due to concerns it would become an anti-Iran vehicle. Britain, France and Germany, along with the rest of the EU, continue to support the nuclear deal as the best way to prevent Iran from developing atomic weapons. 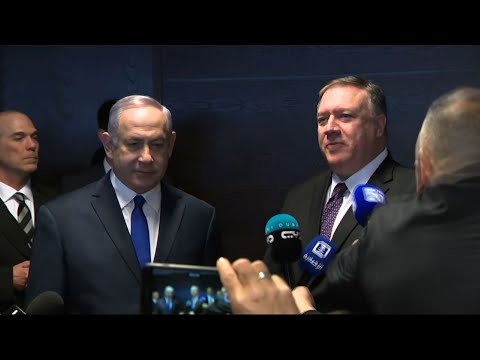 At the close of the conference, Secretary of State Mike Pompeo and his Polish counterpart Jacek Czaputowicz both noted differences of opinion over policies toward Iran. But, they said all participants agreed on the threat posed by the country, which is celebrating the 40th anniversary of the Islamic Revolution this week.

“There was not a defender of Iran in the room,” Pompeo said, adding that the U.S. and Europe were still capable of working together on the issue.

In his earlier speech, Pence showed just how sharp that difference is.

He was harshly critical of Britain, France and Germany for unveiling a new financial mechanism last month that U.S. officials believe is intended to keep the nuclear deal alive by evading American sanctions. Pence praised other nations for complying with U.S. sanctions by reducing Iranian oil imports, but he said the Europeans fell short.

“Sadly, some of our leading European partners have not been nearly as cooperative,” Pence said. “In fact, they have led the effort to create mechanisms to break up our sanctions.”

He said the mechanism, a barter-type payment system that is designed to allow businesses to skirt direct financial transactions with Iran, is “an effort to break American sanctions against Iran’s murderous regime.”

“It’s an ill-advised step that that will only strengthen Iran, weaken the EU, and create still more distance between Europe and the United States,” the vice president said.

Pence then called for Europe to abandon the nuclear agreement altogether, making explicit a demand that Trump administration officials had previously only hinted at.

“The time has come for our European partners to withdraw from the Iran nuclear deal and join with us as we bring the economic and diplomatic pressure necessary to give the Iranian people, the region and the world the peace security and freedom they deserve,” he said.

Niels Annen, a German deputy foreign minister who participated in the conference, told reporters after Pence spoke that Europe has a common position on the need to preserve the nuclear deal, and he dismissed U.S. concerns about the new financial mechanism. He said Germany believes both pressure and nuclear deal need to be maintained.

“We believe we need both,” he said. “We need pressure on Iran ... but we also need cooperation on the basis of this international agreement and we will continue to pursue this together.”

Germany, Britain and France have vigorously defended the new payment system as necessary to preserve the Iran accord, under which Tehran was granted billions of dollars in sanctions relief in exchange for curbs on its nuclear program.

They are also highly unlikely to withdraw from the agreement, a signature foreign policy achievement of the Obama administration. Their governments have repeatedly expressed support for it since Trump declared the U.S. would pull out.

The U.N.’s atomic watchdog and Trump’s own intelligence chiefs have said Iran remains in compliance with the agreement despite the U.S. withdrawal.

Pence, however, said Iran’s adherence to the deal’s terms is irrelevant. He said the accord was fatally flawed to begin with as it does not prevent Iran from obtaining the technology or material to eventually develop a nuclear weapon over time.

“Compliance is not the issue; the deal is the issue,” he said, calling Iran the “single greatest threat” to security in the Middle East.

Iran was not invited to the Warsaw conference and called the event a “circus” aimed at “demonizing” the country.

Because of European reluctance to attend a conference focused only on Iran, Pompeo and other U.S. officials had sought to broaden the scope to include other Middle East topics. The schedule included sessions on the Israeli-Palestinian conflict, Syria, Yemen, cybercrime and terrorism.

“No one country will dominate the discussion today, nor will any one issue dominate our talks,” Pompeo said at the opening of the conference,

But Pence’s comments, as well as earlier remarks by Pompeo, made clear the meeting was largely focused on isolating Iran.

Before the event opened, Pompeo met with Israeli Prime Minister Benjamin Netanyahu and said, “You can’t achieve peace and stability in the Middle East without confronting Iran. It’s just not possible.”

Netanyahu’s office released a video from a closed session of the conference in which Bahrain Foreign Minister Khalid Al Khalifa tells an audience that he grew up believing the Israeli-Palestinian dispute is “the most important issue” in the region.

But later, he said, “we saw a more toxic one, in fact the most toxic in our modern history, which came from the Islamic Republic, from Iran.”

Pence opened his keynote address by lauding the Trump administration’s commitment to fighting “radical Islamic terrorism,” a term he used in some form at least seven times.

He hailed gains made against the Islamic State group in Iraq and Syria, where the extremists are being ousted from their last remaining areas of control. Despite Trump’s abrupt decision to withdraw American troops from Syria, Pence said the U.S. would remain in the region to ensure the militant organization does not return.

“We will continue to hunt down the remnants of ISIS wherever and whenever they rear their ugly head,” he said.

No matter what the conference yields on Syria, the future of the country was more likely to be determined at a Thursday meeting between Russian President Vladimir Putin and the presidents of Iran and Turkey

The three leaders were in the Russian Black Sea resort of Sochi to discuss a Syria peace settlement as expectations mount for an imminent and final defeat of IS ahead of the U.S. pullout.