LAS VEGAS (AP) — Mary Wilson, one of the original members of the Supremes, the 1960s group that helped define the Motown sound and style and propelled Diana Ross to superstardom, has died. She was 76.

Wilson died Monday night at her home in Nevada and the cause was not immediately clear, said publicist Jay Schwartz.

“I just woke up to this news,” Ross tweeted on Tuesday, offering her condolences to Wilson’s family. “I am reminded that each day is a gift,” she added, writing “I have so many wonderful memories of our time together.”

Like many Motown artists, Wilson, Ross and Florence Ballard had grown up in Detroit and were still in their teens when they were signed in 1961 by Berry Gordy to his young record company. Within three years, the Supremes had their first No. 1 hit, “Where Did Our Love Go?” By the end of the decade, they were Motown’s greatest commercial success and embodiment of the label’s polished pop-soul music and elegant appearance, with their beehive hairdos and heavy eye makeup, in sequin gowns or in slacks and strapless tops.

Working mostly with the songwriting-producing team of Holland-Dozier-Holland, the Supremes had 12 No. 1 hits, including such classics as “Baby Love,” “Come See About Me,” “Stop! In the Name of Love” and “Back in My Arms Again.” Gordy was so invested in them that when “Nothing But Heartaches” failed to top the charts in the mid-1960s, Gordy wrote a company memo insisting that only No. 1 songs were acceptable for the Supremes. Balance was restored by their next release, “I Hear a Symphony.” 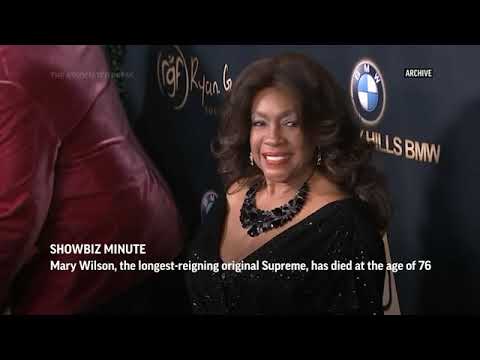 The Supremes gave listeners some of the most joyous sounds of the ’60s, but their personal story was bittersweet. As loosely mirrored by the Broadway musical “Dreamgirls,” Ballard would become resentful of Ross’ growing prominence and was replaced in 1967 by Cindy Birdsong after missing performances and recording sessions and struggling with alcoholism. (Ballard died in 1976).

Around the time Ballard left, Gordy renamed the group Diana Ross and the Supremes, a lineup which held until 1970 when Ross departed for a solo career and was replaced by Jean Tyrell. Once again called the Supremes, they had a top 10 hit in 1970 with “Stoned Love,” but faded after that and broke up in 1977.

Gordy issued a statement Monday night saying he was was “extremely shocked and saddened to hear of the passing of a major member of the Motown family, Mary Wilson of the Supremes.” According to Variety, Gordy said “The Supremes were always known as the ‘sweethearts of Motown.’”

Wilson, Ross and Ballard were inducted into the Rock and Roll Hall of Fame in 1988. Ross, Wilson and Birdsong attempted a reunion tour in 2000, but Wilson and Birdsong dropped out before it started after reportedly disagreeing with organizers over how much they would be paid and whether they would have creative input. Ross toured instead with Lynda Laurence and Scherrie Payne.

Following the Supremes’ disbandment, Wilson released the solo albums “Mary Wilson” and “Walk the Line” and wrote a handful of books, including the best-selling “Dreamgirl: My Life as a Supreme” and “Supreme Faith: Someday We’ll Be Together.” Her last book, “Supreme Glamour,” was written with Mark Bego and was released in 2019, when she also competed on ABC’s “Dancing with the Stars” in 2019.

A native of Greenville, Mississippi, Wilson had lived in St. Louis and Chicago before settling in Detroit and befriending Ballard when both were in middle school. Their rise to Motown seems inevitable now: Other childhood friends included several future members of the Temptations and Smokey Robinson, who helped them arrange a meeting with Gordy. His conditions for signing them included changing their name from the Primettes; Ballard is credited with suggesting the Supremes.

Wilson, in a recent YouTube video posted Saturday, said she was excited to celebrate Black history month, her upcoming birthday (March 6) and teased fans with the announcement that Universal Music had plans to release some of her music. Several celebrities mourned Wilson’s death on social media, including Viola Davis, Questlove and Kiss’ Paul Stanley, who said he was in touch with Wilson last week.

“Hopefully some of that will be out on my birthday,” she continued. “We’ll see. I’ve got my fingers crossed here. Yes I do.”