As violence soars, time runs out for Afghan interpreters

CHARLOTTE, NC (AP) — In a quiet cul-de-sac of this major North Carolina city, two boys kicked a soccer ball as their father tended to the tiny scraped knee of a third. “You’re strong,” Zia “Booyah” Ghafoori said, scooping up his youngest son.

A U.S. flag fluttered gently from a pole attached to their modest two-story home, the epicenter of the Afghan family’s new life in America.

Ghafoori, 36, came to the United States with his pregnant wife and three small children in 2014 on a Special Immigrant Visa. The visa is Ghafoori’s reward for his 14 years as an interpreter for U.S. Special Forces or, as Ghafoori calls them, “his brothers.” His nickname, Booyah, came from them.

While earning the admiration and respect of the U.S. military, Ghafoori’s work made him a traitor in the eyes of some of his fellow countrymen. He came to the United States to escape possible retribution from the Taliban, the extremist Islamic group that has steadily regained power in the country since being ousted by the U.S. after the Sept. 11 attacks.

Hostility toward the United States has spiked in neighboring Iran and in Iraq in recent days after President Donald Trump ordered an airstrike that killed a top Iranian military leader in Baghdad. 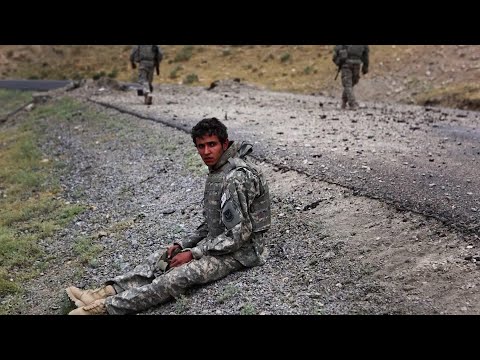 Ghafoori was just a teenager when he signed on as an interpreter for the prestigious Green Berets. He was awarded a Purple Heart for wounds suffered during the Battle of Shok Valley, a six-hour firefight in 2008. Ghafoori recently passed his citizenship test and is going to be among those sworn in as newly minted Americans later this week.

Grateful for his good fortune, he decided last year to launch the Interpreting Freedom Foundation, a nonprofit organization aimed at helping interpreters navigate the Special Immigrant Visa process and settle in the United States.

When he is not caring for his family of six or working late-night shifts at a convenience store, Ghafoori devotes his time to the foundation, answering calls from Afghans awaiting their visa approval. He’s also traveled to Washington, D.C., on his own dime to meet w ith lawmakers who may be able to help.

According to the State Department, nearly 13,000 Special Immigrant Visas have been granted to Afghan nationals since 2014.

Last February, the Consolidated Appropriations Act for Fiscal Year 2019 made 4,000 more available, while an additional 4,000 became available through a $738 billion defense policy bill passed last month. That’s hopeful news for the 19,000 Afghans still waiting for the State Department to decide their fate.

One of those is “Ahmad,” who served as an interpreter alongside U.S. troops in Afghanistan for nearly a decade. The Associated Press is concealing his real name for safety reasons.

“I put my life at risk and also my family’s life in order to help the people of Afghanistan ... as well as the U.S. armed forces, because they came from too far away to help us,” Ahmad said in an interview from Afghanistan’s capital city of Kabul.

“(Ahmad) is one of the most loyal and courageous men I have ever met in my life,” Smyth wrote in a letter that the former interpreter included with his application for a special visa in September. T hat same month, a federal judge ruled that the Trump administration broke the law by not promptly resolving visa applications.

“I have never seen an Interpreter charge towards the sound of guns like (Ahmad) did on numerous occasions with my team ,” Smyth wrote.

Ahmad has received no response from the U.S. government to his application. As he waits, life in Afghanistan is getting potentially more dangerous. E ighteen years after the collapse of the Taliban, the extremist movement controls or holds sway over half of the country of 36 million and, along with the Islamic State group, stages near-daily attacks.

As Trump’s calls for a full U.S. withdrawal from Afghanistan grow louder and the Taliban pledge more attacks, Ghafoori and Smyth worry time is slipping away for former interpreters like Ahmad.

“I don’t think it will be long before the Taliban takes over Afghanistan again,” Smyth says. “If that happens, these guys are all targets.”

Ghafoori and his growing family were sent to a homeless shelter in Virginia when they first arrived in the United States in 2014. When the former Green Beret captain who hired him heard of his plight, he took them in. Eventually, Ghafoori secured a job in construction and bought a home of his own. But he never forgot his fellow interpreters still in Afghanistan.

“I don’t want somebody else faced with those problems that I have been faced (with),” he said.

Smyth says the United States owes a debt to the interpreters who put their lives on the line for American military forces.

“They just want the chance to be Americans, too,” he said. “And they’ll be amazing Americans.”