NEW YORK (AP) — Janelle Monae brought down the house Saturday at Ralph Lauren’s New York Fashion Week show, where “the house” was a jazzy nightclub of yesteryear that Lauren created inside a Wall Street building to debut his fall collection.

The singer hopped on a table and danced to the ground as she performed before the huge roomful of guests instructed to wear black-and-white evening attire — although actor Henry Golding missed that memo, showing up in a stunning blue velvet tuxedo instead.

Sisters Bella and Gigi Hadid were among the models who navigated a grand staircase of the art deco club inspired by the glamorous see-and-be-seen New York of the 1920s and ’30s as they showed off Lauren’s sparkly dresses and tuxedo-inspired evening looks.

They walked amid the small, white-clothed tables that seated guests, including actress Cate Blanchett dressed in a sleek black jumpsuit.

Bella wore a slinky red gown while Gigi walked in a silver jacket tuxedo look. When Monae took the stage, accompanied by a jazz orchestra, the models left posed positions at the bar to clap, whoop and dance the night away. 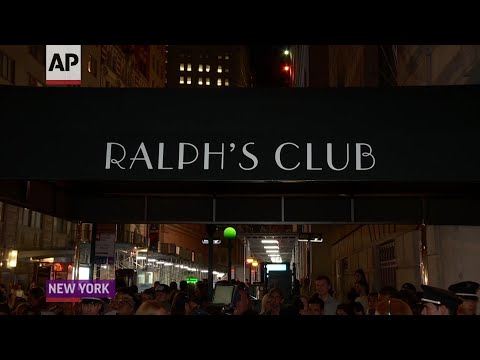 “This is insane,” he told The Associated Press as he grabbed a drink at the bar. “I mean, this is one of my favorite things to do, just sit in a jazz club. And look at this beautiful art deco room. It’s phenomenal.”

Ralph’s Club continues Lauren’s penchant of late for immersing his fashion week crowds rather than marching models down a runway. In the past, he has enticed his guests to his rural home north of the city for a jaunt in his garage. Ralph’s Club follows Ralph’s Cafe.

“It just was the right time,” Lauren told the AP after the show as the evening wound down. “We’re celebrating. There are a lot of things in the world that are not so wonderful. Every once in awhile, it’s nice to dance.”