Michigan Rep. Slotkin says she will vote to impeach Trump

Slotkin, who first announced her decision in an op-ed in the Detroit Free Press, explained it further hours later inside a packed room at Oakland University in suburban Detroit. Many in the crowd of more than 400 people stood and cheered her multiple times, while a smaller group of anti-impeachment protesters heckled her and yelled “MAGA” and “four more years” for Trump.

“To me, this was an issue of principle,” said Slotkin, who worked in U.S. intelligence, national security and defense during the Obama and Bush administrations. She said she made her decision “out of a duty to protect and defend the Constitution. I feel that in my bones, and I will stick to that regardless of what it does to me politically.”

Slotkin represents Michigan’s 8th Congressional District. It stretches from the capital of Lansing to the Detroit suburbs, and backed Trump over Hillary Clinton in his 2016 election but elected Slotkin in 2018 over a Republican incumbent.

Trump faces two articles of impeachment by House Democrats: abuse of power and obstruction of Congress. They point to Trump pressuring Ukraine to investigate 2020 political rival Joe Biden while withholding as leverage military aid the country relies on to counter Russia as well as his efforts to block the House investigation. 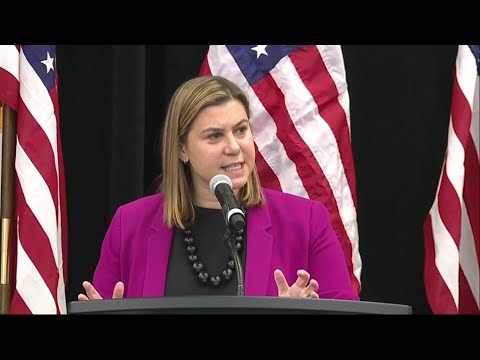 Slotkin said she came to her decision “very reluctantly” after having initially opposed impeachment until joining six other freshman Democrats with experience in national security to call for an inquiry in September.

“The thing that was different for me is this very, very basic idea that the president of the United States would reach out to a foreign power and ask for an investigation for personal political gain,” she said. “That is very different from how presidents typically wield their power.”

The House will vote Wednesday on the impeachment articles approved last week by the House Judiciary panel. The vote is all but certain to result in Trump’s impeachment, though he is expected to be acquitted in a Senate trial.

Srijid Sengupta, a 38-year-old from Troy, Michigan, who works in finance for an auto company, protested her decision and said after that he was disappointed she took no direct questions from the crowd. Slotkin instead had an aide respond to some impeachment-related questions her office had received.

“At the end of the day, a year away from elections, why not let the voters decide whichever way they want to go?” said Sengupta, who voted for Trump. He likened the process to a “kangaroo court.”

Stephanie Droz, a 49-year-old auto manufacturing technician who votes Democratic, said she originally opposed impeachment since the election is less than a year away. But, pointing to Trump and his lawyer Rudy Giuliani’s own statements about Ukraine, she said it was right to investigate.

“In the very least, not so much removing him from office, I hope we do establish more clarity” on how the executive branch should be working, Droz said, adding that some of her co-workers in the United Auto Workers union do not oppose impeachment despite having voted for Trump. “Part of the impeachment, which everyone seems to forget, it doesn’t automatically mean a removal from office. All it is is a charge. He very well could just end up finishing out his term, running in 2020 and winning again.”