LITTLE ROCK, Ark. (AP) — Teachers picketed outside the site of a historic desegregation and dozens of other Little Rock schools Thursday, walking out for the first time in more than three decades to protest the state’s control of the local school system and their loss of collective bargaining rights.

The one-day strike in the 23,000-student district was the first in Little Rock since 1987 and followed the state Board of Education’s decision last month to strip the local teachers union of its bargaining power. The union’s president said Thursday night the strike would not extend into Friday after initially leaving open that possibility.

“We know this is the first battle in a longer fight,” Little Rock Education Association President Teresa Knapp Gordon told reporters as teachers, students and parents waved signs and chanted outside Little Rock Central High School, which was desegregated by nine black students in 1957.

The union has called for the return of its bargaining power, but Thursday’s strike was focused more broadly on control of the schools. Arkansas took control of the district in 2015 because of low test scores at several schools. The Board of Education has voted to return the district to a local school board that will be elected in November 2020, but with the state maintaining some authority. 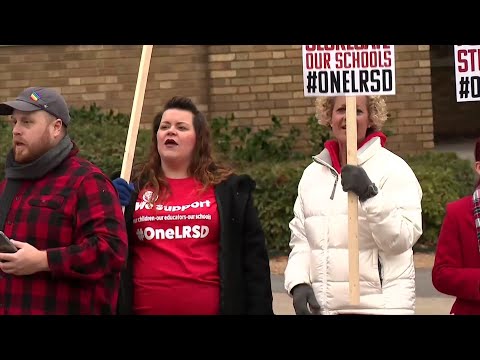 “In the (school) buildings, we can protect our kids, but if we don’t have protections for ourselves it’s very difficult to protect our kids from the way the state has been attempting to destroy our public schools here,” said Chris Dorer, a Central High School history teacher who was picketing outside.

More than 600 of the district’s roughly 1,800 teachers were absent Thursday, spokeswoman Pamela Smith said. Prior to the strike, the district had lined up hundreds of substitute teachers, along with hundreds of district and state education employees who could be redeployed to classrooms.

“While some are not in the classroom today, we are continuing education in a safe environment for our students and teachers,” Gov. Asa Hutchinson, a Republican who appointed eight of the state board’s nine members, said in a statement. “It is the constitutional responsibility of the state to ensure an equal and quality education to all of our students. That is what we all want and what we are working to achieve with the LRSD.”

State Education Secretary Johnny Key urged teachers to remain on the job and said a strike “does not promote learning.”

“Students learn best when qualified, highly effective teachers are present in the classroom and promote a safe and exciting learning environment,” Key said in a statement released Wednesday night.

The strike follows weeks of demonstrations over the state’s control of the district. Democratic presidential hopefuls Bernie Sanders and Elizabeth Warren have tweeted their support for the striking teachers. Teachers also rallied outside the state Board of Education and on the steps of the state Capitol.

Striking teachers have invoked the Central High crisis in their protest of state control of the predominantly black district, and some have dubbed Hutchinson “Asa Faubus,” referencing Gov. Orval Faubus, who blocked the school’s integration in 1957.

“I remember 1957, when this school was segregated. We do not want our schools resegregated,” Deborah Keene, the grandmother of a middle school student, said as she picketed with teachers. “That’s what this is all about.”

Hutchinson noted that the board backed off an initial plan to divide up control of the district and called the resegregation claims “absolutely false and ... simply designed to arouse passions to support the union strike.”

Before its contract expired, the Little Rock Education Association was the only teachers union in Arkansas with collective bargaining power. Those in support of ending the union’s recognition have said more teachers would be represented if the district sets up a personnel policies committee made up of teachers who could offer advice on salaries and other issues.

The only other teachers strike in the district was in 1987, when Little Rock students missed six days of school before a new two-year contract was approved.

Thursday’s strike follows similar actions elsewhere. A strike in Chicago, the nation’s third-largest school district, canceled 11 days of classes for more than 300,000 students before a contract deal was reached on Oct. 31. And teachers in several states, including Oklahoma, West Virginia and Kentucky, protested last year at state capitols over wages and other issues.