But the teeming Cannes Film Festival, where “The Dead Don’t Die” premiered Tuesday as the opening-night film, has hordes and horrors of its own. When asked what horror films he finds frightening, its lead star, Bill Murray, didn’t hesitate.

“I find Cannes frightening,” said Murray on Wednesday. When it was suggested that, at least, there hadn’t been any zombies on the Croisette, the festival’s main drag, so far, Murray replied, “Says you.”

“The Dead Don’t Die” did, in fact, bring zombies to Cannes. Staggering actors in full zombie makeup lined the entryway to the film’s after-party late Tuesday night shortly after Jarmusch’s latest — his ninth film in competition at Cannes — made its anticipated debut.

The film, which Focus Features will release in U.S. theaters on June 14, is Jarmusch’s George Romero-inspired take on the genre, both playfully postmodern (some characters are aware they’re in a movie) and pointedly political.

Murray plays the sheriff of a small town named Centerville where Adam Driver and Chloe Sevigny also play police officers. When the planet stops rotating, night never comes and the dead begin roaming Centerville’s streets while still clinging to their old habits (seeking Wi-Fi, chardonnay and coffee). Townspeople include Tilda Swinton as a funeral parlor director, Tom Waits as a local hermit and Steve Buscemi as a farmer with a MAGA-like hat reading “Keep America White Again” and a dog named Rumsfeld. 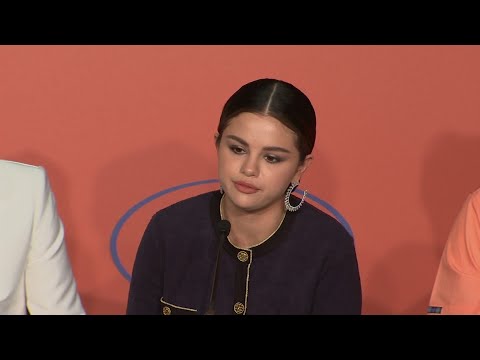 “Defining this as a political issue is very confusing and perplexing to me. It’s not about politics. So politics is essentially not of interest to me,” said Jarmusch. “I don’t understand how it can even be considered as such. Politics doesn’t seem to save anything. Politics is a kind of distraction. And now the politics is controlled on the planet by its corporate politics so this for me is the problem.”

Critics responded to “The Dead Don’t Die” with mixed reviews. Variety called it “a disappointing trifle.” The Los Angeles Times said it’s a “bleak, bone-dry shrug of a horror-comedy.”

But it did bring one of the starriest premieres set to hit Cannes this year, including co-star Selena Gomez, who plays a teenager visiting Centerville. Jarmusch was drawn to her by her performance in Harmony Korine’s 2013 “Spring Breakers.” Jarmusch spoke highly of the 26-year-old pop star on Wednesday, calling her “incredibly admirable” for “encouraging young people to have their own will.”

While the ills of social media play only a minor role in “The Dead Don’t Die,” Gomez went further on Wednesday, saying Instagram, where she has more than 150 million followers, is “pretty impossible” to make safe at this point.

“I would say for my generation specifically social media has really been terrible,” Gomez said. “It does scare me when you see how exposed these young boys and young girls are. They are not aware of the news. I think it’s dangerous for sure. I don’t think people are getting the right information sometimes.”

“The Dead Don’t Die” is aimed squarely at satirizing crass materialism along with inaction and disinformation in the face of climate change. But Jarmusch said his film was already being interpreted beyond his intentions.

“The zombies as metaphor is so laden,” said Jarmusch. “Some of the things I read this morning about our film were things that honestly hadn’t occurred to me. I think the metaphor is stronger than I was analyzing or aware of.”