GALVESTON, Texas (AP) — Houston, a Gulf Coast city that barely rises above sea level, has long worried about a worst-case weather scenario — a direct hit from a powerful storm that sends a wall of water barreling into the region’s petrochemical facilities, possibly triggering an environmental disaster.

When it was spared a blow from Hurricane Laura last month, the city breathed a sigh of relief. Now the close call has renewed a debate about whether the Houston area should build a massive and expensive barrier to protect against storm surge.

“I don’t know how many chances we are going to have ... Whatever it may be that can mitigate storm surge, then that’s what I am in favor of,” Turner said. “What I do know is we can’t keep just talking about it.”

In addition to a lack of storm surge protection, the nation’s fourth-largest city floods frequently because it does not have enough infrastructure to handle heavy rain. The area has developed rapidly in a way that sharply reduced the natural wetlands that could soak up storm water runoff. Its Depression-era drainage systems are woefully inadequate. 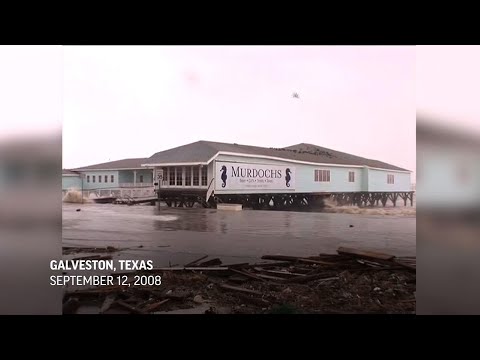 Bill Merrell, a marine sciences professor at Texas A&M University at Galveston who first proposed the coastal barrier, believes storm surge is a grave threat that has been ignored for too long.

“We’re overdue for a Laura ... We’re starting to see pretty convincing evidence we will have stronger hurricanes” due to climate change, said Merrell, who nicknamed the proposed barrier the “Ike Dike,” after 2008′s Hurricane Ike.

Merrell spoke earlier this month in Galveston, near the inlet between the Gulf of Mexico and Galveston Bay. That’s where he envisions building the Ike Dike’s floodgates, which would stop storm surge from entering the bay and traveling north into the Houston Ship Channel, home to some of the largest oil refineries in the world and 40 percent of the nation’s petrochemical industry.

Researchers at Rice University in Houston have estimated that a strong Category 4 storm with a 25-foot storm surge could damage storage tanks along the ship channel, resulting in the release of more than 90 million gallons of oil and hazardous substances into neighborhoods and then into the bay.

The barrier system, also referred to locally as the coastal spine, has been studied since Merrell first proposed it after Ike, which made landfall in Galveston as a Category 2 storm and resulted in nearly $30 billion in damage, mostly from storm surge. Because the storm and its surge did not come up the ship channel, most of the chemical plants and many homes were spared from a direct hit. Ike was also much weaker than a potentially catastrophic Category 4 or 5 system.

But a variety of concerns about the dike, including a price tag of up to $32 billion and possible environmental effects, have been roadblocks in its construction.

The U.S. Army Corps of Engineers and the state are reviewing a proposed project that borrows from the Ike Dike. It would build floodgates, including some sets that would be 650 feet wide, the equivalent of a 60-story building laid on its side.

The coastal barrier would create “additional protections and added security for our nation’s largest petrochemical hub, and for the people who live and work in these communities,” said Dennis Winkler, executive director of East Harris County Manufacturers Association, an alliance of chemical manufacturers in the Houston area.

Another draft report of the project is to be released in October, with a final report set to be given to Congress by May. If the project gets funded, construction could start as early as 2025. It would take 10 to 15 years to complete, Burks-Copes said. The project would have to be funded by both federal and local dollars.

Rice University’s Severe Storm Prediction, Education and Evacuation from Disasters Center, or SSPEED, has proposed its own project — a series of man-made islands near the western section of Galveston Bay and the entrance to the ship channel that would be both a storm surge barrier and a park with trails and camping. The Galveston Bay Park, with a price tag of up to $6 billion, could be done by 2030.

But questions remain about both projects.

Environmental groups are concerned that the Army Corps project’s floodgates could affect water flow between the bay and the Gulf of Mexico. Galveston Bay is healthy, and fish and other animals thrive there because water circulates in and out of the gulf, said Bob Stokes, president of the Galveston Bay Foundation environmental group.

Burks-Copes said the Corps has made changes to address environmental and other concerns.

Neither project would have protected the area from Hurricane Harvey, which dumped more than 50 inches (127 centimeters) of rain on Houston in 2017, causing $125 billion in damage in Texas.

Harris County, which includes Houston, is also completing several other flood-mitigation projects, including widening bayous, improving drainage and buying flood-prone homes, that are part of a $2.5 billion bond program approved by voters in 2018 after Harvey.

Stokes was realistic about the prospects for shielding the city from nature.