The Associated Press has not declared a winner in Georgia because the race between President Donald Trump and Biden is still too early to call. Trump had a narrow lead, but with thousands of ballots still being tallied in counties that tend to vote blue, Democrats had reason for optimism.

During a news conference in the state Capitol, Sterling did not offer an estimate for when he expected counties to finish tabulating their results. He said officials are working diligently and he emphasized his confidence in the legitimacy of the process.

“I think if anybody was going to try to rig a system they might have seen something a little less close than this,” Sterling said. “In this state in particular we take security very seriously. ... We’re going to have a recount for president more than likely and the people will see that the outcome will stay essentially the same.” 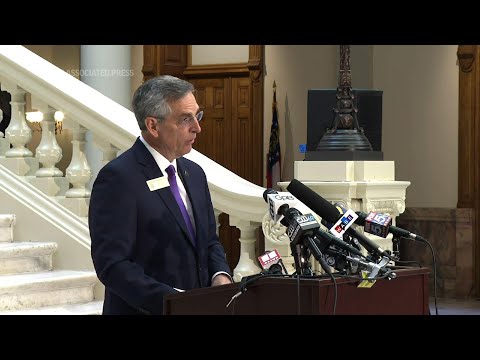 The roughly 16,000 outstanding absentee ballots don’t include provisional ballots and ballots that need to be “cured” before being scanned. Sterling also noted that ballots cast before Election Day by military voters and citizens living overseas and received by 5 p.m. Friday will be tallied.

A software problem that occurred on Election Day was delaying the counting of about 6,000 ballots in Gwinnett County outside of Atlanta, county spokesman Joe Sorenson said. The error is forcing officials to rescan roughly 80,000 ballots to identify ones where voters made errors in marking them by hand. An adjudication panel will then examine those ballots to try to determine voter intent over the next two to four days, Sorenson said. Once that’s done, the outstanding ballots – mostly absentee ballots received on Election Day – can be counted.

With margins so narrow in Georgia, Democrats, Republicans and voting advocacy groups are scrambling to encourage people to fix flaws in already submitted ballots before a Friday deadline to ensure they are counted. There are two categories of ballots where voters may need to fix or “cure” flaws.

One is in mail-in ballots, where voters may have forgotten to sign their ballot or elections workers may have decided that the signature doesn’t match.

The second category is provisional ballots, where voters encountered a problem in person at a polling place and cast their vote with the understanding that officials would later determine whether it’s eligible. Some will be counted without further action, but if a voter didn’t present a photo identification, they will have to present ID to officials to cure their ballot. Advocates also say that in some cases, voters may need to go to a county elections office if they didn’t show up on the rolls at a polling place to make sure their ballot is counted.

Cam Ashling, a Democratic activist, said she spent Thursday canvassing Gwinnett and Hall counties northeast of Atlanta door to door, although she said she found few voters. She said volunteers are flooding in on the Democratic side to seek out missing ballots.

“I guess they’re waking up to the reality that we can flip Georgia,” Ashling said.

State officials couldn’t immediately provide the number of uncured absentee ballots. Provisional lists are kept at the county level, and there are thousands outstanding statewide that county officials will decide on whether to count by Friday.

Donald Trump Jr. spoke Thursday evening at an event in Atlanta, along with several Georgia elected officials and decried the process.

Earlier in the day, roughly a hundred Trump supporters gathered outside the arena. They carried signs that read, “Foolton County=Fraud” and chanted “God bless Trump” and “Stop the steal.” Several Atlanta police officers monitored the scene.

On Thursday, Chatham County Judge James Bass dismissed a lawsuit by the Georgia Republican Party and the Trump campaign that essentially sought to ensure state laws are being followed on absentee ballots. The suit had raised concerns about 53 absentee ballots; county officials testified that all had been received on time.