LANSING, Mich. (AP) — Gov. Gretchen Whitmer on Tuesday announced the further loosening of Michigan’s coronavirus restrictions, easing capacity limits in restaurants and a host of other businesses while also allowing for larger indoor and outdoor gatherings.

The state also said families will immediately be able to visit nursing homes and other residential care facilities after being tested for COVID-19, unless the facility has had an infection within the previous 14 days. Visitations had been automatically prohibited in counties with high infection rates, but officials noted progress with vaccinations. All nursing home residents have been offered a first dose, and a vast majority have gotten both doses.

Retail stores will have a 50% capacity limit, up from 25%. Gyms’ capacity will be 30% instead of 25%. Venues such as movie theaters, bowling alleys and banquet halls will also be able to have more people — up to 300 patrons within any distinct space inside or 1,000 outside. 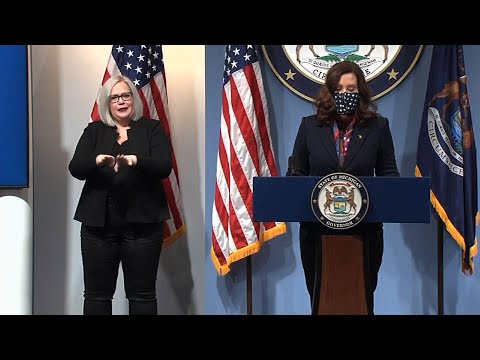 Capacity limits at indoor stadiums and arenas will rise to 375 or 750 depending on their size. A cap on indoor residential gatherings will be loosened slightly, to no more than 15 people from three households instead of 10 from two households.

“We’re doing this incrementally, but these are all the places where we can safely do more,” Whitmer said at a news conference. “The increased capacity limits outlined in this order will still give us the ability to protect public health as we carefully track variants and continue leading with science and data.”

Dr. Joneigh Khaldun, the state’s chief medical executive, said the case rate — 91 per million residents — is plateauing after having declined for six weeks. The positivity rate, 3.7%, is up slightly from last week and similar to what is was five months ago. The percentage of beds for virus patients is 3.9% after peaking at 19.6% on Dec. 4.

Despite the governor’s announcement, Republican lawmakers were critical. They have clashed with Whitmer over the scope of the limits compared to less stringent ones in surrounding states, the pace of reopening and a lack of legislative input.

Senate Majority Leader Mike Shirkey of Clarklake called the announcement “woefully inadequate, ensures we remain completely out of step regionally and nationally, and will drive more Michiganders out of their jobs and out of our state.” Sen. Rick Outman of Six Lakes accused the governor and other top officials of “tossing a few more crumbs” to residents.

AARP Michigan applauded the nursing home order, which tells facilities to make efforts to allow communal dining and group activities. The previous order said they should be limited.

“Social interaction with families and friends is critical to the overall health and well-being of long-term care residents. The stories of separation during this time have been heart-wrenching,” said AARP state director Paula Cunningham.