HOUSTON (AP) — A Houston police officer indicted for murder following a deadly 2019 drug raid in which a couple was killed is being targeted by a district attorney looking to score political points in the wake of last year’s nationwide protests against police brutality, his attorney alleged on Tuesday.

Officer Felipe Gallegos became the second officer who was indicted for murder following the January 2019 drug raid in which Dennis Tuttle, 59, and his wife, Rhogena Nicholas, 58, were killed.

Rusty Hardin, Gallegos’ attorney, said the officer was a “hero” who saved the lives of other officers who were being shot at by Tuttle and who had nothing to do with an alleged faulty search warrant that had wrongly led authorities to the couple’s home.

In a brief statement during a news conference, Gallegos told reporters he hasn’t “been awarded the opportunity to tell my side of the story, to be able to explain that I’m not the bad person that I’m being painted to be.”

Gallegos, who’s been with the police department for 12 years and whose father is a homicide detective with a suburban Houston police agency, did not comment on the shooting.

Prosecutors have alleged that another officer, Gerald Goines, lied to obtain the warrant to search the couple’s home by claiming that a confidential informant had bought heroin there. Goines later said there was no informant and that he had bought the drugs himself, they allege. 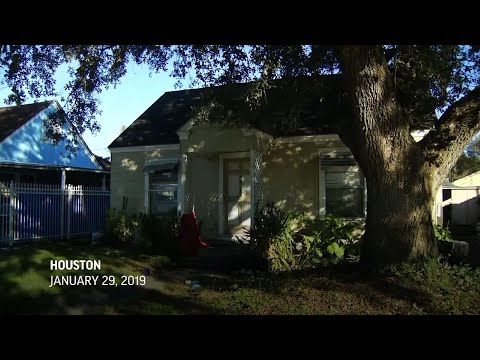 Five officers, including Goines, were injured in the raid, including four who were shot. Goines was indicted last year on two counts of felony murder in the deaths of the couple.

Gallegos was indicted on Monday in the killing of Tuttle. Hardin said that when Tuttle started firing at officers, he stopped being an innocent victim.

Friends of Tuttle and Nicholas say they were not criminals and have suggested that the couple might have thought they were being attacked by intruders. Michael Doyle, one of the Nicholas family attorneys, said in a statement that their ongoing independent investigation is questioning the police version of how the shooting took place.

The indictments of Gallegos, Goines and other officers is part of an ongoing investigation into the Houston Police Department narcotics unit behind the raid. In all, a dozen current and former officers tied to the unit have been indicted, with most for charges related to lying on search warrants, putting false information on offense reports and lying on time sheets as part of a scheme to get overtime.

An audit made public in July of the narcotics unit found that officers often weren’t thorough in their investigations and overpaid informants for the seizure of minuscule amounts of drugs.

Hardin said in the wake of last year’s death of George Floyd, who was pinned to the ground under a white Minneapolis officer’s knee before he died, efforts to right past wrongs over racial injustice should not be anti-police.

The union was paying the legal fees of all the indicted officers except for Goines.

In a statement, Ogg said a grand jury “determined that Officer Felipe Gallegos is not in fact a hero, but a murderer.”

In 2013, a truck driver accused Gallegos and another officer of punching and putting him in a chokehold while they searched for a burglary suspect. Hardin said Gallegos denied using excessive force and a complaint against the officer was not sustained by internal affairs. The truck driver later filed a lawsuit alleging injuries and the city of Houston settled it in 2018 for $200,000.