SAN ANTONIO (AP) — The Latest on the deaths of 10 people whose bodies were found in a broiling tractor-trailer in a Walmart parking lot in San Antonio (all times local):

A congressman says a truck that carried dozens of immigrants, 10 of whom died, passed through a Border Patrol checkpoint around two hours before it was discovered in the parking lot of a San Antonio Walmart.

U.S. Rep. Henry Cuellar told The Associated Press on Tuesday that he had been informed by law enforcement that the truck driven by James Matthew Bradley Jr. cleared the Interstate 35 checkpoint north of Laredo around 10 p.m. Saturday. Police arrived at the Walmart parking lot at 12:23 a.m. Sunday.

Cuellar said he didn’t know whether immigrants crossing into the United States illegally were loaded into the truck before or after it crossed the checkpoint.

The station is 29 miles north of the border, along the interstate that links Laredo and San Antonio and is a primary north-south route in the United States. The station is equipped with license plate readers and dogs that sniff vehicles heading north.

A Customs and Border Protection spokesman did not immediately respond to a message seeking comment.

An official with U.S. Immigration and Customs Enforcement says investigators examining the deaths of 10 people found inside a broiling, packed tractor-trailer in San Antonio consider the driver to be just one member of a large “organization” behind the human smuggling operation. 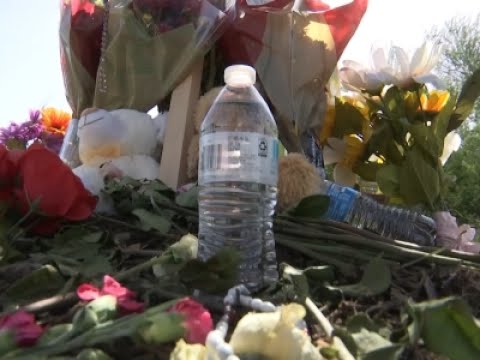 Shane Folden, special agent in charge of ICE’s Homeland Security Investigations office in San Antonio, told The Associated Press Tuesday that agents want to “dismantle the complete organization.” The immigrants were found Sunday inside a tractor-trailer at a Walmart in San Antonio.

Folden says that could include money transfers, stash houses for immigrants smuggled across the U.S.-Mexico border, and other people involved in planning the operation.

Agents have interviewed just five of the dozens of people on board the trailer. Twenty-two people are still hospitalized.

Federal regulators say they are investigating the troubled Iowa trucking company linked to the 10 deaths of immigrants found in one of its trailers in Texas.

The agency says its findings will be shared with Department of Homeland Security investigators, who are conducting a criminal investigation into the immigrants’ deaths.

Company owner Brian Pyle said Monday that he had no idea how dozens of immigrants became packed into a trailer with its name on it. He says the company had sold the trailer to an individual in Mexico, and an independent contractor was driving it to Brownsville, Texas, to carry out the sale.

The Schaller, Iowa-based company has a history of safety and financial problems.

A Guatemalan diplomat says one survivor of the immigrant smuggling operation that claimed 10 lives told her Houston was the group’s final destination.

That’s three hours from where the tractor-trailer stopped in a San Antonio Walmart parking lot.

The diplomat said the teen hoped ultimately to reach New York. Another hospitalized Guatemalan, a 23-year-old, was bound for California.

Cristy Andrino, Guatemala’s consul in McAllen, visited the 17-year-old Maya in the hospital. Andrino says the teen was in good spirits Tuesday and looking forward to reuniting with family.

She said he was happy to learn he wouldn’t be deported because of his age. He spoke by phone with his mother and was showered with gifts from well-wishers.

She says he other hospitalized Guatemalan is a material witness in the criminal case against the truck driver and may be able to apply for a special visa available to victims who cooperate with prosecutors.

The state of Florida had suspended commercial driving privileges for a truck driver three months before he was arrested for driving a tractor-trailer so hot and so crammed with immigrants that 10 people died.

Alexis Bakofsky, a spokeswoman for the Florida Department of Highway Safety and Motor Vehicles, confirmed Tuesday that the agency disqualified 60-year-old James Matthew Bradley Jr.’s commercial driving privileges in April when he failed to file an updated medical card. Federal law requires commercial drivers supply the card to show they are physically fit for the road.

Bradley’s driving record shows he was issued a commercial driver’s license in Florida in 2004. Bakofsky confirmed the Florida license was disqualified indefinitely. Bakofsky also says it would have been illegal for him to have held a second license from another state.

Bradley faces charges of illegally transporting immigrants for financial gain resulting in death. The immigrants were found inside his truck at a Walmart in San Antonio.

Court records show that a long-haul truck driver charged in the deaths of 10 immigrants found inside his sweltering tractor-trailer in San Antonio had been cited repeatedly for violating federal motor carrier safety regulations in Iowa dating back to 1995.

At least two of the tickets were for logging more hours than allowed.

James Matthew Bradley Jr.’s most recent infraction came in April 2013. He was ticketed for violating a rule that bars truckers from driving longer than 14 hours without a break. The citation shows that he was driving for Pyle Transportation. He was fined $127.50.

The records show Bradley also received tickets for violations of federal safety rules following stops or inspections in 2011, 2010 and 1995. They included a “maximum hours of service violation” for driving too much without rest in 2010.

A long-haul truck driver charged in the deaths of 10 immigrants found inside his sweltering tractor-trailer called his fiancee Sunday from a jail more than 1,000 miles from home and briefly described the gruesome events.

Darnisha Rose says James Matthew Bradley Jr., who she called a generous person, claimed he had no idea how so many people came to be crammed inside his trailer in the Texas heat.

The 60-year-old Bradley, a diabetic whose criminal history includes a conviction in a felony domestic violence case, told Rose that he’d stopped his truck at a San Antonio Walmart and went inside to use the bathroom. He claimed that when he returned to his truck, he noticed the trailer rocking back and forth.

He said he’d heard nothing before that.

Mexico’s foreign ministry says 25 of the migrants found inside a sweltering tractor-trailer found parked outside a Texas Walmart were Mexican.

In a statement Monday night, the ministry says that based on interviews by Mexican consulate personnel and contact with local authorities, “we can say that of the 10 people who lost their lives ... four were of Mexican nationality.”

The statement also says that of the 29 people hospitalized, 21 are Mexican.

Also Monday, the man charged with driving the rig appeared in federal court in San Antonio.

James Matthew Bradley Jr. faces charges of illegally transporting immigrants for financial gain, resulting in death. The judge explained to Bradley that he could face the death penalty, if convicted.

In the federal complaint, Bradley told authorities he didn’t realize anyone was inside the 18-wheeler.