WASHINGTON (AP) — Congressional leaders paid tribute Wednesday to slain U.S. Capitol Police Officer Brian Sicknick in the building he died defending, promising his family and his fellow officers that they will never forget his sacrifice.

Sicknick died after an insurrectionist mob stormed the U.S. Capitol on Jan. 6, interrupting the electoral count after then-President Donald Trump urged them to “fight like hell” to overturn his defeat. The U.S. Capitol Police said in a statement that Sicknick, who died the next day, was injured “while physically engaging with protesters,” though the cause of his death has not been determined.

House Speaker Nancy Pelosi said Sicknick was a patriot who will be remembered by lawmakers each day as they enter the Capitol. “We will never forget,” she promised his family, who attended the ceremony.

The 42-year-old officer was only the fifth person to lie in honor in the Capitol Rotunda, a designation for those who are not elected officials, judges or military leaders. President Joe Biden and Vice President Kamala Harris, along with their spouses, paid their respects during two days of visitation Tuesday and Wednesday, as did members of Congress and his fellow law enforcement officers. Both Biden, who visited Tuesday night, and Harris on Wednesday laid their hands on the urn in remembrance. 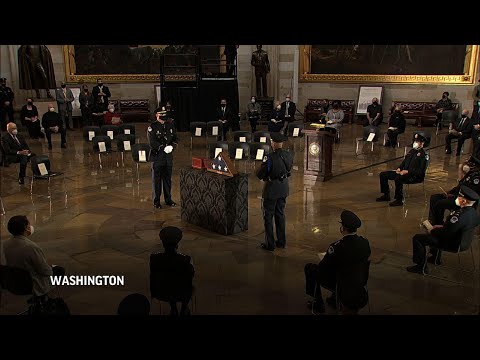 After the ceremony, Sicknick’s urn was taken out of the building as hundreds of his fellow officers lined the Capitol’s east front. They saluted his hearse as it departed for Arlington National Cemetery, where he will be interred.

The ceremony came a week before a Senate impeachment trial that will issue a verdict on Trump’s role in the riots, and as shaken members of Congress grapple with what the violence means for the future of the country and their own security. While lawmakers were largely united in denouncing the riots, and Trump’s role in them, the parties are now largely split on how to move forward. At the same time, the building has been cut off from the public, surrounded by large metal fences and defended by the National Guard.

Senate Majority Leader Chuck Schumer, speaking at the ceremony, talked of the deep scars left by the assault.

“Let us all be a comfort to those who continue to recover from injuries, seen and unseen, from the attack on Jan. 6,” Schumer said.

He said Sicknick was the “quiet rock” of his unit who was “caught at the wrong place at the wrong time, on a day when peace was shattered.”

Sicknick, of South River, New Jersey, enlisted in the National Guard six months after graduating high school in 1997, then deployed to Saudi Arabia and later Kyrgyzstan. He joined the Capitol Police in 2008. Like many of his fellow officers, he often worked security in the Capitol itself and was known to lawmakers, staff and others who passed through the building’s doors each morning.

The day was full of solemn ceremony and of reminders of the violence that occurred a month ago. Some of the evidence remains visible, including shattered windows and dented wood doors. Sicknick’s urn was carried through one of the entrances the rioters broke through, and groups of them paraded through the Rotunda where his ashes lay. The lawmakers who attended the ceremony — some of them wiping away tears — evacuated the House and Senate as the rioters closed in.

“Four weeks ago, the Rotunda was strewn with the debris of an insurrectionist mob,” Senate Republican leader Mitch McConnell said on the Senate floor Wednesday morning. “Today, it is adorned in solemn thanksgiving for the sacrifice of a hero.”

In addition to congressional leaders, guests at the ceremony included Defense Secretary Lloyd Austin, Army Gen. Mark Milley, chairman of the Joint Chiefs of Staff, and Washington Mayor Muriel Bowser. Also in attendance was Wenling Chestnut, widow of slain Capitol Police Officer Jacob Chestnut, one of two Capitol Police officers killed by a gunman in 1998. After viewing the urn, she walked to the side and sobbed quietly into a companion’s shoulder.

Chestnut and the other officer who was killed, John Gibson, also lay in honor after their deaths. The only other two people to have been given the same honor are civil rights leader Rosa Parks, who died in 2005, and the Rev. Billy Graham, who died in 2018.

There are still questions about Sicknick’s death, which was one of five resulting from the rioting. As the mob forced its way in, Sicknick was hit in the head with a fire extinguisher, two law enforcement officials said. He collapsed later on, was hospitalized and died. The officials could not discuss the ongoing investigation publicly and spoke to The Associated Press on the condition of anonymity.

Investigators are also examining whether he may have ingested a chemical substance during the riot that may have contributed to his death, the officials said.

The House impeached Trump for a second time a week after the attack on the charge of “incitement of insurrection.” But the Senate is likely to acquit him, with most Republicans arguing that there should not be a trial because Trump has left office and that it is time to move forward.

Democratic Sen. Dick Durbin of Illinois said on the Senate floor after the ceremony that he will remember Sicknick during the trial, and the loss that his family has endured because of Trump’s baseless claims that the election was stolen from him.

“For anyone who makes the argument that when it comes to Jan. 6 it’s time for America to get over it, I’m going to remember one police officer who gave his life to protect me and to protect this Capitol,” Durbin said.