Warner Bros. Studio Tour Hollywood recently reopened more than a year after doors were shuttered because of the coronavirus pandemic. Now, attendees will have a chance to explore the studio’s nearly 100 years of television and filmmaking history, highlighting the DC Universe and “Harry Potter.”

A firsthand look took place a couple of days before the tour opened in late June at the Southern California studio, which now welcomes families with children ages 5 and older.

“One of the most incredible things about Warner Brothers is the incredible history of epic films that are legendary,” said “Wonder Woman” director Patty Jenkins, who helped reopen the tour.

Here are some of the tour’s key features: 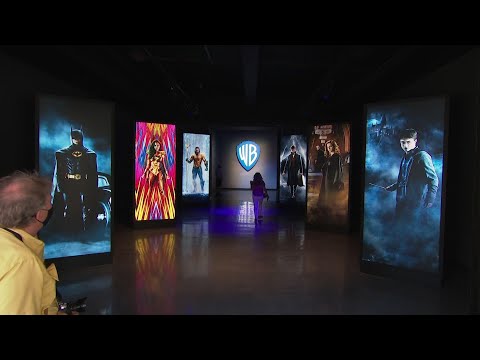 Selfie opportunities will be a plenty at the replicated, iconic “WB” water tower as attendees are able to walk along an aerial view of the sprawling studio lot. The walls are lined with mementos of the studio’s film, TV animation titles, dating back to 1923. Some of the highlights in this room include photos from classic films such as “Casablanca” and “Little Caesar.”

There is a dedicated wall area of the Oscar-winning film “Million Dollar Baby” and the boxing gloves worn by Hilary Swank. J.R.’ Ewing’s boots and hat from the television series “Dallas” are also on display. Several miniature soundstages with the words “PLEASE DO NOT SIT” are throughout the exhibit.

Step into the behind-the-scenes universe of DC superheroes and villains. One of the compelling aspects is the secret Batcave, where guests will find the authentic Batmobile from Tim Burton’s original “Batman,” the Tumbler from “The Dark Knight” and the Batwing from “Batman v. Superman.”

Costumes worn by Superman, Batman, Wonder Woman, Aquaman and the Flash are on display. Other standouts include Margot Robbie’s Harley Quinn and Jared Leto’s Joker costumes from “Suicide Squad.” Along with Christopher Reeve’s “Superman” costume, the exhibit has Michael Keaton’s suit from the 1989 film “Batman” and Lynda Carter’s “Wonder Woman” costume from the classic 1970s television show.

In an interactive experience, visitors can touch the glowing Lasso of Hestia from “Wonder Woman 1984.”

Director of the recent “Wonder Woman” films, Patty Jenkins, said she enjoyed seeing the costumes worn from her movies along with the rest of the DC characters featured in the exhibit.

“For there to be a museum to celebrate, that seems like something that is so important,” she said. “Then to have things for my own films in there as well, it’s an incredible honor and a very surreal crossing of the line of those two things.”

Create a photo opportunity inside Harry Potter’s cupboard under the stairs at 4 Privet Drive and understand the art of making potions on the re-created sets of “Harry Potter” and “Fantastic Beasts.”

Guests can sit underneath the Sorting Hat, which determines one’s Hogwarts house. And class is in session to learn about the unique creatures at Newt Scamander’s Shed of Magical Creatures.

“You get to experience the action, the magic and fun, and the props and costumes and the re-created sets,” said Bonnie Wright, who starred as Ginny Weasley in the Harry Potter film series.

Stage 48: Script to Screen is home to the “Friends” boutique that will be accompanied by the expanded Central Perk Café. The area features re-created sets inspired by the show including Joey and Chandler’s apartment, Monica’s apartment and Central Perk. Some costumes worn by the cast and other props from the show are from the 25th anniversary in 2019. Monica’s famous door frame and a “Friends” reunion-inspired spirit jersey, coffee mugs along with souvenirs and collectibles are included.

“It feels like the show,” Wheeler continued. “It feels like memory lane. I think people are going to be really, really excited to walk through and spend time here.”

The tour concludes with an exhibit spotlighting costumes and props, including the jersey worn by the late Chadwick Boseman as Jackie Robinson in the film “42” and the miniature blimp from Ridley Scott’s “Blade Runner.” The trombone that Robert Preston played in “The Music Man” is also on display.

Guests will have an opportunity to hold an authentic Oscar trophy. (Be sure to grasp with both hands. It’s heavy.)