PORT AUSTIN REEF LIGHT, Mich. (AP) — When Lou Schillinger and his volunteer cadre began restoring an 1890s lighthouse more than 2 miles off the Michigan shore in Lake Huron’s Saginaw Bay, they first needed to remove 30 years’ accumulation of gull and pigeon feces whose depth measured in feet rather than inches.

That was in the mid-1980s, when he reached an agreement with the U.S. Coast Guard to prevent the Port Austin Reef Lighthouse — his “Castle in the Lake” — from being dismantled and lost forever.

“That first summer my dad and I ran out there with a 14-foot rowboat and a 20-foot ladder because there was no access ladder and we just began shoveling manure,” said Schillinger, 66, president of the Port Austin Reef Light Association, a nonprofit group that in 2013 took title of the property from the federal government. No keeper had lived in the brick building with its five-floor tower since 1952. The roof was gone.

“We shoveled diligently,” Schillinger said. “I’d get friends out there, they would come out and volunteer and they’d show up for one day and they would never come back again because it was such a miserable job.” 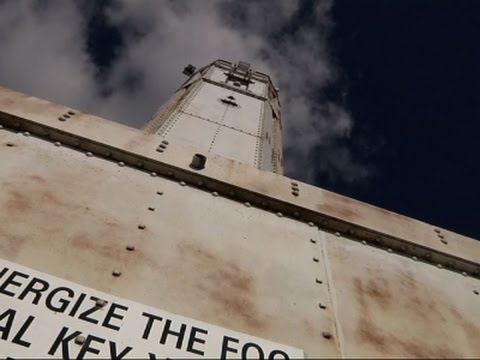 About 120 lighthouses no longer critical to the U.S. Coast Guard in 22 states and Puerto Rico have been acquired at no cost by government entities and nonprofits, or sold to private individuals eager to preserve the landmarks and maybe tap into their tourism potential since they became available under the National Historic Lighthouse Preservation Act of 2000. Upkeep was too expensive and their usefulness was in decline with the advent of GPS.

Winning bids have ranged from $10,000 for the Cleveland East Pierhead Light in Ohio to $934,000 for the Graves Light in Boston Harbor. More are auctioned every year, but buyers beware: Years of neglect, vandalism, limited access and hammering by the elements often make for labor-intensive money pits that are for neither the weak of heart nor stomach.

“People who are into this I believe have to have an internal fire, an internal passion, a conviction that these buildings and the history they represent are worth saving,” said Terry Pepper, 68, executive director of the Great Lakes Lighthouse Keepers Association.

Port Austin Light was built on a shallow reef. It’s accessible only by boat when winds are light, otherwise waves are too choppy to dock and disembark. Pepper’s association overcame similar access issues when it renovated a lighthouse on the 160-acre St. Helena Island, seven miles west of the Mackinac Bridge. It took about 20 years and $1.5 million to finish the job in 2005.

Nobody had lived in the 1870s lighthouse since 1922, making it a destination for partiers, scrappers and vandals, said Pepper. His association acquired the lighthouse before the 2000 act and also is restoring the Cheboygan River Front Range Light in Michigan.

“The roof had huge holes in it,” Pepper said. “Somebody had lit a fire on the floor in one of the bedrooms on the second floor and embers from that fire dripped down to the first floor and started burning that floor also. Every single window in the lighthouse was gone. All the doors on the inside of the brick lighthouse were gone. Railings on the stairs were gone and the plaster inside the lighthouse had been kicked down.”

Pepper estimates the group has spent $1.5 million and “untold thousands of hours of volunteer labor” restoring the St. Helena property, which must meet state and federal standards for historic preservation.

“We who are in this business, with this passion, have to be asking for money all the time,” Pepper said, whether it’s through grants, donations, selling memorabilia or offering Great Lakes lighthouse cruises.

Pepper is often contacted by prospective buyers because of his knowledge of lighthouses, particularly those in Michigan, where there are 129 — the most in the U.S.

Onshore lighthouses are no bargain either.

A volunteer group spent about a decade and nearly $1.9 million to acquire and renovate North Point Lighthouse in Milwaukee. It opened to the public in 2007 and since has attracted more than 80,000 tourists. It has cost more than $1.1 million to run it, mostly paid through entrance fees and events, donations, fundraising and grants.

About 30 miles to the north, Port Washington is in the process of acquiring an 81-year-old light on its breakwater with plans to raise and spend $1.5 million for restoration. And that structure does not have living quarters.

Back on the Port Austin Reef Light, time is measured in decades, not years, of work. Schillinger and his crews put on a new roof. They installed new windows and oak doors, and replaced the chimney. Vandals have been constant. Last fall, they started putting in a dock for easier access by boats, but a nasty late November gale wiped out their work and they had to start over this year.

“We’ve invested close to half-a-million dollars in that property in time and material over the last 30 years and almost I would say 95 percent of it’s all been out-of-pocket or donated time,” said Schillinger. He estimated it will take three years and at least $1.6 million more in grants and donations to prepare it for tours and renters who want to experience the keeper’s life.

“It’s been really been kind of a labor of love for all community members here in Port Austin.”