LOS ANGELES (AP) — A World Series win by the Los Angeles Dodgers left the team’s hometown fans celebrating in the streets and setting off fireworks late into the night, but some people used the occasion to smash store windows and loot merchandise, overshadowing a largely happy night of revelry.

However, things were peaceful Wednesday evening as buses containing the victorious Dodgers rolled into Dodger Stadium. Several hundred fans gathered outside to cheer their team.

Lydia Vargas, 70, wore her Clayton Kershaw T-shirt and blue tennis shoes to work before heading over to Chavez Ravine with her two daugthters and 19-year-old grandson.

She watched the buses of team members roll by.

“You could see a few of them waving through the windows, their hands to the windows,” Vargas said.

“This is amazing,” she said. “I’m from East Los Angeles, born and raised, and I used to hear the Dodgers on a transistor radio when I was 14 years old.” 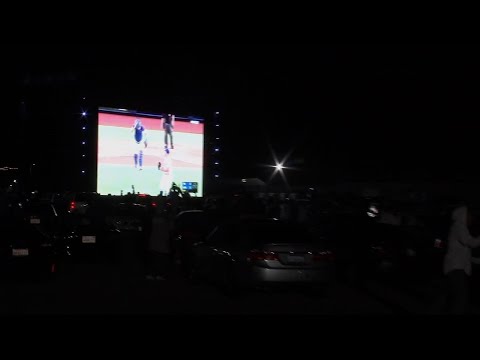 “There’s families, there’s kids,” she said. “We’ve got young, cheering fans. It’s awesome to see how we can get together and be peaceful.”

Officials had urged fans to avoid crowds and practice social distancing when celebrating to reduce the risk of coronavirus. County health authorities have blamed gatherings related to the Lakers’ and Dodgers’ championship seasons for spreading COVID-19 and preventing the county from reopening more quickly amid the pandemic.

In a year when they couldn’t pack the stands at Chavez Ravine and enjoy a Dodger dog with their baseball, fans gathered near Dodger Stadium, and motorists honked and cheered as part of an impromptu parade down Sunset Boulevard. Generations of families memorialized the end of a championship drought that began in 1988.

Although Tuesday night celebrations were largely peaceful, some objects were thrown at police, and officers fired rubber bullets, according to the Los Angeles Times.

“We’re seeing some large, at times unruly crowds, taking over intersections in various parts of the city,” the Los Angeles Police Department wrote on Twitter. “We urge all Angelenos to stay home if possible. If you must be out, please exercise caution. Should you encounter a large crowd, do not attempt to drive through it.”

Police declared an unlawful assembly early Wednesday in a downtown LA neighborhood where windows were shattered and shops were looted. Television news footage showed at least two people in handcuffs.

At least eight people were arrested within the city, LAPD Det. Meghan Aguilar said. The offenses were assault with a deadly weapon on a police officer, looting and reckless driving. Three police officers were left with minor injuries.

Aguilar said the stadium was not damaged.

Sheriff’s deputies moved through East Los Angeles trying to clear streets clogged with fans. At least 10 people were arrested in East LA and elsewhere in the county, mostly for failure to disperse, Sheriff Alex Villanueva said