When Nanci Bramson’s daughter tested positive for the coronavirus while far away at school in Michigan, it threw a fright into the Washington, D.C., resident.

But thanks to a group of parents who came together to help support University of Michigan students in Ann Arbor while they are sick or quarantining, Bramson was able to sleep at night.

“I knew that these people were surrogate parents to her,” Bramson said. The help “just restored my faith in humanity a little bit.” Both, the university and the group have made the experience “manageable,” she added.

Known as the “aMAIZEing Blue Crew” — a nod to the school’s colors — the group of mostly moms was started and is organized by Sherry Levine of Rye Brook, New York, who’s also a mother of a Michigan student.

After she spread the word on parent pages on Facebook, local volunteers stepped up to help fulfill student requests by dropping off groceries or supplies, or at times satisfying individual cravings for a favorite restaurant meal or coffee drink.

Other parents donate money to offset costs, Levine said, and the effort extends beyond just those battling the virus to students with other illnesses, be they on- or off-campus.

“Having a sick child when you’re an out-of-state parent is the scariest thing,” Levine said. “And it’s also really scary for these students who may be living on their own for the first time.” 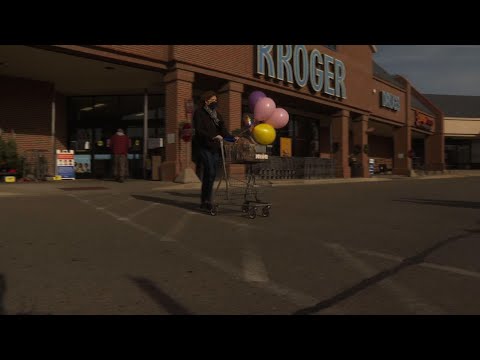 In the case of Sabrina Bramson, Nanci’s daughter, volunteers picked up a prescription and brought things like food and tea.

“They wanted to do whatever they could to make sure that I was comfortable,” she said. “I think that helped my mom calm down a lot because she knew that there was a group of moms that was making sure that I was taken care of.”

As more and more parents joined the effort, Levine said, it moved past just helping sick students to become “a matter of, like, spoiling these kids and just making them happy.”

There have been welcome packages stuffed with fuzzy socks, soap, lotion and lip balm, and football game-day goodie bags containing things like cookies, candy and University of Michigan swag.

Volunteer Erica Stowe, who helps monitor the email requests and makes deliveries, said her first run was for a student wanting soup. Another time she brought balloons, flowers and gluten-free muffins to a student for her birthday, after the mother reached out for help.

The operation has given her a renewed sense of purpose.

“It’s turned into this sort of really cool network of parents who are kind of all in the same boat with college kids during a pandemic,” Stowe said. “We’re all just trying to do our best for our kids and for the school community.”

For Levine, the experience has been life-changing.

“I had no idea that people like this existed in the world,” she said. “I cry from the goodness of these people, the resilience of these amazing students too.”

“One Good Thing” is a series that highlights individuals whose actions provide glimmers of joy in hard times — stories of people who find a way to make a difference, no matter how small. Read the collection of stories at https://apnews.com/hub/one-good-thing