Mayor says NYPD can get vaccines, governor says not so fast

NEW YORK (AP) — New York City police officers seeking protection from the ravages of COVID-19 were caught Wednesday in the latest political tug-of-war between the city’s mayor and the state’s governor.

Merely an hour after Mayor Bill de Blasio announced a plan to start providing vaccines to most officers, fellow Democrat and frequent foe Gov. Andrew Cuomo shot that idea down, saying the limited supply of shots should still be reserved, for now, mostly for health care workers and patients in nursing homes.

Police unions praised de Blasio’s plan, which called for vaccinating about 25,000 officers — with 10,000 receiving shots by Sunday. After Cuomo spoke, that praise turned to anger and confusion.

“Why the governor doesn’t find us important enough to get the vaccination is beyond my belief,” said Paul DiGiacomo, president of the Detectives’ Endowment Association.

De Blasio, at his daily coronavirus briefing, said the city wanted to ensure that officers who work in close proximity with the public and whose duties include performing CPR and administering the overdose medication Narcan have the opportunity to get vaccinated immediately.

The mayor’s announcement appeared to solve a dispute over which of the city’s first responders would be eligible for the vaccine soonest. 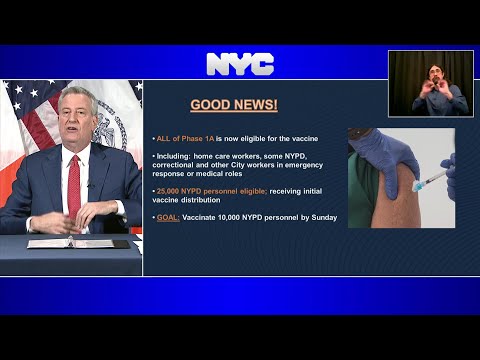 Fire department EMTs, included with hospital workers in the top tier of the state’s rollout guidelines, started receiving shots on Dec. 23. Police personnel argued they should also be eligible because they too respond to medical emergencies and often go to hospitals to interview crime victims.

But Cuomo said that despite de Blasio’s pronouncement, most NYPD officers still don’t qualify for vaccinations under the state’s guidelines.

“Police who are not health care workers are not yet eligible,” Cuomo said. “We need to get the health care population done first because they are the front line, as I mentioned before.”

Revised guidelines released by the state Tuesday did not explicitly say that police officers could be vaccinated, but a de Blasio spokesperson said city officials were told they could include police and correction officers working in the city’s jails as front-line workers eligible for the shots.

“New York City is asking for the freedom to vaccinate more high-risk workers who are out there saving the lives of New Yorkers,” said De Blasio spokesperson Bill Neidhardt. “It’s simple. We have the doses, let’s put it in their arms and help them save lives.”

Some states have already put police officers near the front of the vaccine line. Arkansas moved police officers and firefighters up to the first phase of vaccinations this week, and Massachusetts will begin administering COVID-19 vaccine doses to police, firefighters and other first responders on Jan. 11.

The NYPD has about 35,000 uniformed members, but only about 25,000 have public-facing jobs. About 400 officers are medics in the emergency service unit and are considered vaccine-eligible front-line workers under Cuomo’s rules.

Patrick Lynch, the president of the Police Benevolent Association union that represents patrol officers, praised de Blasio’s announcement in a statement as “an important step towards clearing away the red tape and protecting both police officers and the New Yorkers we help every single day.”

A message seeking comment was left with Lynch’s spokesperson following Cuomo’s remarks. DiGiacomo, the detectives’ union chief, said he was on the phone for hours Wednesday afternoon trying to see what he could do to get Cuomo’s objection reversed. Six NYPD detectives have died of COVID-19.

Cuomo and de Blasio have clashed repeatedly since the coronavirus pandemic struck last spring. When the mayor announced in April that city school buildings would be closed through the rest of the school year, Cuomo responded, “That’s his opinion.”

“It appears to me to be a personality conflict between the mayor and the governor,” said DiGiacomo. “What’s going on with the way the politicians are treating the police is unethical and unfair.”