COLUMBUS, Ohio (AP) — Voters in the county that is home to Ohio’s capital who received the wrong absentee ballots will be mailed corrected replacement ballots, the county elections board said Wednesday.

The Franklin County Elections Board in Columbus blamed the malfunction on a high-speed scanner that proofs ballots for accuracy and said the system is now working as it should.

The agency said it’s working with its vendor, Danbury, Connecticut-based BlueCrest Inc. “as it works to correct this mistake.”

The printing and mailing company, which has a specialty in mail ballot processing equipment, did not immediately respond to a request for comment.

Last month, it announced a contract with Phoenix-based Runbeck Election Services, which does not print or mail ballots in Franklin County, “to help their clients meet the surge in mail-in ballot printing, inserting, and sorting,” according to BlueCrest’s website.

The elections board said it’s still trying to figure out how many of the county’s estimated 250,000 absentee ballots were affected, judging by when the mistake happened.

Some ballots had an incorrect congressional race, while others had the correct information but were sent to voters in a different precinct.

The board said voters who received wrong ballots can also consider casting an in-person vote at the election board on the city’s north side. 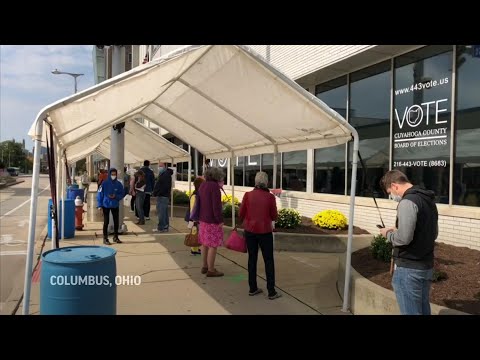 “The Board of Elections will continue to be transparent to the public as we gain greater clarity on the exact number of voters affected,” said elections board spokesman Aaron Sellers.

Incorrect ballots already returned to the elections board must not be processed before official vote counting begins on election day, the Ohio secretary of state’s office told Franklin County elections officials. If returned, corrected replacement ballots can be logged in their place, according to the secretary of state.