HONOLULU (AP) — Just as the coronavirus pandemic began to take hold, in February, four people set sail for one of the most remote places on Earth — a small camp on Kure Atoll, at the edge of the uninhabited Northwestern Hawaiian Islands.

There, more than 1,400 miles from Honolulu, they lived in isolation for eight months while working to restore the island’s environment. Cut off from the rest of the planet, their world was limited to a tiny patch of sand halfway between the U.S. mainland and Asia. With no television or internet access, their only information came from satellite text messages and occasional emails.

Now they are back, re-emerging into a changed society that might feel as foreign today as island isolation did in March. They must adjust to wearing face masks, staying indoors and seeing friends without giving hugs or hearty handshakes.

“I’ve never seen anything like this, but I started reading the book “The Stand” by Stephen King, which is about a disease outbreak, and I was thinking, ‘Oh my goodness, is this what it’s going to be like to go home?’” said Charlie Thomas, one of the four island workers. “All these … precautions, these things, people sick everywhere. It was very strange to think about.”

The group was part of an effort by the state of Hawaii to maintain the fragile island ecosystem on Kure, which is part of the Papahanaumokuakea Marine National Monument, the nation’s largest contiguous protected environment. The public is not allowed to land anywhere in the Northwestern Hawaiian Islands. 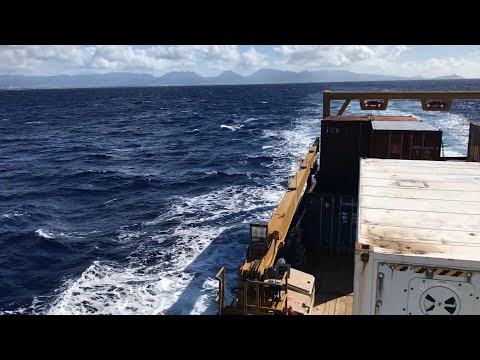 Kure is the only island in the northern part of the archipelago that is managed by the state, with the rest under the jurisdiction of the federal government. A former Coast Guard station, the atoll is home to seabirds, endangered Hawaiian monk seals and coral reefs that are teeming with sea turtles, tiger sharks and other marine life.

Two field teams go there each year, one for summer and another for winter. Their primary job is removing invasive plants and replacing them with native species and cleaning up debris such as fishing nets and plastic that washes ashore.

Before they leave, team members are often asked if they want to receive bad news while away, said Cynthia Vanderlip, the supervisor for the Kure program.

“A few times a day, we upload and download email so people stay in touch with their family and friends. That’s a huge morale booster, and I don’t take it lightly,” Vanderlip said. “People who are in remote places … rely on your communication.”

Thomas, the youngest member of the team at 18, grew up in a beach town in New Zealand and spent much of her free time with seabirds and other wildlife. She finished school a year early to start her first job as a deckhand for an organization dedicated to cleaning up coastlines before volunteering for the summer season on Kure Atoll.

The expedition was her first time being away from home for so long, but she was ready to disconnect.

“I was sick of social media, I was sick of everything that was sort of going on,” she said. “And I thought, you know, I am so excited to get rid of my phone, to lose contact with everything ... I don’t need to see all the horrible things that are going on right now.”

When Thomas left New Zealand for Hawaii, there were no virus cases nearby that she can recall. By the time she left Honolulu for Kure, the virus was starting to “creep a little closer” to the islands.

“We were just seeing stories on the television and that sort of thing,” she said. “But, you know, we’re off. We’re leaving. It wasn’t really a big concern for us.”

Once on Kure, getting a full picture of what was happening in the world was difficult.

“I guess I didn’t really know what to think because we were getting so many different answers to questions that we were asking,” she said.

Thomas is now in a hotel in quarantine in Auckland, where she lives with her parents, sister and a dog named Benny. She will miss hugs and “squishing five people on a bench to have dinner,” she said.

Joining her on the island was Matthew Butschek II, who said he felt most alone when he received news about two deaths.

His mother emailed to tell him that her brother had died. Butschek said his uncle was ill before the pandemic, and he was not sure if COVID played a role in his death. He could not grieve with his family.

Then Butschek, 26, who lives near Dallas, received word that one of his best friends had been killed in a car accident.

“I remember reading that, thinking it was a joke and then realizing it wasn’t, so my heart started pounding and I was breathing heavily,” he said.

The isolation of Kure “felt strong” at that moment, but he said he tends to like his space when emotional.

“I drank a beer for him and just kind of thought about memories,” he said, describing sitting in his bunk house alone after a long day of fieldwork.

While in quarantine last week, Butschek looked out the window of his cabin in Honolulu and saw school-aged children playing on rocks and climbing trees — all wearing face masks. It reminded him of apocalyptic movies.

“It’s not normal for me. But everyone is like, yeah, this is what we do now. This is how we live,” he said.

Leading the camp on Kure was wildlife biologist Naomi Worcester, 43, and her partner, Matthew Saunter, who live together in Honolulu.

Worcester first visited the island in 2010 and has returned every year since. She’s a veteran of remote fieldwork in Alaska, Washington, Wyoming and the Sierra Nevada mountains.

Working on the atoll means getting information about the world slowly, and often not at all, Worcester said.

A few weeks ago, she departed Kure and arrived on Midway Atoll, where she and the rest of the crew stayed for several days before flying back to Honolulu. Midway has limited internet access and basic cable television. During a moment alone, she turned on a TV.

Her focus for the coming months will be to start arranging the Kure trip for next summer. She also fears for the health and safety of her friends and family.

“If there was anything serious that happened when I was gone, they would have told me, but then again, maybe not,” she said.

She also worries about the pandemic’s cost in a larger sense.

“With so much uncertainty and so many emotions running high and, you know, our country is divided on so many things ... there is kind of an underlying fear as far as what the future could hold and how people could respond.”

Saunter, 35, has worked on Kure since 2010, the same year he met and began dating Worcester. They have been partners in life and on the island for a decade.

In 2012, they began leading teams at the field camp.

After so many years at the camp, Saunter said, isolation isn’t much of a factor for him. He believes the leadership skills he’s learned in the wilderness will translate well to life in the pandemic.

To be successful on Kure, you have to tackle problems head-on and control your emotions, he said.

“You know people’s emotions are getting the better of them, and it’s kind of at the cost of everybody, so it seems very irresponsible,” he said. “If we had taken it more seriously and practiced more precautions, we could have squashed this thing.”

He remembers being on Kure when his sister called the outbreak a “pandemic.”

“I got an email from my sister and she used the word ‘pandemic,’” he said. “I thought to myself, huh, maybe we need to look that up, because what’s the difference between a pandemic and an epidemic?”