Black lawmakers reflect on civil rights then, and now

WASHINGTON (AP) — The nation is once again at a crossroads over racial inequity, marking the 57th anniversary of the Rev. Martin Luther King Jr.’s “I Have a Dream Speech,” yet torn apart by the Black Lives Matter protests against the police shooting of another Black man, this time in Wisconsin.

Friday’s commemoration of the 1963 March on Washington comes as a new civil rights era is unfolding in real time in Kenosha, Wisconsin, after Sunday’s shooting of Jacob Blake. He now joins a growing list of Black Americans whose treatment by law enforcement has sparked worldwide protests, echoing King’s speech at the Lincoln Memorial, where he said, “We can never be satisfied as long as the Negro is the victim of the unspeakable horrors of police brutality.”

In recent weeks, several leading Black members of Congress reflected in interviews with The Associated Press on their experiences then, and now, as the House and Senate debated the George Floyd Justice in Policing Act to overhaul law enforcement procedures. 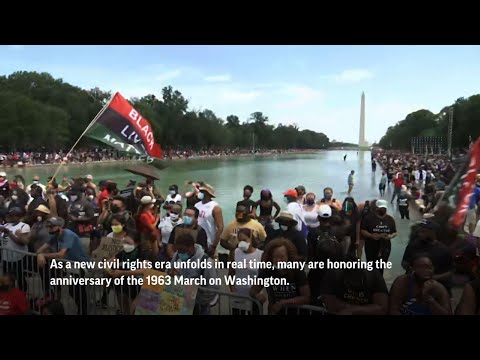 Maxine Waters said she started focusing on police violence in 1979 after Los Angeles police shot a Black homemaker, Eula Love, during a confrontation over an unpaid gas bill.

Waters rallied against the police chief, fought to ban the chokehold and pushed for greater civilian oversight. By 1991, as a freshmen member of Congress, she was a leading voice against police violence after the videotaped beating of Black motorist Rodney King by LAPD officers.

This summer as demonstrators filled streets nationwide over the police killing of Floyd she told The Associated Press, “The thing that struck me was, why did it take so long? We’ve been dealing with this issue for so many years.”

Floyd was killed over Memorial Day weekend in Minnesota after being detained by an office who pressed him to the ground, a knee on his neck. She noted the chokehold issue, in particular, “has been around for a long time.”

While the police legislation passed the House, another version stalled in the Senate. “It’s not over,” said Waters, now the chair of the Financial Services Committee. “And it’s not going to be over until we succeed in changing and re-imagining what policing is all about and how it should work.”

During the floor debate over the policing bill, Rep. Bennie Thompson, the chairman of the Homeland Security Committee, urged his colleagues to “walk a mile” in his shoes to understand the depth of the issue before them.

He grew up in rural Mississippi in the middle of the last century, eventually rising to become mayor of his tiny hometown of Bolton.

“Anytime we wanted to integrate a restaurant or a motel or a public school, the police was called out to prevent us from following the public accommodations law,” he told AP.

“So when you saw the police when Bennie Thompson grew up, you would run, you wouldn’t stop and wave, because you didn’t see them as somebody friendly.”

Thompson, 72, came to Congress in 1993. When he gaveled open the Democratic National Convention this month, he was the first from his state to serve as chairman.

He told his colleagues he is passing down to his grandson the same instructions he was given as a teen learning how to drive 50 years ago.

“Be careful. If the police stop, you don’t do anything other than keep your hands on the wheel and say, Yes, sir. No, sir,” he said. “People should not be afraid of the police. The police should be viewed as a friend in the community.”

Democratic whip James Clyburn said he hasn’t been stopped by police without apparent reason, as was GOP Sen. Tim Scott, a fellow South Carolinian and the author of the Senate Republican police bill, who publicly shared his stories of being pulled over for “driving while Black.”

But at 80, Clyburn is now willing to speak more openly about his own encounters as a Black man, including one confrontation he had with a shop owner as a high school student.

He told the AP he declined to include it in his memoir, which was published shortly after Trayvon Martin’s 2012 killing, because he was concerned he’d be accused of “playing” on the issue.

Clyburn was in 11th grade in 1950s rural South Carolina when he and two friends went to a local grocery store.

The clerk at the cash register overcharged them. “I mean, he was treating us as if we didn’t know how to count,” Clyburn recalled.

Clyburn put the items back on the counter “and started counting it out for him. He took objection to that.”

From there, things escalated. “We got in an argument. I left the store. I got in my car, attempted to crank the car. He walked out with a long-barreled pistol, laid it in the window and said, ‘You owe me 15 more cents,’” Clyburn said.

Clyburn went on to become colleagues with the late John Lewis at the Student Nonviolent Coordinating Committee organizing student sit-ins of the 1960s, and in Congress where they served until Lewis’ death in July. A younger Thompson joined SNCC later as a student organizer.

Now the highest-ranking Black American in Congress, Clyburn was speaking Friday at a satellite rally in Columbia, South Carolina.

“So there’s a lot of work for Black Lives Matter to do,” Clyburn told AP, “and I hope to live long enough to help them get it done.”