The Vatican took the extraordinary step Tuesday of publishing its two-year, 449-page internal investigation into the American prelate’s rise and fall in a bid to restore credibility to the U.S. and Vatican hierarchies, which have been shattered by the McCarrick scandal.

The report put the lion’s share of blame on a dead saint: Pope John Paul II, who appointed McCarrick archbishop of Washington, D.C., in 2000, despite having commissioned an inquiry that confirmed he slept with seminarians. The report found that John Paul believed McCarrick’s last-minute, handwritten denial: “I have made mistakes and may have sometimes lacked in prudence, but in the seventy years of my life I have never had sexual relations with any person, male or female, young or old, cleric or lay,” McCarrick wrote.

But the report also charted the alarm bells that were ignored, excused or dismissed in 1992-93 when six anonymous letters were sent to U.S. church officials and the Vatican’s ambassador to the U.S. alleging McCarrick was a “pedophile” who would sleep in the same bed with young men and boys. Those alarms continued, when a Catholic psychiatrist traveled to the Vatican in 1997 to report that his priest-patient was a victim of McCarrick’s sexual abuse. 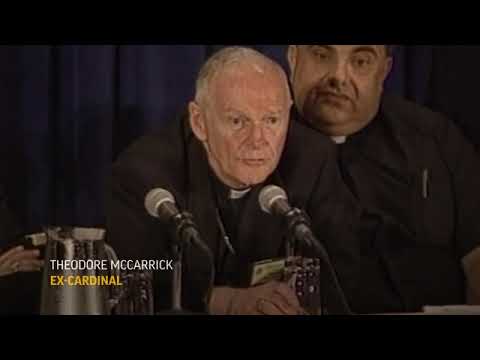 McCarrick, 90, was defrocked by Francis last year after a Vatican investigation confirmed the globe-trotting envoy and fundraiser had sexually molested adults as well as children. The case created a credibility crisis for the church since the Vatican had reports from authoritative cardinals dating to 1999 that McCarrick’s behavior was problematic, yet he became an influential cardinal, kingmaker and emissary of the Holy See’s “soft diplomacy.”

The findings accused bishops dead and alive of turning a blind eye to his misconduct and said the charismatic McCarrick simply ignored informal restrictions ordered up in 2006 after Pope Benedict XVI, receiving yet another alarming report, decided not to investigate or sanction him seriously.

Significantly, the report greatly undermined allegations that Francis was at fault for the McCarrick scandal that were lodged in 2018 by a former Vatican ambassador to the U.S. The report actually provided evidence that the ambassador, Archbishop Carlo Maria Vigano, was part of the cover-up.

The report said Francis never lifted or modified Benedict’s informal restrictions on McCarrick, as Vigano claimed, because the restrictions were never enforced in the first place. The report provided evidence that Vigano was well aware during Benedict’s papacy that McCarrick had ignored the restrictions, admitting in a 2012 letter to the Vatican that its written admonition to McCarrick “is a dead letter.”

“Pope Francis had heard only that there had been allegations and rumors related to immoral conduct with adults occurring prior to McCarrick’s appointment to Washington,” the report said. “Believing that the allegations had already been reviewed and rejected by Pope John Paul II, and well aware that McCarrick was active during the papacy of Benedict XVI, Pope Francis did not see the need to alter the approach that had been adopted.”

Francis changed course after a former altar boy came forward in 2017, alleging McCarrick groped him when he was a teenager during preparations for Christmas Mass in 1971 and 1972 in New York. The allegation was the first solid claim against McCarrick involving a minor and triggered the canonical trial that resulted in his defrocking.

McCarrick now lives in a residence for priests as a layman. His lawyer, Barry Coburn, declined to comment.

Vigano on Tuesday blasted the Vatican report as “further proof of the corruption and bad faith of those who for too long have been silent, made denials and turned their gaze elsewhere, who today must be held accountable.”

The report contains heartbreaking testimony from people who tried to raise the alarm about McCarrick’s inappropriate behavior, including with children, in the mid-1980s.

One woman identified only as “Mother 1” told investigators she sent a series of anonymous letters to U.S. Catholic leaders, warning about McCarrick. She described how she once discovered McCarrick, a family friend, with his hands rubbing her two sons’ inner thighs in the living room. “It was more than strange. It was abnormal. I almost dropped the casserole dish I was holding in my hands.” Her letters went unheeded.

While the findings provided new details about what the Vatican knew and when, it didn’t directly blame or admit that the church’s internal “old boys club” culture allowed McCarrick’s behavior to continue unchecked. Cardinals and bishops have long been considered beyond reproach and claims of homosexual behavior are used to discredit or blackmail prelates, so often are dismissed as rumor. There also has been a widespread but unspoken tolerance of sexually active men in what is supposed to be a celibate priesthood.

The church has long considered sex by priests with other adult men or women as sinful but consensual, with flags only raised in recent years when minors were involved.

But the McCarrick scandal, which erupted during the #MeToo era, demonstrated that adult seminarians and priests can be sexually victimized by superiors because of the power imbalance. And yet the church’s legal system has had no real way to address such abuse of authority.

James Grein, whose testimony that McCarrick abused him for two decades starting when he was 11 was key to McCarrick’s downfall, said he was pleased the report was finally released. He said he was hopeful it would bring some relief as well as a chance to “clean” up the church.

“There are so many people suffering out there because of one man,” Grein said. “He’s destroyed me and he’s destroyed thousands of other lives. ... It’s time that the Catholic Church comes clean with all of its destruction.”

The bishops of the four U.S. dioceses where McCarrick served — Metuchen and Newark, N.J., New York and Washington — welcomed the report, despite the shame the scandal has brought and the pain McCarrick caused his victims.

“Like everyone else, I am disgusted and appalled by what has taken place,” Metuchen Bishop James Checchio said.

He lamented that his diocese’s founding in 1981, with McCarrick as its first bishop, would “always be associated with the history of Theodore McCarrick and the culture of abuse, silence and shame that was allowed to perpetuate in the dark corners of our past.”

Francis commissioned the report after Vigano issued a blistering expose of the two-decade McCarrick cover-up in 2018, naming about two dozen U.S. and Vatican officials who knew of his misconduct but failed to effectively sanction him.

Vigano cited former seminarians who described the harassment and abuse they endured while “Uncle Ted,” as McCarrick liked to call himself, was their bishop in New Jersey, and they were forced to sleep in his bed during weekend trips to his beach house.

Vigano’s most explosive claim was that Francis himself lifted “sanctions” imposed by Benedict and made McCarrick a trusted adviser. Vigano demanded Francis resign, claiming he had warned the pope in 2013 that McCarrick had “corrupted generations of seminarians and priests.”

Several of Vigano’s central assertions were confirmed, but others were disproved. The report rejected Vigano’s claims involving Francis outright: “No records support Vigano’s account and evidence as to what he said is sharply disputed.”

The summary also cites a previously unreported case in which Vigano in 2012 failed to act on Vatican instructions to investigate new claims against McCarrick by a Brazilian-born New Jersey priest.

The report drew on documents from Vatican departments, U.S. dioceses and seminaries and the Vatican’s U.S. Embassy. Investigators interviewed 90 people, including McCarrick’s victims, former seminarians and priests, and officials from the U.S. Conference of Catholic Bishops.