NASHVILLE, Tenn. (AP) — From skateboarding to Fleetwood Mac to learning Cardi B’s rump-shaking choreography, TikTok users got creative in a pandemic year with new songs, dances and memes in 60 seconds or less.

The social media video app on Wednesday shared its list of top 100 videos, creators and trends in America during 2020, recapping a year of viral videos that were sometimes a needed distraction in a tumultuous year.

“The through line is that these are videos that brought joy and inspiration to millions of Americans in a year that has been a bit of a whirlwind for everyone as we all try to figure it out,” said Kudzi Chikumbu, director of creator community at TikTok.

The platform has been widely associated with Generation Z and millennials who experiment with the app’s digital effects like green screens and and influencers who have launched careers based on the shared videos.

The Weeknd’s “Blinding Lights” and Jason Derulo’s “Savage Love” inspired TikTok dance challenges that made them among the top songs used on the app, as well as the not-safe-for-grandma “WAP” by Cardi B and Megan Thee Stallion.

For some TikTok creators, the pandemic itself became inspiration to create a connection with other users. Comedian Caitlin Reilly used the app during quarantine to make fun of those annoying coworkers on Zoom for one of the top liked videos. And rapper Curtis Roach made an anthem for the endless days at home with his song and meme “Bored in the House.” 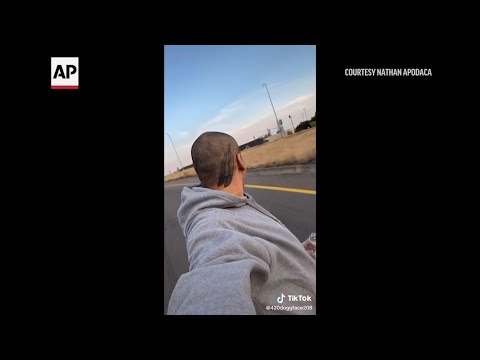 The second most popular video was an Idaho man named Nathan Apodaca who shot to fame after casually and coolly belting out “Dreams” by Fleetwod Mac while skateboarding on an interstate.

“It’s really about capturing an essence and a moment,” said Chikumbu of Apodaca’s video. “What Gen Z would call ‘immaculate vibes.’”

But the most liked TikTok video is actually even harder to explain to those who haven’t used the app. Bella Poarch, who has 45 million followers, created a simple but cute lip synch video with a few seconds of well-timed head nods and eye rolls.

“She’s gone on to create a lot of more dances and facial expressions and launching her own businesses and really turning her art form into her career,” said Chikumbu.

While the app might be geared toward youth, Chikumbu said that the growth of TikTok this year has pushed it more into mainstream culture.

“You’re seeing everyone from the teenager to the college students with their parents and then their grandparents all making videos,” said Chikumbu. “And now TikTok truly transcends generations, particularly in this year when people had a lot of time to dig in and not only watch, but try.”