Rep. Jamie Raskin implored senators in his closing speech to exercise “common sense about what just took place in our country” and find Trump guilty of inciting an insurrection. Raskin is the lead prosecutor for the House.

Another impeachment manager warned senators that acquitting Trump could have lasting consequences for the country. Rep. Joe Neguse said that “if we pretend this didn’t happen, or worse, if we let it go unanswered, who’s to say it won’t happen again.”

Trump’s lawyers will begin their arguments when the trial resumes at noon Friday.

Chilling security video of last month’s deadly insurrection at the U.S. Capitol has become a key exhibit in Donald Trump’s impeachment trial as lawmakers prosecuting the case wrap up their opening arguments for why Trump should be convicted of inciting the siege. 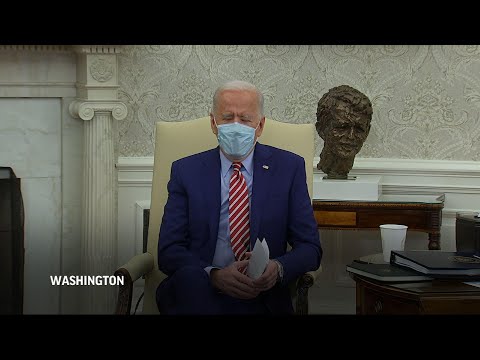 — Did someone say impeachment? Biden avoids wading into debate

— Trump can’t hang on to lawyers after false election claims

HERE’S WHAT ELSE IS GOING ON:

One of Donald Trump’s lawyers is calling the presentation by House impeachment managers “offensive.”

David Schoen told reporters on Thursday that Democrats were “making a movie” and had yet to tie the Jan. 6 siege at the U.S. Capitol to the former president.

He contended that the use of chilling video of the riot shown repeatedly by House Democrats during Wednesday’s arguments was impeding efforts to bring unity.

Democratic House impeachment prosecutors have used their time to air searing video footage of the attack on the Capitol building and to build their case that Trump was responsible for the rioters’ conduct that day.

Lawyers for former president Donald Trump are planning to begin and wrap up their defense in his impeachment trial in less than a day, using far fewer than their allotted argument hours.

That’s according to his senior adviser Jason Miller, who said there could even be enough time left over for planned questioning to begin.

The rules for the trial gave both sides two days for arguments, lasting up to eight hours each day. Democratic House impeachment prosecutors have used their time to air searing video footage of the January 6 attack on the Capitol building and to build their case that Trump was responsible for the rioters’ conduct that day.

Friday is the day Trump’s lawyers are set to begin. It remains unclear when the final vote will take place, but Republicans have expressed a desire to wrap the trial quickly, even by Saturday.

South Dakota Sen. Mike Rounds said he thinks most senators “would like to have this completed by Saturday.”

House Democratic prosecutors began their second day of arguments in former President Donald Trump’s impeachment trial by offering multiple examples of how Trump had cheered on or promoted acts of violence among his supporters in the years leading up to the Capitol insurrection on Jan. 6.

Lead impeachment manager Jamie Raskin said that the litany of examples showed “obvious intent” as Trump told his supporters to come to Washington, and then to “fight like hell” just before they laid siege to the U.S. Capitol.

Raskin showed clips of Trump encouraging violence and also sanctioning violence afterward – including his telling a crowd to “knock the crap out of” a protester at one of his speeches. He told the crowd that he would pay their legal fees if they did. Another clip showed him saying it was “very, very appropriate” when some of his supporters attacked a protester at a Trump event. “That’s what we need a little bit more of,” Trump said.

The Democrats also laid out evidence that Trump showed no concern for people who may have been endangered, or remorse for the role he played, including when Michigan Gov. Gretchen Whitmer was the target of a white supremacist plot in her state.

Raskin said Jan. 6 “was not some unexpected, radical break from his normal law-abiding and peaceful disposition.”

Urging senators to convict Trump of “incitement of insurrection” and ban him from holding future office, Raskin said Trump knew that if he egged them on, “his most extreme followers would show up bright and early, ready to attack, ready to engage in violence, ready to fight like hell for their hero.”

The White House press secretary says President Joe Biden wasn’t offering a “projection or a prediction” on the outcome of Donald Trump’s impeachment trial when Biden weighed in on the proceedings earlier Thursday.

Biden had said that “some minds may be changed” after graphic videos of the Jan. 6 siege of the Capitol were played during the Senate trial.

Spokeswoman Jen Psaki says that comment reflected “how the president felt” when he watched some of the news coverage of the trial. She says the president was “impacted by the video as a human being.”

Biden and his aides generally have avoided weighing in on the trial and whether the former president should be convicted.

Psaki was pressed during her briefing Thursday about whether Biden has an obligation to weigh in. She said Biden “knows there’s a role for Congress to play and a role for him to play.” She said Biden’s role “is to be president of the United States” and to “govern.”

House Speaker Nancy Pelosi says she’ll sponsor legislation awarding the Congressional Gold Medal to the U.S. Capitol Police and other law enforcement officers who protected the Capitol as it was overrun by supporters of former President Donald Trump.

Capitol Police Officer Brian Sicknick died after the Jan. 6 attack, one of five people to be killed. More than 70 officers with the U.S. Capitol Police were injured. Many are struggling with the emotional trauma they experienced that day.

Pelosi’s office was ransacked by rioters during the attack. Pelosi said Thursday, “We will never forget.”

Congress has commissioned gold medals as its highest expression of national appreciation for distinguished achievements and contributions. The first recipient was George Washington. Over the years, the medal has been presented to military leaders, authors, athletes and civil rights icons.

At least two-thirds of the House and Senate must co-sponsor Congressional Gold Medal legislation before it is considered in committee.

The House is continuing its impeachment case against Trump over the riot. Trump’s lawyers are expected to launch their defense by week’s end.

President Joe Biden says he believes “some minds may be changed” in former President Donald Trump’s impeachment trial after the display of searing, graphic videos of the assault on the U.S. Capitol.

Biden told reporters in the Oval Office on Thursday that he didn’t watch any of the previous day’s proceedings live but later saw news coverage. The Democratic House impeachment managers used security video as part of their case, and the violent images of the riot shook senators and TV viewers alike.

Biden has steadfastly refused to weigh in on the trial and again on Thursday said his focus was on fulfilling his campaign promise to battle the coronavirus pandemic. Biden says the nation has “to move on.” Aides have said Biden will address the proceedings after a verdict is reached.

The House is continuing its case Thursday. Trump’s lawyers are expected to launch their defense by week’s end.