Investigator was shot at least twice by Wisconsin suspect

CALEDONIA, Wis. (AP) — An undercover sheriff’s investigator who was shot at least twice in an exchange of gunfire that killed a homicide suspect at a Wisconsin gas station is recovering at a hospital, authorities said.

Racine County Sheriff Christopher Schmaling said the investigator, whose name hasn’t been released, wanted to know as he was being treated whether his gunfire had wounded any innocent bystanders. No one else was hurt as he brought down the suspect in Caledonia on Tuesday.

“And he was thinking to himself ‘As I’m firing, are my rounds going to hit somebody innocent?’ And that’s what he asked me (at the) hospital, while he lied there with bullet holes in his own body, he said ‘Sheriff, did I hit anybody innocent?’ That’s what he asked. Nothing else,” Schmaling told the Racine County Board on Tuesday night, The Journal Times reported.

The investigator is recovering at Ascension All Saints Hospital in Racine and is doing well, the sheriff said. Authorities haven’t yet released the name of the 32-year-old Hartland man he shot and killed at the Mobil gas station. 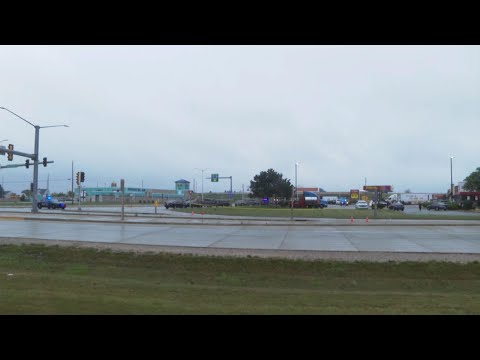 Tuesday’s chain of events began about 7:30 a.m., when the suspect approached and fatally shot Anthony F. Griger, 22, of Elkhorn, as Griger was filling his car with gas at the Pilot Travel Center about 2 miles (3 kilometers) away, according to authorities.

The sheriff told the county board that the suspect “then rummaged through” Griger’s pockets for a set of keys, but then decided he didn’t want that car.

“He got out of that vehicle, and found another random person driving to the gas station ... and he shot at that person. That person got out of there as fast as they could,” Schmaling said.

Schmaling has said a motive for the initial shooting has not been determined. He released Griger’s name Wednesday and said his family, including his wife, had asked for privacy.

Schmaling said he had watched video of the Pilot Travel Center shooting and described it as an execution.

The suspect then got back into his own vehicle and sped off to the Mobil station, where he encountered the investigator pumping gas into his unmarked squad car, officials said.

“This individual, is clear to me after watching the video, had no idea who he (the suspect) is about to encounter. And this, we’re splitting seconds here. He came out, gun drawn and approached the investigator, and started to shoot at him. We are again splitting seconds. The investigator immediately began firing back at him, falling to the ground and taking on at least two rounds, and then firing back at him,” Schmaling said.

The sheriff said he finds some relief that it was his investigator that the suspect approached at the Mobil station instead of a random citizen.

“Because he was armed and he was trained. He knew what to do when somebody came at him. Otherwise, this maniac would’ve gone on another rampage,” Schmaling said.