What appears to have been a woefully misguided attempt at humor turned into a national embarrassment for the Southern California city of Newport Beach, leaving behind outrage, disbelief and finally, hope for change.

On Thursday, the stepsister of Anne Frank visited privately with students who attended the party and described an emotional meeting in which she recounted her experiences at the Auschwitz death camp.

When she was freed at 16, Holocaust survivor Eva Schloss, now 89, was left with only her mother. The rest of her family perished.

When the students saluted the swastika at the party last weekend, “they didn’t realize what it really meant,” she said. “They just thought it was a joke.”

They apologized profusely during the meeting, which also included parents, community members and student leaders from Newport Harbor High School.

Schloss said she hoped there would be more education about the Holocaust and a war now 75 years in the past. The photo was a reminder that the warning of the Holocaust — never forget — sometimes is.

The students “don’t realize what those signs really mean to victims who have gone through this period,” she said. 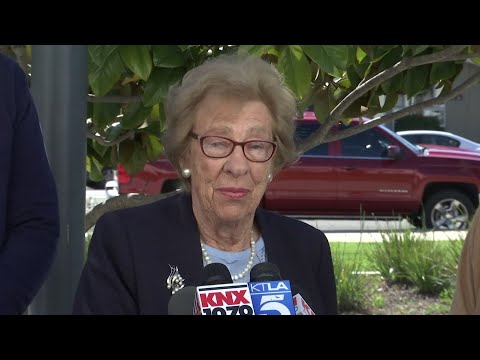 She expressed confidence that the students “have learned a lesson for life.”

The photo shocked the wealthy seaside enclave known for its beaches and placid streets dotted with palms. Hundreds of people came to a meeting at the school Monday to express outrage.

“I thought it was horrible what they did,” Alan Ramirez, a 15-year-old sophomore at Newport Harbor, said Thursday.

He said he was disappointed because the photo gave the school a bad image, but he did not think any of those involved were actually embracing Nazism or intending to vilify Jewish people. Rather, he said, they were “caught in the moment, going with the crowd.”

A mother of two students who attend Newport Harbor said she and her children were appalled by the photo, and most of the student body felt the same way.

“The majority of these kids were blown away by this,” Kathy Mader said as she picked up her sons.

Mader said she and her children were thankful it was discussed at school.

“I have to hope it was just stupidity,” she said.

School Principal Sean Boulton declined to discuss the actions of specific students but said “society as a whole has normalized hate language and hate speech.”

“They got caught up in a larger national issue,” he said.

Like Frank, the world-famous Jewish diarist who died in the Holocaust, Schloss and her family went into hiding in Amsterdam during World War II but were betrayed. They were sent to the Auschwitz death camp. She was eventually liberated by the Russian army in 1945.

Schloss, whose mother married Frank’s father, Otto Frank, in 1953, has told her story in talks to schoolchildren and in books including “Eva’s Story: A Survivor’s Tale by the Stepsister of Anne Frank.”

Frank was born in Germany and fled to the Netherlands with her family as Adolf Hitler rose to power.

After Germany invaded the Netherlands, her father created a secret living space where she kept her now-famous diary for two years before being discovered. Frank died in the Bergen-Belsen concentration camp at age 15.