IRONTON, La. (AP) — Back when the Mississippi River flowed wild, its ever-shifting waters acted as a continent-sized earth mover, picking up sand and dirt from the North, depositing it in the Delta region and eventually creating the land that is now south Louisiana.

Thousands of years later, the mighty river is held in check with man-made levees and flood-control systems. But Louisiana officials are making plans to tap into the Mississippi’s ancient power to build new land as a way to reverse coastal erosion and ease the threat of rising seas.

Engineers hope to remake some eroded marshes by cutting into the levees and siphoning off sediment-rich water that can be channeled into coastal basins. When the sediment settles out of the water, it will slowly accrue into soil.

“The fundamental problem in coastal Louisiana is that lack of sediment, and so we’re trying to mimic the way Mother Nature would have delivered that sediment to our coast in the past,” said Bren Haase, who leads the state’s Coastal Protection and Restoration Authority.

Some skeptics question whether the idea poses its own environmental risks. But if it works, the project will restore a crucial buffer against storm surges and offer new habitat for migratory birds and fish that rely on wetlands. 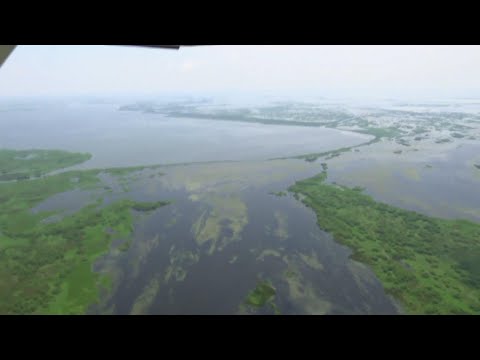 Saltwater is eating away at the coast, accelerated by a network of canals cut for oil and gas development, navigation and logging. The state estimates that it has lost just over 2,000 square miles of land _ a tract about the size of Delaware _ since 1932. If nothing is done, as much as 4,200 square miles could vanish over the next 50 years depending on sea level.

Using the river to rebuild the coast has been discussed for decades, but it was not until settlement money from the 2010 BP oil spill became available that plans began in earnest. The explosion killed 11 people on a rig leased by BP and resulted in millions of gallons of oil spewing into the gulf for three months.

Louisiana is putting much of its share of the settlement toward coastal restoration, including spending a little more than $2 billion on two projects dubbed Mid-Barataria and Mid-Breton for the bodies of water in which they will be placed.

One of the key advantages of the sediment-diversion system is that it can operate continuously for decades, as opposed to dredging, which involves a onetime effort to scoop sediment from one location and deposit it in another.

“For a dredge project, we may be talking 100 acres, 200 acres or 1,000. We’re doing some of the bigger dredge projects we’ve ever done before, but we’re still talking low thousands. Diversions have the potential for tens of thousands of acres,” said Brad Barth, sediment diversion program director with the CPRA.

As the diverted river water drains from the basin, the sediment settles out and begins accumulating. Over time, it piles up, first under the water and then emerging above the surface. Eventually, vegetation such as marsh grass or willow trees can take root.

State officials are in the permitting process. The earliest start to construction would be in 2021 or 2022. But an airboat tour through the marshes created by an existing diversion project gives a hint of what might lie ahead.

The Davis Pond Diversion was built to channel freshwater from the Mississippi into Barataria Bay to balance out salinity levels that have risen as Gulf water encroached. The diversion carries a fraction of the water that the two larger projects will, and building land was not the goal but a happy byproduct.

Where there used to be open water, grass and willows now grow on a ridge. The land is so dense that a person can walk on it _ a major change in about a decade, said Rudy Simoneaux, a state coastal engineer.

When it comes to the Mid-Barataria project, the time frame for land emerging above the surface would depend on a lot of factors such as water levels in the Mississippi. But Simoneaux said results could be evident in five years.

Not everyone is as eager.

Robert Campo’s family has been in the fishing industry since 1903. Fishermen still come to his dock in Shell Beach to buy brown shrimp for bait.

Campo and others worry the diversions will flood their fishing areas with dirty Mississippi river water, destroying an industry vital to the state’s economy and culture. Shrimpers worry they’ll have to travel much farther to fish; oystermen worry about losing millions of dollars invested in oyster reefs.

“We all want coastal restoration. Trust me, I’m a big advocate for it. I think we need to rebuild this whole coast. But there’s other ways of doing it ... with minimal effects to our fisheries,” Campo said.

Fed by rain and melting snows in the Midwest, the Mississippi ran unusually high for months earlier this year. The Army Corps of Engineers twice opened the Bonnet Carre Spillway, which protects New Orleans’ levees by channeling huge amounts of river water into normally brackish Lake Pontchartrain, a huge tidal basin that drains into the Gulf.

Skeptics question how much land will be built. R. Eugene Turner, a professor at LSU’s Department of Oceanography and Coastal Sciences, has argued in a recent study that existing diversions _ including Davis Pond _ have led to overall land loss.

Haase, from CPRA, said operators will have much more control over the diversion systems than they have over the spillway. A system of monitors will alert them to how the ecosystem is responding so they can make changes.

He said the federal permitting process will help identify areas, such as oyster grounds, that might be affected by the diversions, so the state can help them.

“If we’re going to get to where we think we need to get on our coast, bold action is required,” Haase said. “These are bold projects.”