DES MOINES, Iowa (AP) — As some communities along the Missouri River start to shift their focus to flood recovery after a late-winter storm, residents in two Iowa cities are stuck in crisis mode after their treatment plants shut down and left them in need of fresh water.

Tanker trucks from the Iowa National Guard and a private company are hauling water into Hamburg and Glenwood, said Lucinda Parker, a spokeswoman with Iowa Homeland Security and Emergency Management. Many evacuated from flooded areas in the southwestern part of the state are staying in shelters or with family and friends in the wake of the flooding and water struggles it has caused.

“The water is starting to go down in communities and they’re looking at how they’re going to start their recovery,” Parker said Wednesday.

Trucks are hauling about 300,000 gallons (1.1 million liters) per day to Glenwood’s water treatment plant from the neighboring cities of Red Oak and Shenandoah, according to the state Department of Natural Resources. Grocery store chains Hy-Vee and Fareway also have provided truckloads of bottled water.

Mike Wells, superintendent of the Hamburg Community School District, said one of the biggest concerns about having no fresh water is staying clean. The school district has coordinated providing buses for residents to ride 25 miles (40 kilometers) to Shenandoah or 10 miles (16 kilometers) to Sidney to shower. A local ministerial society has been picking up residents’ laundry at the school district, taking it to Shenandoah to wash it, and returning it. 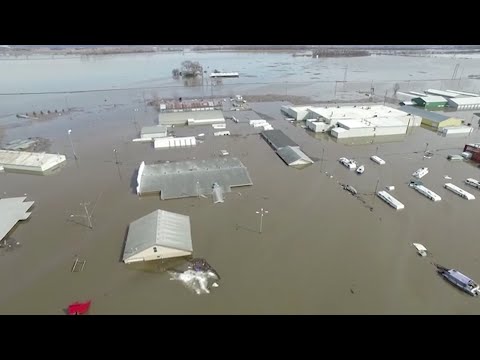 He said school would resume Thursday because it’s important for children to get back into their routine. He said the first half of the school day will be regular classes, but in the afternoon students will help collect laundry, deliver water, check on older residents and help provide food to those who need meals.

“This is a great opportunity to learn real life,” Wells said.

The surging waters have damaged hundreds of homes in the Midwest and been blamed for at least three deaths — two in Nebraska and one in Iowa. The flooding led to trains being halted in Missouri, creating transportation problems for both people and products. It also has taken a heavy toll on agriculture, inundating tens of thousands of acres, threatening stockpiled grain and killing livestock.

Scientists say climate change is responsible for more intense and more frequent extreme weather such as storms, floods, droughts and fires, but without extensive study they cannot directly link a single weather event to the changing climate.

Flooding hit Hamburg and Glenwood, which combined have about 6,000 residents, after the storm. Hamburg evacuated over the weekend. So did a portion of Mills County near Glenwood. Officials said the communities’ water supplies became compromised.

Water quality suffers during flooding even for areas not directly affected by floodwater. In Des Moines — which gets its water from two rivers that are flooding, though not as much as the Missouri River — levels of ammonia and other contaminants rise during floods. That may require increased use of chlorine to disinfect the water “and a careful balancing act not to overtreat,” said Water Works CEO Bill Stowe.

The water utility that serves about 500,000 central Iowa customers also at times deals with high levels of nitrate from farm fertilizer runoff, but the volume of water has diluted that impact and isn’t currently a concern, Stowe said.

Iowa Gov. Kim Reynolds said she would be asking President Donald Trump for an expedited disaster declaration. She said officials in her state were gathering damage estimates first.

National Weather Service hydrologist Kevin Low said during a telephone briefing Wednesday that “major and perhaps historic” flooding is possible later this month at some spots on the Big Sioux and James rivers in South Dakota and northwestern Iowa.

Parker, the state Homeland Security and Emergency Management spokeswoman, said even though southwestern Iowa was hit hardest in the state during this round of flooding, there are concerns of more widespread flooding ahead.

“We’re definitely not out of the woods,” she said, before later adding, “So take this opportunity to get prepared.”

Check out the latest developments on flooding in the Midwest.