Elon Musk, SEC told to meet for at least 1 hour about tweets

DETROIT (AP) — A federal judge in New York has ordered Tesla CEO Elon Musk and U.S. securities regulators to meet for at least an hour to try and settle a dispute over Musk’s tweets.

Judge Alison Nathan also told both sides Friday to send her a letter by April 18 saying whether they have reached a deal. If they don’t, Nathan will decide on the Securities and Exchange Commission’s motion to find Musk in contempt.

The SEC wants Nathan to fine Musk for allegedly violating a court-approved settlement requiring his tweets to be approved by a lawyer if they disclose important company facts. Musk’s lawyers say he didn’t violate the settlement.

The judge also wrote that if Musk is found in contempt, both sides will write legal briefs about his punishment.

The order comes after Nathan urged both sides to agree at a hearing on Thursday in New York that Musk attended.

SEC attorney Cheryl Crumpton recommended fines for Musk if Nathan finds him in contempt of the October settlement. The SEC alleges that Musk blatantly violated the settlement with a Feb. 19 tweet about Tesla vehicle production that wasn’t approved by the company’s “disclosure counsel.” The agency contends that Musk hasn’t sought the lawyer’s approval for a single tweet.

But Musk attorney John Hueston told the judge that the SEC had failed to show his client had violated the deal. He said Musk does what he is told and is “somebody trying his best to comply.” 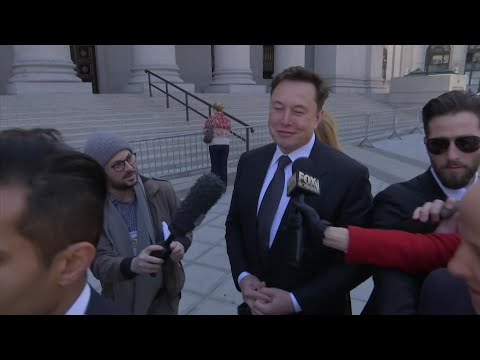 Musk’s lawyers say his tweet that Tesla would produce around 500,000 vehicles this year didn’t need pre-approval because it wasn’t new information that would be meaningful to investors. His attorneys said the SEC was violating his First Amendment rights to free speech.

In a statement after the hearing, Musk signaled he is willing to work out a deal.

“We have always felt that we should be able to work through any disagreements directly with the SEC, rather than prematurely rushing to court,” he said.

The issue over Musk’s tweets goes back to a settlement reached last year after Musk tweeted that he had secured the funding to take Tesla private at $420 a share — a substantial premium over the price at the time — when he did not. That tweet, last August, sent the company’s stock on a wild ride. The SEC says it hurt investors who bought Tesla stock after the tweet but before they had accurate information.

Musk later backed off the idea of taking the company private, but regulators concluded he had not lined up the money to pull off the deal.