WASHINGTON (AP) — Joe Biden came to the debate stage with stats and one-liners aimed at the feisty group of challengers. But the weapon he used the most was just two words: Barack Obama.

On health care, immigration, and civil rights, Biden deflected blows from Democrats by invoking the policies and the popularity of the first black president. When it worked, Biden argued forcefully for saving and improving on Obama’s signature policies on health care or climate change. At other times, Biden risked appearing trapped in a past many in his party have moved beyond.

“It looks like one of us has learned the lessons of the past, and one of us hasn’t,” Julián Castro, Obama’s housing and urban development secretary, said to Biden in a memorable tussle over the Obama administration’s deportation of immigrants. Biden declined to criticize Obama’s immigration policies. Castro, tapping into many liberals’ deep frustration on the issue, was eager. “What we need are politicians that actually have some guts on this issue.”

Such is the burden and the blessing of Obama for Biden. The former vice president owes his title and his front-runner status to the former president. But it’s far from clear that running as an unwavering Obama loyalist is enough to inherit Obama’s winning coalition of voters. 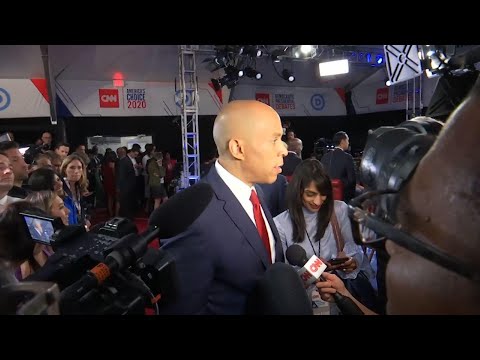 The base of the party has moved left since he moved out of the White House. As popular as Obama remains with Democrats, many of the young people, women and progressives who lined up for him are more than ready to turn the page. Biden showed Wednesday he’s not going to do it for them.

That is the tension that drove both nights of debates in Detroit between all 20 Democrats vying to take on President Donald Trump. On Tuesday, the fight was between purists — Sens. Elizabeth Warren and Bernie Sanders — and a cast of lesser-known pragmatists. Warren and Sanders both argued for big ideas and bold plans — “Medicare for All,” free college — while others pushed for plans they claimed were better grounded in reality.

On Wednesday, it showed through as nearly every Democrat on stage targeted Biden, the most prominent pragmatist there, piling on the attacks on his record and suggesting he should step aside for new ideas.

California Sen. Kamala Harris hit Biden for his health plan that preserves “Obamacare” and builds on it, arguing it didn’t go far enough and would leave millions uninsured. Both Castro and New York Mayor Bill de Blasio pressed Biden on deportations. When Biden declined to discuss his counsel to Obama on the matter, New Jersey Sen. Cory Booker cried foul.

“Mr. Vice President, you can’t have it both ways. You invoke President Obama more than anybody in this campaign. You can’t do it when it’s convenient and then dodge it when it’s not,” he said.

When de Blasio asked Biden about his role in police brutality and civil rights issues, a frustrated Biden referred back to Obama again.

“I find it fascinating everybody is talking about how terrible I am on these issues,” Biden said. “Barack Obama knew exactly who I was. He had 10 lawyers do a background check on everything about me on civil rights and civil liberties, and he chose me, and he said it was the best decision he made.”

That argument has been working for Biden with at least one key slice of the Democratic coalition. Polls show he has strong support among black voters, well ahead of Harris and Booker, the two black candidates in the race.

In South Carolina, where some two-thirds of the Democratic primary electorate is black, Biden has the support of 51% of African American Democratic voters, according to a recent Monmouth University poll. Harris landed at 12%.

But there may be limits for Biden in relying on his association with Obama. It’s not enough for some young voters, including the young black voters Biden needs to push to the polls if he wants to avoid the fate of Hillary Clinton, another Obama loyalist.

“For a certain set of people, older black voters, Obama is golden. That’s all you need to hear,” said Branden Snyder, the 32-year-old executive director of Detroit Action, a group that organizes people of color. Snyder noted Obama campaigned for Clinton in Detroit, but the city still saw turnout drop and Michigan go for Trump. For voters roughly 45 and younger, “we’ve seen this before.”

“The promises that were made, by and large, weren’t met,” he said, citing immigration and the uneven economic recovery that followed the housing crash. “We want the understanding of what will be different, of what your plan is.”

Harris and other Democrats have tried to lay their own claim to Obama’s legacy. Harris attacked Biden on his career before Obama, claiming the former president would not have sided with Biden in his opposition to federally mandated busing to desegregate schools, or in his willingness to work with segregationist senators.

Biden’s campaign says they have no concerns about his close alignment with the former president. On Thursday, he expressed bewilderment at the beating Obama’s legacy took.

“I hope the next debate we can talk about our answers to fix the things that Trump has broken, not how Barack Obama made all these mistakes,” Biden said. “He didn’t. He didn’t.”

Biden’s resistance to the party’s leftward drift may help him win traction with other key pieces of Obama’s winning coalition — white working-class and union voters who tend to be moderate on immigration and economic issues.

That may help explain Biden’s most notable split from Obama — a break on trade policy. The former vice president declared Wednesday he would not rejoin Obama’s massive Trans-Pacific Partnership trade deal as it was negotiated. He also suggested he would reject and renegotiate Trump’s new version of the North American Free Trade Agreement.

Upon hearing that, de Blasio showed clear surprise: “I consider that a victory,” he said.

Hennessey is a national political editor for The Associated Press. She has covered Congress, politics and the White House since 2009.