CLEVELAND (AP) — Two neighbors died from gunshots while two children found dead in one of the victim’s home died from smoke inhalation from a fire set in the house, a coroner said Wednesday.

Police later said they had taken a man into custody and planned to reveal more about aggravated murder charges they plan to file during a news conference on Thursday.

The man’s identity wasn’t released and few other details have been revealed about the Tuesday morning discovery of the bodies. Relatives said the two neighbors, a man and a woman, didn’t really know each other.

Officers first found David Cousin Jr. shot to death in a vacant lot and then found the bodies of the three others in a nearby house where they smelled smoke inside, police said. Officers said they went in the house after seeing the children through a window.

The Cuyahoga County Medical Examiner’s Office identified the youngest victims as 2-year-old Aubree Stone and 6-year-old Armond Johnson Jr., but it did not indicate their relationship with Collins.

Family members of both victims told cleveland.com that Collins was a house cleaner who was raising her two children and Cousin owned a home remodeling company. 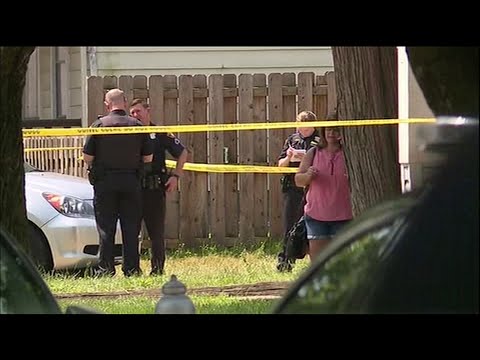