NEW YORK (AP) — Power to hundreds of thousands of homes and businesses has been cut off, affecting millions of people in California.

Pacific Gas and Electric Co. said a forecast of extreme wind and dry weather has created fire danger of an unprecedented scope, prompting it to initiate the largest preventive outage in state history to reduce the risk of wildfires sparked by faulty power lines.

Here are some questions and answers about the outage :

HOW LONG WILL THE POWER BE OUT?

PG&E has estimated the power could be out for as long as five days in some places. The company said it can’t switch the power back on until its equipment is inspected for damage and repaired.

TURNING OFF THE POWER, AVOIDING LIABILITIES

While PG&E and other California utilities have shut off power proactively before a fire, the scope of PG&E’s power outage appears unprecedented.

The power shutoffs are part of a wildfire prevention plan PG&E released in February, after its equipment sparked thousands of wildfires that killed dozens of people. The new plan included other ways to reduce the possibility of its power lines causing fires, including more aggressive vegetation management, replacing bare overhead high-voltage wires with insulation, replacing wood poles with less flammable material and possibly moving a limited number of overhead power lines underground. 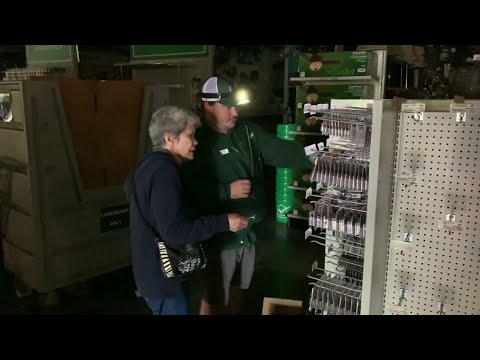 But those changes will take years to implement, and PG&E’s territory is facing wildfire threats that seem to grow every year.

“The main incentive that PG&E has for these public safety outages is to avoid liability, and specifically to avoid losses that it could potentially be found liable for,” said Steven Weissman, a lecturer at the University of California Berkeley Goldman School of Public Policy.

Edison’s equipment was blamed for starting 456 fires from 2014 to 2018, compared to the 1,986 started by similarly-sized PG&E. But like PG&E, Edison has been hit with lawsuits from wildfire victims who blame the utility for the damage.

Across the U.S., there are hundreds of thousands of above-ground power lines which use 19th-century technology, and “we really only do it now because it’s cheap,” Weissman said. “The fact that there are now these very large liabilities for losses coming from failure of the lines, arguably that ought to change the way we assess the cost of these things,” Weissman said.

Many European countries have buried their power lines underground, perhaps because they had to do a lot of rebuilding after World War II and saw the value after bombs destroyed the infrastructure, Weissman added.

PG&E buries about 30 miles of overhead power lines every year, and historically its undergrounding projects have been initiated by cities and counties for aesthetic reasons, Doherty said.

A better approach would be to figure out which parts of the power line pose the highest risk of wildfire and to bury those, Weissman said. “It still might not be enough unless they dramatically increase the amount of money they’re spending, but at least it could reduce the risk,” he said.

Despite the cost, some American utilities have acted more aggressively to bury power lines underground to limit casualties and damage after extreme weather. On the East Coast, Florida Power & Light spent $3 billion starting in 2006 installing concrete poles, hardening power lines and moving nearly 40 percent of its distribution system underground. Experts credit the company’s work for reducing the damage when the state was hit with subsequent hurricanes.

The cost of retrofitting eventually gets passed on to the utility’s customers, Doherty said.

“The cost of electricity is inevitably going up, because there’s no way you can pay for all this stuff that you’re going to have to do without charging a lot more for electricity,” said John MacWilliams, a senior fellow at Columbia University’s Center on Global Energy Policy.

About 26,000 miles of PG&E’s distribution lines are currently underground, but they are still vulnerable to damage from natural disasters, earthquakes and excavation, Doherty said, adding “undergrounding is not a panacea.”

WILL ANYONE PAY ME FOR MY SPOILED FOOD?