The Latest: Ex-tenants say building confused them, too

DALLAS (AP) — The Latest on the trial of a former Dallas police officer charged in the shooting death of her neighbor inside his apartment (all times local):

Former tenants of a Dallas apartment building where an off-duty police officer shot and killed a neighbor in his own home last year say they, too, got confused by how similar the floors looked.

The former building residents testified Friday after the now-former officer, Amber Guyger, took the stand in her own defense.

Guyger is charged with murder in the fatal shooting of 26-year-old Botham Jean last September. She says she mistook his fourth-floor unit for her own, which was right below Jean’s, and thought he was a burglar when she stepped inside the dark room.

Prosecutors have questioned how Guyger could have missed numerous signs that she was in the wrong place and have suggested that she was distracted by sexually explicit text messages with her police partner.

Prosecutors have asked a Dallas police officer who fatally shot her unarmed neighbor why she didn’t back away and use her police radio to call for help when she thought someone was in her apartment.

Amber Guyger explained Friday while testifying at her murder trial for the killing of Botham Jean that entering the home “was the only option that went through my head.” 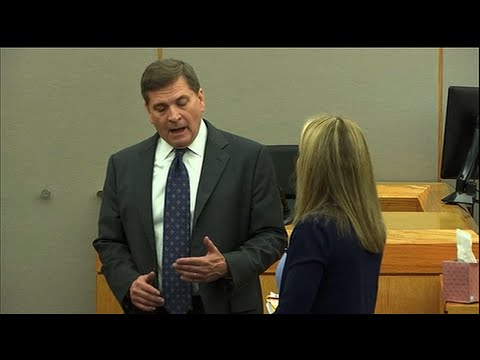 Guyger shot and killed Jean last September in his apartment, which was directly above hers. She says she mistook his unit for her own.

The 31-year-old Guyger, who was fired after the shooting, says it was dark in the apartment and that she shot the silhouetted person inside after he began approaching her and she couldn’t see his hands.

Guyger says she intended to kill Jean when she fired, believing he was a threat.

A former Dallas police officer says she was “scared to death” when she opened what she thought was her apartment door last year and saw a silhouetted figure standing in the darkness inside.

Amber Guyger testified Friday in her murder trial in the killing last September of Botham Jean, who was in his own home when Guyger shot him.

Guyger, whose apartment was directly below Jean’s, was off duty but in uniform at the time of the shooting.

She testified that as she put her key in the apartment lock, the door opened because it hadn’t been fully closed. She says she drew her service weapon because she thought someone was in her home, and then she told the silhouetted figure inside: “Let me see your hands! Let me see your hands!”

Guyger said she couldn’t see the person’s hands and that he began coming toward her at a “fast-paced” walk. She said he yelled, “Hey, hey, hey,” and that she then fired at him.

The former Dallas police officer who fatally shot her unarmed black neighbor in his apartment began crying and shaking on the witness stand as she started describing entering his home that night.

Amber Guyger, who is white, took the stand Friday in her murder trial in the fatal shooting last year of Botham Jean, whose apartment she said she mistook for her own.

Guyger’s lips quivered and she started to cry as her lawyer questioned her about approaching Jean’s door. The judge then called for a short break in the proceedings.

Guyger’s attorneys have said she fired in self-defense after mistaking the 26-year-old Jean for a burglar. Prosecutors have questioned how Guyger could have missed numerous signs that she was at the wrong apartment.

Gugyer, who was off duty but in uniform at the time, was later fired.

A white former Dallas police officer has taken the witness stand in her murder trial for shooting her unarmed, black neighbor in his apartment.

Amber Guyger’s testimony Friday will mark the first time the public has heard directly from the 31-year-old since she shot Botham Jean last September.

Guyger’s attorneys have called Jean’s killing a “tragic, but innocent” mistake. They say she fired in self-defense after confusing his apartment with her own and mistaking the 26-year-old accountant from the Caribbean nation of St. Lucia for a burglar.

Prosecutors have questioned how Guyger could have missed numerous signs that she was at the wrong apartment, and suggested she was distracted by sexually explicit phone messages with her police partner.

Gugyer, who was off duty but in uniform at the time, was later fired from the force.