The Art of the Walk? Summit collapse and Trump’s diplomacy

HANOI, Vietnam (AP) — President Donald Trump framed the breakdown of his nuclear summit with North Korea’s Kim Jong Un as wisely knowing when “to walk.” But the stunning collapse revealed the limits of his unique brand of personal diplomacy and raised concerns about future efforts to disarm a global threat.

Eyeing the history books and a much-needed political victory, Trump bet big on the two-day Vietnam summit only to be forced to explain away its sudden failure.

The president and North Korea gave conflicting explanations of what went wrong, though the result actually was a relief to some critics and even some Trump supporters who feared he might give too much away in pursuit of a deal.

Trump, the businessman who was elected in part on his boasts of deal-making prowess, said a proposed agreement was “ready to be signed.” But he said he refused to accept what he described as North Korean insistence that all U.S. sanctions be lifted without the North committing to eliminate its nuclear arsenal.

“I’d much rather do it right than do it fast,” the president said. “We’re in position to do something very special.”

The North said it had demanded only partial relief from the punishing sanctions.

Trump had pushed for the summit, telling wary aides that his personal chemistry with North Korea’s young and reclusive leader outweighed any need for detailed, staff-level talks to iron out differences before either head of state set foot in Hanoi. 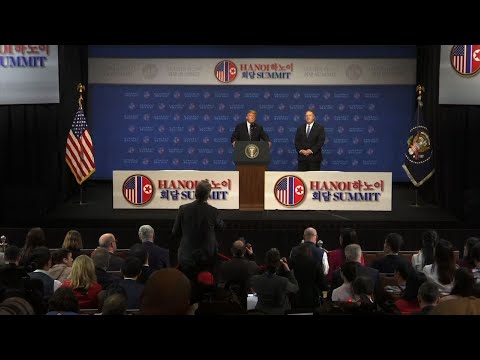 Secretary of State Mike Pompeo, who along with his special envoy for North Korea, Stephen Biegun, had been leading the preparatory effort, said staff work had achieved some results but that negotiators had intentionally left some of the most contentious issues unresolved.

“We were hoping we could take another big swing when the two leaders got together,” he told reporters as he flew from Vietnam to the Philippines after the summit collapsed. “We did. We made some progress. But we didn’t get as far as we would have hoped we would have gotten.”

Pompeo noted that “when you are dealing with a country that is of the nature of North Korea, it is often the case that only the most senior leaders have the capacity to make those important decisions.”

Echoing the refrain that “no deal is better than a bad deal” — often used during the Obama administration by critics of its Iran negotiations — there was relief in some quarters that the president had not impulsively agreed to concessions without much in return.

“Kudos to him for walking away from the table,” said Jonathan Schanzer of the Foundation for Defense of Democracies, a Washington think-tank that has been highly skeptical of Trump’s efforts with Kim Jong Un. “No deal is, in fact, better than a bad deal.”

And White House aides stressed that Trump stood strong. Some observers evoked the 1987 Reykjavík summit between Ronald Reagan and the Soviet Union’s Mikhail Gorbachev, a meeting that ended without a nuclear weapons deal but laid the groundwork for a future agreement.

Long-standing U.S. policy insists that American sanctions on North Korea will not be lifted until that country commits to, if not concludes, a complete, verifiable and irreversible end to its nuclear weapons program.

Trump, who did not consult with allies South Korea and Japan before breaking off the talks, declined to restate that goal Thursday, saying he wanted to retain flexibility with Kim.

But North Korea’s foreign minister, in a rare news conference, said that Trump wasted an opportunity that “may not come again” and that the North’s position wouldn’t change even if there was another round of dialogue.

The failure in Hanoi laid bare a risk in Trump’s negotiating style: Preferring one-on-one meetings with his foreign counterparts, his administration doesn’t always do the staff-level advance work intended to make a summit more of a victory lap than a negotiation.

“The developments over the past 48 hours highlight in stark fashion the inherent weaknesses of President Trump’s preference for summit diplomacy — international media spectacles that have failed to achieve substantial progress on the key issues, especially denuclearization,” said Paul Haenle, the director of the Carnegie-Tsinghua Center for Global Policy.

Michael Fuchs, who worked on Asian issues as a State Department official under Obama, said there should be no more summits until the two sides are ready to announce a concrete agreement. “Let the real negotiators from both sides get to work,” he said. “Until then, no more reality TV summitry.”

One beneficiary of the Vietnam summit may have been the North Korean leader.

The first Trump-Kim meeting in Singapore gave the reclusive nation’s leader an entry to the international stage. The second appeared to grant him the legitimacy his family has long desired.

Kim, for the first time, affably parried with the international press without having to account for his government’s long history of oppression. He secured Trump’s support for the opening of a liaison office in Pyongyang, without offering any concessions of his own. Trump’s backing for that step toward normalization provided the sort of recognition the international community has long denied Kim’s government.

Experts worried that the darker side of Kim’s leadership, was being brushed aside. That includes massive human rights abuses, prison camps filled with dissidents, an absence of religious and speech freedoms and the executions of government and military officials.

Trump also appeared to accept the North Korean leader’s assertion that he had nothing to do with the 2017 death of Otto Warmbier, an American college student who was imprisoned for allegedly taking a propaganda poster while on a visit to the country.

The president said he took Kim “at his word” that he was unaware of the mistreatment Warmbier was subjected to in custody, a remark that drew widespread criticism, even from Trump’s former U.N. ambassador.

“Americans know the cruelty that was placed on Otto Warmbier by the North Korean regime,” former Ambassador Nikki Haley said.

Still, Robert Gallucci, who negotiated with North Korea as a senior State Department official during the Clinton administration, said the unorthodox way in which the two North Korea summits were organized, may not have been a mistake given the unusual nature of the two leaders.

“It does have its down sides, and we just experienced the down side,” Gallucci said. However, Hanoi wasn’t a total disaster as long as the two sides are willing to keep at it.