LAS VEGAS (AP) — Hundreds of people waited for hours at three in-person voting sites in the Las Vegas area, and the only one in Reno, after polling places were reduced due to the coronavirus.

People who did not mail in their choices were still casting ballots Wednesday in a primary to settle U.S. House races, legislative primaries and other state and local races. State election officials promised that everyone in line when polls closed at 7 p.m. Tuesday would be allowed to vote, and predicted long delays counting ballots as a result.

The Republican secretary of state’s office responded to criticism from a Democratic Party leader about long lines and limited in-person polling places with a statement saying Nevada voters had “ample opportunity ... to cast a ballot in the 2020 Nevada primary election.”

Deputy Secretary of State for Elections Wayne Thorley said that ballots were mailed to “every registered voter in Clark County,” voters had 14 days of early voting.

The top-ticket races featured contests for Nevada’s four U.S. House seats, but the incumbents — three Democrats and a Republican — were expected to easily overcome primary challenges. 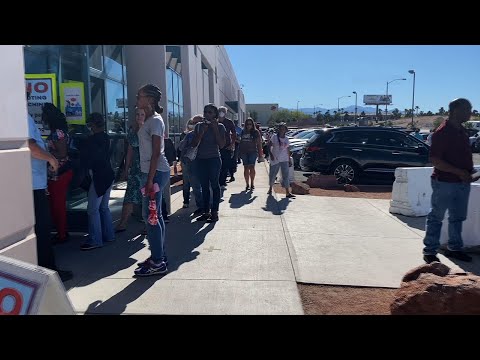 In northern Nevada, Republican Mark Amodei was expected to easily fend off two challengers to his 2nd District seat while seven Democrats sought to challenge him.

“When I first got here, they said it was going to be an hour. I was like, ‘OK,’” Charles Wallace said after waiting from 11:30 a.m. to 4:30 p.m. at county elections headquarters in North Las Vegas. “And once I got in, there was like a long, long, long line.”

Across town, Steve Connolly was the last person to make the loose queue snaking through a park outside a community center. About half those in line, including Connolly, wore face coverings as a precaution against the coronavirus pandemic that prompted election officials to encourage people to cast ballots by mail.

At the front, college students Claire Carpenter and Mya Mitchell entered a community center with 10 stations at which they would have ballots printed for them to vote. Their wait had been almost five hours, but they credited election officials with offering water and snacks to those waiting with them.

Secretary of State Barbara Cegavske’s plan to convert the primary to mostly mail-based balloting — an effort to limit crowds that can spread the coronavirus — called for at least one polling place in each of the state’s 17 counties.

“Had the secretary of state gotten her way and Clark County voters were limited to just a single polling location, these wait times would have been even longer,” McCurdy said. “We will continue fighting ... to prevent a repeat in November should we find ourselves under the same circumstances.”

In Washoe County, hundreds of people were in line at 7 p.m., and Spikula projected more than 1,400 in-person ballots would be cast at the site on Tuesday. In most elections, most precincts handle no more than 600 ballots, she said.

Spikula said county staff had to clear the polling place several times to accommodate voters who refused to wear masks or have their temperatures taken as a screening for fever, a symptom of COVID-19. She called the time-intensive procedure necessary to allow everyone to vote, including those unable to wear masks for health reasons.

Ed Cohen, a candidate in the Democratic primary for Congress, said most people he encountered in line were Republicans voting in person because they said they didn’t trust mailed ballots would be counted.

Lily Baran was last in line in Reno. She said she didn’t understand why Nevada officials limited the number of polling places but opened the state’s casinos.

“We can suddenly gamble and eat sushi. Then, I think we can also vote in more locations,” she said.