The Latest: UN views annexation of the Golan ‘null and void’

The U.N. Security Council in a December 1981 resolution called Israel’s annexation of the Golan Heights “null and void and without international legal effect” — and the U.N. says Secretary-General Antonio Guterres (goo-TEHR’-esh) adheres to council resolutions.

Guterres said in a report on recent activities of the U.N. peacekeeping force on the Golan Heights that he was “gravely concerned” at escalating tension there between Israel and Syria. He circulated the report on Monday to the Security Council.

The secretary-general singled out three incidents between Syria and Israel between Nov. 20 and Feb. 11.

Cavusoglu said on Twitter on Monday that the decision would “never legitimize Israeli occupation.”

The minister said: “The decision will further increase tensions in the region by preventing peace efforts in the Middle East.” 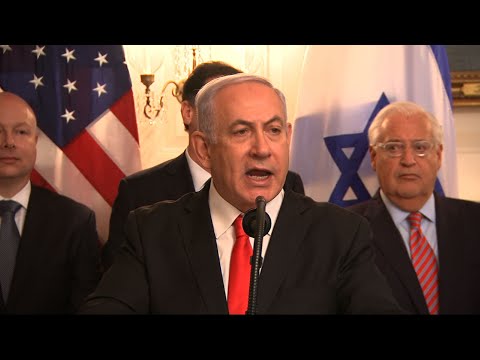 President Donald Trump signed a proclamation Monday recognizing Israel’s sovereignty over the Golan Heights, which Israel occupied in 1967 and unilaterally annexed in 1981.

Lebanon says the decision by President Donald Trump to recognize the Golan Heights as Israeli territory undermines any efforts to reach a fair peace and further isolates Israel.

Lebanon’s foreign ministry said Monday that the Golan Heights are “Syrian Arab” territory and “no country can falsify history by transferring” land from one country to another.

Lebanon is technically at war with Israel, which occupied parts of southern Lebanon until it withdrew in 2000. Lebanon says Israel is still occupying the disputed Shebaa Farms and Israel considers the Lebanese Hezbollah group a strategic threat.

Syria says President Donald Trump’s recognition of Israeli sovereignty over the Golan Heights makes Washington “the main enemy” of Arabs, and the Damascus government is calling the U.S. decision a “slap” to the international community.

Trump has signed a proclamation recognizing Israel’s sovereignty over the Golan, which Israel occupied in 1967 and unilaterally annexed in 1981.

Syria’s Foreign Ministry calls the decision a “blatant aggression” on its own sovereignty and territorial integrity. The ministry says the U.S. move represents the “highest level of contempt for international legitimacy.”

The U.N. Security Council refers to Israel as “the occupying power” and says Israel’s attempt to “impose its laws, jurisdiction and administration in the occupied Syrian Golan Heights is null and void and without international legal effect.”

Trump’s decision reverses more than a half-century of U.S. policy.

And the Israeli leader is joking that he hopes “they don’t open an investigation” as a result. Back home, Netanyahu is facing a pending indictment on corruption charges.

And Trump has been the subject of numerous investigations, but is claiming vindication following the release of a summary of special counsel Robert Mueller’s report.

Netanyahu made the offer after Trump signed a proclamation recognizing Israel’s sovereignty over the Golan Heights.

Netanyahu says he brought Trump a case “of the finest wine from the Golan.” But he says Trump, who doesn’t drink alcohol, is “not a great wine drinker,” and that he wanted to give the wine to Trump’s staff instead.

Netanyahu spoke during a meeting at the White House with President Donald Trump, who later signed an official proclamation formally recognizing Israel’s sovereignty over the Golan Heights.

The prime minister says he plans to return to Israel after the meeting with Trump.

Trump had previewed the move in a tweet last week that it was time for the U.S. to take the step after 52 years of Israeli control of the strategic highlands on the border with Syria.

Netanyahu has pressed for such recognition for months. Trump’s action gives him a political boost just weeks before what’s expected to be a close Israeli election.

Israel captured the Golan from Syria in the 1967 Mideast war but its sovereignty over the territory is not recognized by the international community.

Netanyahu describes Monday morning’s rocket launch that struck a home in central Israel as a “criminal attack” and he’s pledging to strike back hard. He says he’ll return to Israel to handle the crisis shortly after his meeting with President Donald Trump.

Netanyahu arrived in Washington on Sunday for what was to have been a three-day visit. He was going to speak at the American Israel Public Affairs Committee’s policy conference and was to be hosted at a White House dinner.